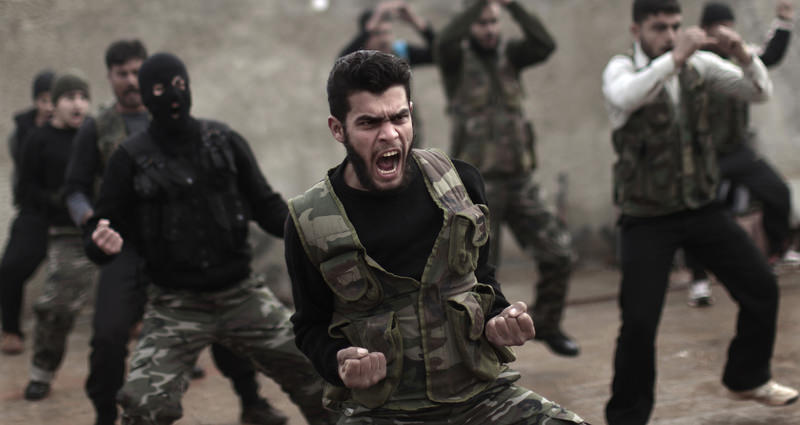 As the U.S.-led train-and-equip program for moderate Syrian opposition forces continues, British troops have reportedly arrived and begun training newly arrived groups in the central Anatolian city of Kırşehir. A senior official from the British Defence Ministry confirmed their support for the program by providing 85 officers from the British Army

While the U.S.-led train-and-equip program for moderate Syrian opposition forces has been continuing gradually in the central Anatolian city of Kırşehir, local sources reported that British troops have also arrived in the city and have started to train newly arrived groups. A senior official from the British Ministry of Defence who spoke to Daily Sabah confirmed the U.K.'s support for the program and added that a total of 85 officers from the British army will contribute to the program.

The U.S.-led train-and-equip program has gotten off to a slow start since its approval by U.S. Congress in September 2014, and has faced many setbacks. After several months of delays due to logistical problems, the program commenced in Turkey's Kırşehir province in May, and after completing a training regimen, a total of 54 Syrian opposition fighters were sent into Syria earlier in July. Questions about the future of the program increased after the first group, Division 30, was overwhelmingly defeated in a pitched battle with the al-Qaida-linked terror group Nusra Front, with over half of the soldiers, including the commanding officer, taken captive in recent weeks. Despite these setbacks, U.S. officials denied reports that claim the U.S. is giving up on the program and underlined their determination to continue it.

"We need to continue to train and equip these individuals and build up the capacity of those forces," the outgoing Army Chief of Staff Gen. Ray Odierno said on Aug. 13, emphasizing that the U.S. "remains focused" on the program.

The U.K.'s vital support for the program came amid ongoing discussions about the future of the program. A senior official from the British Ministry of Defence in London who spoke to Daily Sabah confirmed their participation and added that a total of 85 officers from the British army will contribute to the program. Due to security reasons, a senior official did not provide further details about how many of the total 85 staff will be allocated in Kırşehir or how many of them have already arrived in Turkey. But local sources confirmed that British troops had arrived in recent days and have already started to train the second group of moderate Syrian forces.

The U.K's support for the program was first announced by U.K. Minister of Foreign Affairs Philip Hammond last November. "We are providing non-lethal equipment and the U.K. expects to make a significant contribution to the U.S.-led train-and-equip program," Hammond said in a statement, adding that "[Syrian President Bashar] Assad can play no future role in Syria." Regarding this issue, Foreign Minister Mevlüt Çavuşoğlu said in June that the U.K. has extended its support to join the program. "In principle, we are open to British support, but we [with the U.K.] have not decided on the area in which it will give support," Çavuşoğlu said on June 4.

The train-and-equip program is an American effort to combat the Islamic State of Iraq and al-Sham (ISIS) and other terrorist organizations in Syria to set conditions for a negotiated settlement to Syria's civil war, according to U.S. Congressional reports. The program has already been granted a $500 million budget with an additional $80 million in Defense Working Capital Funds for related U.S. government operations. Accordingly, the intention is for the program to field a force of approximately 3,000 vetted Syrians in 2015, and 5,400 others per year in 2016 and, if authorized, in 2017.

The cost of the program has become approximately $41 million according to a report published by CNN on Aug. 18. "Nearly 17,000 Syrian men want to join, but the training is very slow. We need it to be faster, 30 days instead of 45 days. More trainees, for example, our training in Jordan did 85, we should have been 500 there and another 500 in Turkey," Abu Iskander, a member of the program, said to CNN in an interview.

Moreover, sources added that the new group of train-and-equip program participants has 70 soldiers due to graduate and are expected to be sent to Syria to fight ISIS and the other terrorist organizations shortly.

The provision of air protection for the train-and-equip groups while they are fighting on the ground has also long been a matter of discussion between the U.S. and Turkey. However, both sides have reached an agreement in recent days and on Aug. 4, the U.S. carried out its first airstrike from İncirlik Air Base in the southern city of Adana to protect soldiers. "We'll take action to defend the New Syria Force that we've trained and equipped," Pentagon spokesman Commander Bill Urban said, adding the airstrike "was the first one."
Last Update: Aug 21, 2015 6:21 pm
RELATED TOPICS