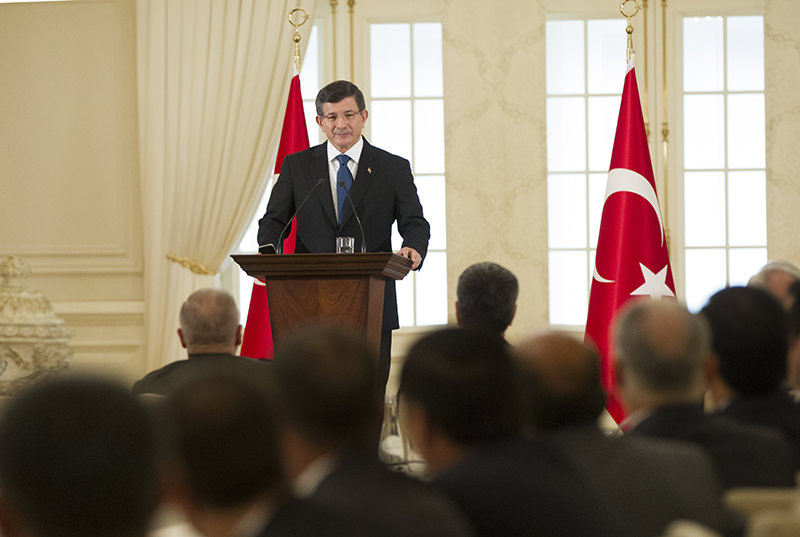 | AA Photo
by Nurbanu Kızıl Aug 24, 2015 12:00 am
Prime Minister Ahmet Davutoğlu said Monday that no plot will harm the fraternity between Kurds and Turks or Sunnis and Alevis, highlighting centuries-old bonds.

"No matter what type of a trap you set, and regardless of what your masters say, the brotherhood between Turks, Kurds, Sunnis and Alevis will last forever," Davutoğlu said, adding that the people of Anatolia and Mesopotamia are determined to teach a lesson to the terrorists who target peace and stability in the country and want to create chaos.

Addressing the village guards at Çankaya Palace, Davutoğlu called on all political parties and nongovernmental organizations to oppose all types of terrorism.

"The same way we have opposed ISIS terrorism, let us all come together and oppose PKK terrorism," Davutoğlu said, urging everyone to stand against religious and sectarian discrimination the same as discrimination based on ethnic grounds.

Davutoğlu said it is necessary for the issue to be discussed in a legal platform, and called everyone to join legitimate political grounds to evaluate the matter. He said they would stand in solidarity against violation of freedoms. "But whoever wants to exploit terrorism and use it in a way similar to the sword of Damocles, we will not hesitate to break that sword," Davutoğlu added.

Davutoğlu said Ankara will continue to have a determined stance against terrorism and the government has given instructions to mobilize against all forces that threaten citizens, obstruct public order and kidnap youth and force them to fight in the mountains. He said that for Ankara there is no difference between the PKK and ISIS and that the struggle against those who take the children of Anatolia and Mesopotamia hostage for their blind ideologies and exploit religious and ideological sentiment will continue with determination.

Turkey has been hit by violence since a suicide bomb attack by a suspected ISIS supporter killed 33 activists in Suruç on July 20.
Ankara has intensified its counterterrorism operations following the recent attacks carried out by the PKK, which is recognized as a terrorist organization by the U.S., EU and Turkey.

Formed in 1978, the terrorist group had been fighting the Turkish state for an independent country until the early 2000s. The group then shifted its goal to autonomy in predominately Kurdish regions of Turkey.

The PKK announced on July 11 that the cease-fire, which was declared in a message from the PKK's imprisoned leader Abdullah Öcalan in 2013, has ended.

The Turkish Air Force has been carrying airstrikes against the PKK in northern Iraq and ISIS militants in northern Syria.

According to military sources, over 800 terrorists were killed in the airstrikes on PKK hideouts and camps in northern Iraq.