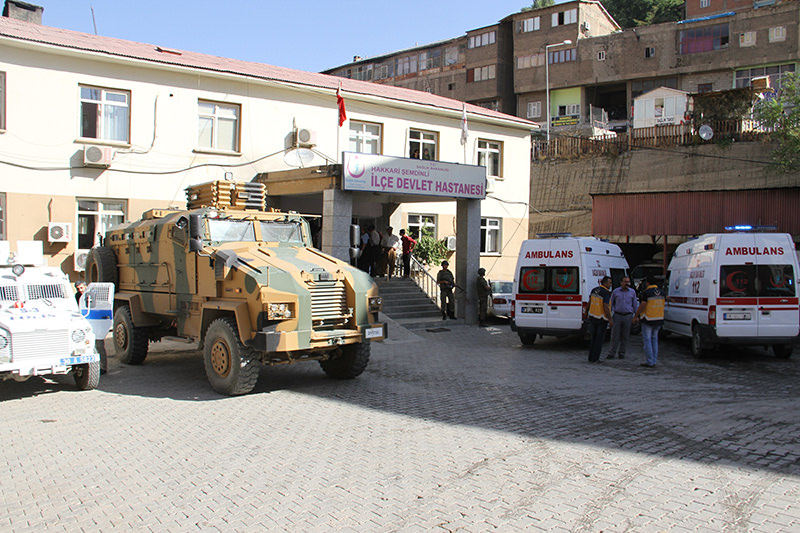 Soldiers who were wounded by the terrorist attack were transferred to u015eemdinli district hospital for treatment (AA Photo)
by Daily Sabah Aug 24, 2015 12:00 am
Two Turkish soldiers were killed and three wounded on Monday when the vehicle they were travelling in hit explosives which were buried by the terrorist organization PKK in the road near the town of Şemdinli in southeastern Hakkari province.

llegal materials used for bomb making have recently been found in a truck belonging to the Municipality of Van, which is ruled by the pro-Kurdish Peoples' Democratic Party (HDP), at a time when the party is scrutinized for hesitating to keep a distance from the PKK.

There have been claims that municipalities administrated by the HDP provide assistance to PKK by digging trenches and establishing roadblocks to claim control over cities. In Siirt province, HDP municipality reportedly dug the roads to enable PKK terrorists plant mines and paved it afterwards so that the PKK can blow them up when vehicles belonging to the Turkish Army pass by.

The Turkish Air Force has been carrying airstrikes against the PKK in northern Iraq and the ISIS militants in northern Syria.
240 PKK terrorists have so far surrendered to Turkish Armed Forces since July 24.