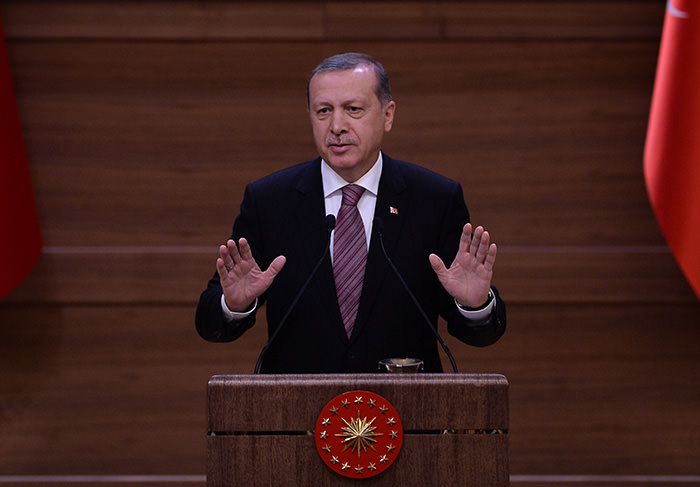 President Recep Tayyip Erdou011fan (AA Photo)
by Mehmet Çelik Aug 26, 2015 12:00 am
The upcoming snap elections will determine both the political and economic stability in Turkey, President Recep Tayyip Erdoğan said on Wednesday during his address to village heads at the Presidential Palace in Ankara, while adding that the political stability during the past 12 years was the reason behind Turkey's success as an emerging power.

Pointing out the efforts against terrorism, the president said, "When we shouldered the responsibility of managing Turkey, one of our priorities was to end terrorism."

President Erdoğan added that Turkey has overcome the denial policies against minorities, particularly against the Kurdish citizens with the reconciliation process, however, there have been parties that stand against such inclusive state policies.

Meanwhile, commenting on the economy and interest rates, he suggested a further lowering of the interest rates will make Turkey more attractive for investment.

"When you look at countries other than Turkey, you see that almost all of them have interest rates close to zero. When you look at the United States, the Fed's rates are between 0 – 0.25, same in Japan. Interest rates in Turkey need to be lowered further to attract investment. In critical moments, investments will be our way out [from economic crisis]," he said.

President Erdoğan Tuesday officially gave Prime Minister Ahmet Davutoğlu the mandate to form a caretaker government a day after calling for early elections. Justice and Development Party (AK Party) Chairman Davutoğlu's efforts to form a coalition government after the June 7 parliamentary elections came to naught after being rejected by the Republican People's Party (CHP) and the Nationalist Movement Party (MHP).

On Monday, at the end of the 45-day period allowed to form a coalition, Erdoğan called for early elections, which would be held on Nov. 1 as the Supreme Election Board (YSK) announced Tuesday. Davutoğlu now has five days to form a caretaker government. The AK Party will have 11 seats, while the CHP have six, MHP have three and pro-Kurdish Peoples' Democratic Party (HDP) have three in accordance with their number of deputies. Davutoğlu is first expected to approach the CHP and MHP, both of which have already declared their intention not to join the cabinet. Only the HDP has agreed to fill the three allocated spaces in the new cabinet.

Afterward, the prime minister is expected to directly reach out to CHP and MHP deputies and former deputies, senior bureaucrats and prominent intellectuals to fill the cabinet posts. The politicians he is expected to offer ministerial posts to are said to include former CHP chairman and current Antalya Deputy Deniz Baykal.

Once the cabinet is formed, Davutoğlu will visit the president for his approval and govern the country until after the Nov. 1 parliamentary elections. The HDP will be given Family and Culture Ministries, according to reports emanating from Ankara.
Last Update: Aug 26, 2015 4:52 pm
RELATED TOPICS