Why ambassador Edelman is wrong about the İncirlik deal 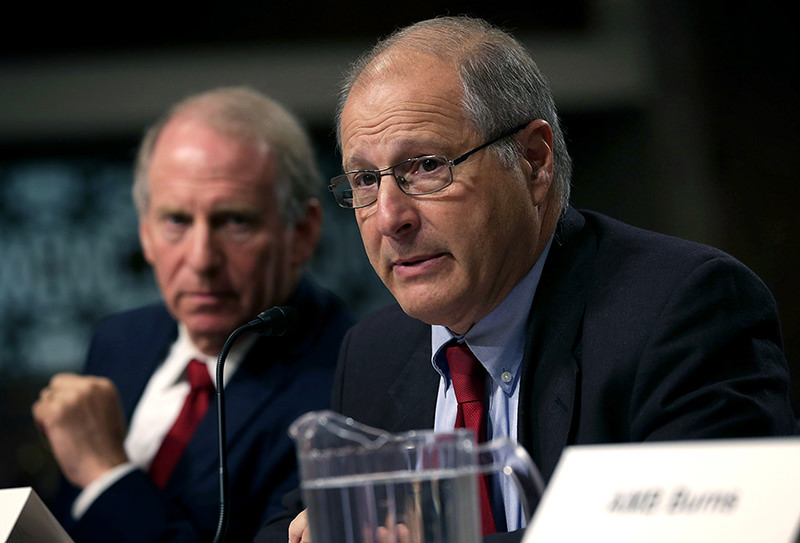 | AFP Photo
by Ragıp Soylu Aug 28, 2015 12:00 am
Former U.S. ambassador to Ankara Eric Edelman's latest article on Turkey in which he accuses Ankara of using the İncirlik deal as a pretext or lip service to attack the separatist PKK in northern Iraq troubled many due to its harsh tone and policy advice, including suspending intelligence ties with Turkish authorities and precipitating an economic crisis in the country.

Edelman, who was almost declared persona non grata by Ankara in 2005 in reaction to his statements seen as interfering in domestic Turkish politics and had to resign from his post, is not alone in criticizing U.S. President Barack Obama's administration for signing Turkey up for anti-Islamic State of Iraq and al-Sham (ISIS) coalition and using its bases for military operations, which substantially bolstered the airstrikes. U.S. officials welcomed it as a "game changer."

Yet Turkey, which has been resisting the opening of its bases for more than 10 months, had to sacrifice too many policy priorities, including a clear-cut safe zone in northern Syria and Syrian President Bashar Assad's removal from power by force, to meet American expectations and respond to increasing ISIS threats for the last six months. Turkey was also forced to change its view on the PKK's Syrian arm, the Democratic Union Party (PYD), and did not target the group in its airstrikes in Syria, recognizing the sloppy difference between the PYD and PKK for the first time.

"This recent agreement does not provide a comprehensive strategy. The agreement has to be broadened or else it will be a short lived effort that won't amount to much," Kadir Üstün, the director of the Foundation for Political, Economic and Social Research Washington branch, said in a panel held this month.

Despite the concessions it had to give, what Turkey would substantially get in return in this agreement is still not clear. Turkish officials repeatedly talked about a safe zone, which U.S. officials publicly made sure was not on the table. A senior Turkish official told Turkish reporters earlier this month that the U.S. "verbally" promised Turkey that PYD forces would not cross Jarablus and would not get complete control of the entire Syrian-Turkish border.
Blaming Turkey for taking advantage of anti-ISIS strikes to shadow its PKK operations and claiming that it would benefit the Justice and Development Party (AK Party) in the snap elections is not just factually wrong, it is also a conspiracy-ridden argument reminiscent of the movie "Wag the Dog."

Prime Ministry sources leaked the opening of İncirlik Air Base to the Turkish press before the June elections, roughly two months before the Turkish airstrikes on ISIS and the PKK. Following this announcement, in the very first weeks of July, PKK officials repeatedly said that the cease-fire with Turkey had ended due to Turkish inaction in the reconciliation process and Turkish support for ISIS. It is well-established that the PKK was the first party that caused bloodshed and ended the cease-fire. The PKK killed two police officers in their sleep in retaliation for the ISIS-linked Suruç suicide bombing that killed dozens of Turkish citizens. Later, one Turkish soldier and two other police officers with two civilians in different attacks, were killed by the PKK two days before the Turkish airstrikes against the militant group in late July.

Turkey's renewed war against the PKK also is not helping the AK Party in the polls. Multiple polling companies, including the one closely linked to the government, have said that the AK Party's votes would stay same or even decrease in the upcoming elections, making it sure that President Recep Tayyip Erdoğan will not get any super majority to support his causes in the new Parliament.

Another fact ignored by Edelman is that Turkey did not see the necessity to get permission from the U.S. for its airstrikes against the militant group, which is designated as a terrorist organization by both Washington and Brussels. Fox News earlier reported that Turkey notified American military officials about its airstrikes in Iraq "with 10 minute's notice." Turkish sources said that Turkey undertook these military operations with its national capabilities and gathered intelligence about ISIS and PKK targets on its own. "We didn't get any permission from anyone. We just notified them," a senior Turkish official said.

Oddly enough, Edelman's short-sighted calculus in the region still gives the utmost importance to the PYD, a sub-state actor that is tactically functional for U.S. interest in the region, and the PKK over long-time NATO ally Turkey. He intentionally does not mention the PKK's terrorist attacks against Turkish authorities by teenage suicide bombers that just this month killed dozens of soldiers and civilians.

So, what broke Turkey's resistance last month and forced it into a two-front war instead of these theories?

The Turkish motives are clear and they are not about the "faustian bargain" Edelman suggested in his article. "National security reasons are behind this," another senior Turkish official said. "We have been cracking down on the ISIS network in Turkey since January, in the meantime, ISIS threats against Turkey increased in their official magazines and social media accounts. Then they killed Turkish citizens in Diyarbakır, later in Suruç. The PKK also killed Turkish soldiers and police officers. We had to act."

In fact, ISIS suspected attacks cost many lives before the June elections in Diyarbakır, and the tipping point was the killing of a Turkish soldier in July by the extremist group that led to the Turkish military intervention in Syria for two days with airstrikes and shelling. U.S. State Department spokesman John Kirby told reporters this week that the U.S. asked Turkey to hold off on its airstrikes against ISIS until Turkey gets fully integrated into the coalition, which basically disproved the widespread criticism that Turkey did not bomb ISIS enough and focused more on the PKK.

U.S. and Turkish officials are strongly refusing that the İncirlik agreement and PKK airstrikes are connected. They say these two event simply coincided. "I understand why it is interesting for journalists. But both Gen. John Allen and ambassador Brett McGurk told me that those are not connected," a senior American official said.

İncirlik skeptics might need to take a fresh look at the facts and the course of events rather than depicting a democratically elected president as a devil. For sure, it would benefit Turkish-U.S. relations more than publishing politically motivated op-eds.