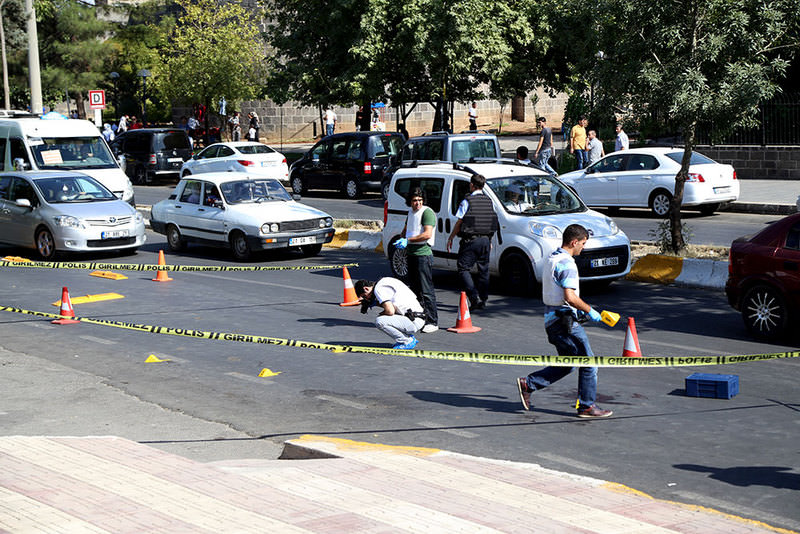 by daily sabah
Aug 31, 2015 12:00 am
A group of assailants opened fire on a pharmacy in the southeastern province of Diyarbakır on Monday, killing the former youth branch head of the ruling Justice and Development Party (AK Party), Yunus Koca.

Although no one has claimed the attack yet, it is widely believed that the attack was carried out by PKK terrorists.

Police units on Saturday uncovered a PKK arsenal at a cafe in Diyarbakır's Sur district. The PKK ammunition store was located in a log cabin in the cafe's garden. Security officials confiscated 12 Kalashnikovs, bazookas, hand grenades, hand-made explosives and many bullets.

The bus was attacked by a remote-controlled explosive placed on the road and detonated as the bus passed. It was carrying officers coming from duty at Şerafettin Elçi Airport in Şırnak.

Dozens of civilians and security officials were wounded over the weekend in continuous PKK attacks in southeastern provinces. Four police officers and a 13-year-old boy were killed in separate bombings by the terrorist organization.

Twenty-four people, including 10 police officers were injured in a PKK bomb attack on a police bus in the southeastern province of Mardin late on Friday. PKK terrorists planted a bomb on an overpass and detonated it when a bus carrying police officers passed beneath. The injured officers and civilians were taken to Kızıltepe and Mardin State hospitals.

Two police officers were killed in the early hours of Saturday after PKK militants opened fire on them outside a hospital in the southern city of Şanlıurfa. The men were among a group of officers shot at as they left the emergency department of Balıklıgöl Public Hospital on Friday night. They later died of their wounds at the hospital.