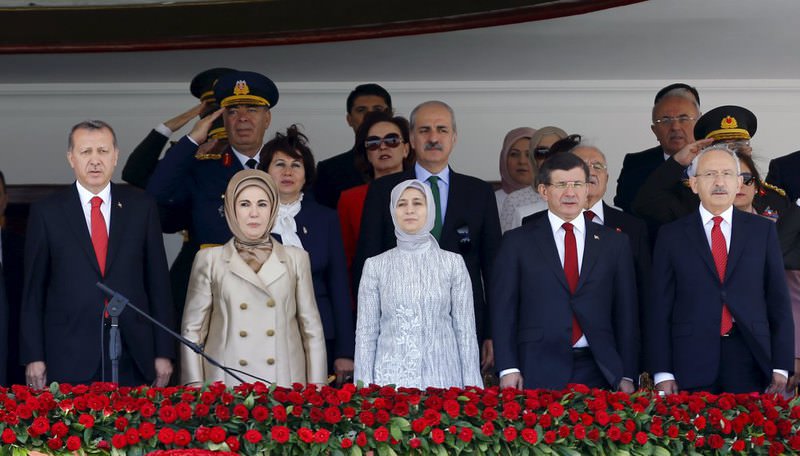 As Turkey readies for the Nov. 1 snap elections, both the president and prime minister said the officials will take necessary measures to avoid fraud and ensure the safety of voters. There were many reports of threats and clashes at the southeast Turkey during the June 7 general elections

President Recep Tayyip Erdoğan said on Sunday the government would ensure a high level of election security for the Nov. 1 early general elections. "I believe our government, together with the armed forces and the Interior Ministry, will overcome [the election process] with minimum damage by taking all measures," Erdoğan told members of the press at a Victory Day reception, marking its 93rd anniversary, in the Presidential Palace in Ankara.

Early elections in Turkey will be held nearly five months after no party won an overall majority in the June 7 elections, leading to a hung Parliament. The ensuing coalition negations ended without a government. The announcement for a new round of polling came after Erdoğan called snap elections last Monday.

Touching on pro-Kurdish Peoples' Democratic Party's (HDP) recent calls on the PKK to drop arms, Erdoğan said he did not think the HDP was sincere. "You know that these [calls] were made before the June 7 [elections] as well," he said, and added that the perpetrators behind a recent rise in terrorist attacks "will pay the price."

Prime Minister Ahmet Davutoğlu, speaking at the same reception, reiterated Ankara's determination in fighting terrorism in the country. "Nobody should expect Turkey to stop this operation until peace and order permeate every square centimeter of Turkey," he said. Davutoğlu said security measures and policies had nothing to do with trying to impact election results. "Turkey's security is more important than everything," he added.

Operations against the PKK, listed as a terrorist group by Turkey, the EU and U.S., came after it renewed attacks on Turkish security forces following the July 20 Suruç suicide bombing. More than 60 members of the security forces have been killed in the violence, while Ankara says land and air operations in Turkey and northern Iraq have killed over 900 militants.

Davutoğlu also said his government's main principles for sustainability were clear, saying: "Those who want peace shall surrender their weapons."

In a recent article in the Washington Post, Davutoğlu wrote: "All terrorist organizations targeting Turkey must know that their acts will not go unpunished and we will respond to their acts with full resolve, as we have every right under international law to do so."

He outlined Ankara's stance against terrorism, particularly against the Islamic State of Iraq and al-Sham (ISIS) and the PKK. He said the reconciliation process with the PKK could not be resolved until PKK militants laid down their arms, ended their violent attacks and removed their armed elements from Turkey.

"PKK terrorism must stop, and it should take its armed elements out of Turkey. As our history teaches [us], we will always look for ways to peacefully resolve potential conflicts. But when we are threatened, we will act unreservedly, with every means at our disposal, until the enemy is defeated," he added.
RELATED TOPICS