Erdoğan: Those who use Gülenists to fight Turkey are destined to lose 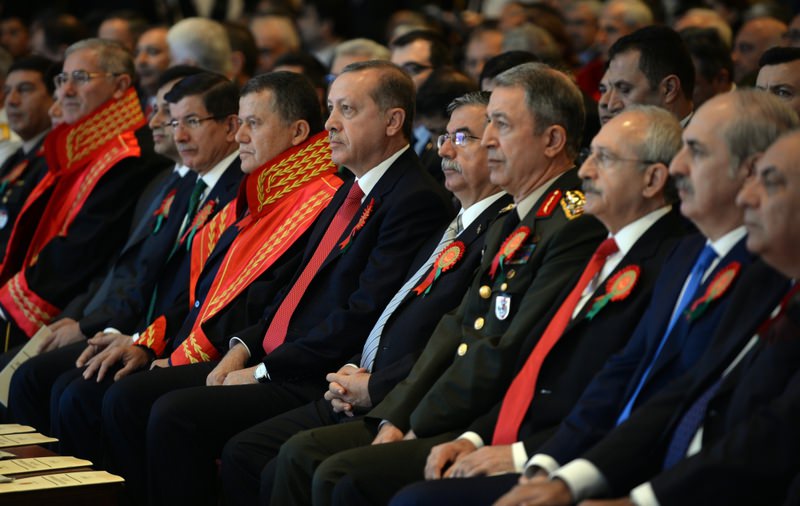 Those who target Turkey's vision with the terrorist organization ‘pawns' and Gülenist agents in the judiciary will fail in their fight, President Erdoğan said at ceremony marking the start of the new court year

President Recep Tayyip Erdoğan, speaking yesterday at a ceremony for the start of the new judicial year, said those who target Turkey's vision with terrorist organization "pawns" and Gülenist agents in the judiciary will fail in their fight. Commenting on the Gülen Movement's operatives in the judiciary, Erdoğan said: "Those who tried to control the judiciary are the ones who harmed it." Supreme Court of Appeals Chairman İsmail Rüştü Cirit said that jailing or investigating members of the judiciary is nothing to be proud of, but there can be no excuses for sacrificing the judiciary for the ambitions of movements.

Gülenist former Prosecutors Zekeriya Öz and Celal Kara fled to Germany in August. The two former prosecutors had arrest warrants issued for them concerning their involvement in the Dec. 17 and Dec. 25 operations, which has been said to be an apparent attempt to overthrow the government under the guise of an anti-graft probe. The two are allegedly wearing sunglasses to hide their identities.

Öz and Kara first fled to Armenia through Georgia and then it was reported that they continued on to Germany. Previously, Erdoğan had given a strong message to German officials concerning the Gülenist former prosecutors' escape and demanded their extradition. "The fugitive former prosecutors have fled the country, first to Georgia, then to Armenia and now to Germany. In my opinion, a 'red notice' will be issued soon for the two fugitives. We will closely follow Germany's attitude on the matter. Should Germany refuse to extradite the former prosecutors, then it will never get any criminals back from Turkey again, I will never allow it. Turkey is not a banana republic," he said.

Even though Turkey has requested the return of more than 600 suspected terrorists who have been arrested in various EU countries, their extraditions have not occurred. Germany alone has rejected more than 300 requests from Ankara for the return of suspected terrorists who have actively participated in terrorist activities linked with the PKK and the Revolutionary People's Liberation Party-Front (DHKP-C), which are both on the EU list of terrorist organizations.

In December 2014, three prosecutors were suspended in an investigation into their alleged role in the anti-graft probe against several high-profile figures, including the sons of three then-government ministers and leading Turkish businessmen. The government had denounced the probe as a "dirty plot" constructed by the U.S.-based imam Fethullah Gülen's movement and its alleged "parallel structure." The three were dismissed in May 2015 in accordance with Article 69 of the Judges and Prosecutors' Law No. 2802, which states that judges and prosecutors will be dismissed from duty if their acts damage the honor of their profession and of the reputation of their public post.

The "parallel structure" refers to a purported group of bureaucrats and senior officials embedded in the country's institutions, including the judiciary and police, who are allegedly trying to undermine the government.

Öz, who was suspended from duty at the Bolu Public Prosecutor's Office, had a lawsuit filed against him for insulting and intimidating Erdoğan while he was prime minister on Twitter. He posted the tweets in question after the operations that targeted high-level state officials took place. Öz denied the charges that he insulted and threatened Erdoğan in an eight-page statement to the court. Öz wrote on his Twitter account: "No one should desire dictatorship after the last century. His end will be like Saddam and Gadhafi. No matter who adopts lawlessness, they pay the price," allegedly alluding to Erdoğan. Öz posted another tweet soon after, saying that everyone knows the end of those who attempt to rule a state with tyranny. Öz, in response to the charges against him, said his tweets did not carry any statement that constituted a crime and would share similar tweets "again and again" if a lawsuit were filed against him.
RELATED TOPICS