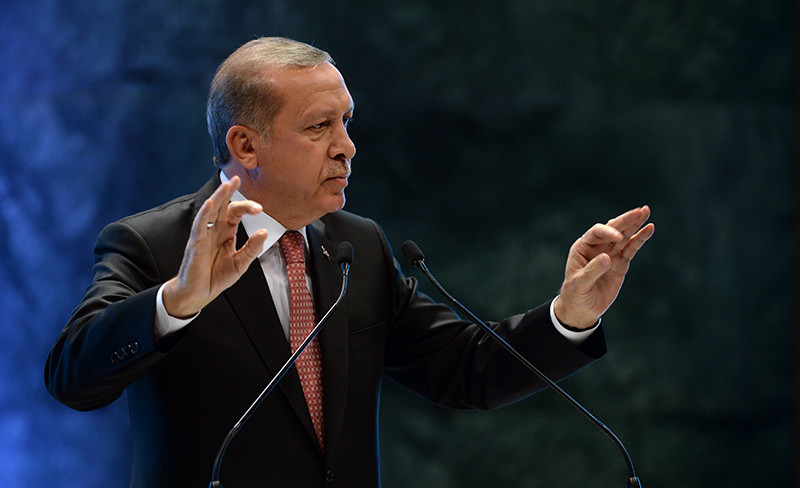 President Erdoğan lashed out at EU states for turning the Mediterranean into a cemetery for migrants, accusing Europe of turning its back to the criteria of human rights and freedoms it set

President Recep Tayyip Erdoğan on Thursday harshly criticized global powers for failing to respond to the ongoing refugee crisis in Europe, where thousands of refugees have drowned while trying to reach Europe while countries hesitate to accept more refugees.

Speaking at the B20 Summit in Ankara, the Turkish President said that the United Nations Security Council (P5) has turned into an institution that fails to respond to critical issues. "The global security system does not function properly" Erdoğan said, and added that the global security system which protects the oppressors rather than the oppressed is no longer sustainable. He harshly criticized the P5 for failing to address any issues that do not directly concern them.

Erdoğan highlighted that it is about time for global powers to recognize that the world no longer has a single power center and is now multi-centered. He said that the western countries which determined the criteria for freedom following World War II have now 'unfortunately' turned their backs to these values.

"Will the humanity not be held accountable for the three-year old Syrian boy?" Erdoğan said, referring to the tragic death of Syrian toddler Aylan Kurdi, whose body washed up on a Turkish shore on Wednesday, in a failed attempt to sail to the Greek island of Kos.

The Turkish President called on the developed countries to be more sensible towards the ongoing crisis, while he called on media outlets throughout the world to also be more sensitive and objective when covering these issues.

Erdoğan also touched upon the issue of terrorism and said that terrorism poses the biggest threat to the economy as it has become a global problem.

"I would like to note that the Western countries do not pay the necessary attention regarding the issue of terrorism" he said, and added that the G20 should not only address economic issues but must also contribute to global peace and stability.

The president displayed a firm stance against terrorism and said that Turkey will continue to fight terrorism even if it is left isolated.