Parliament to discuss motion to extend military mandate in Syria 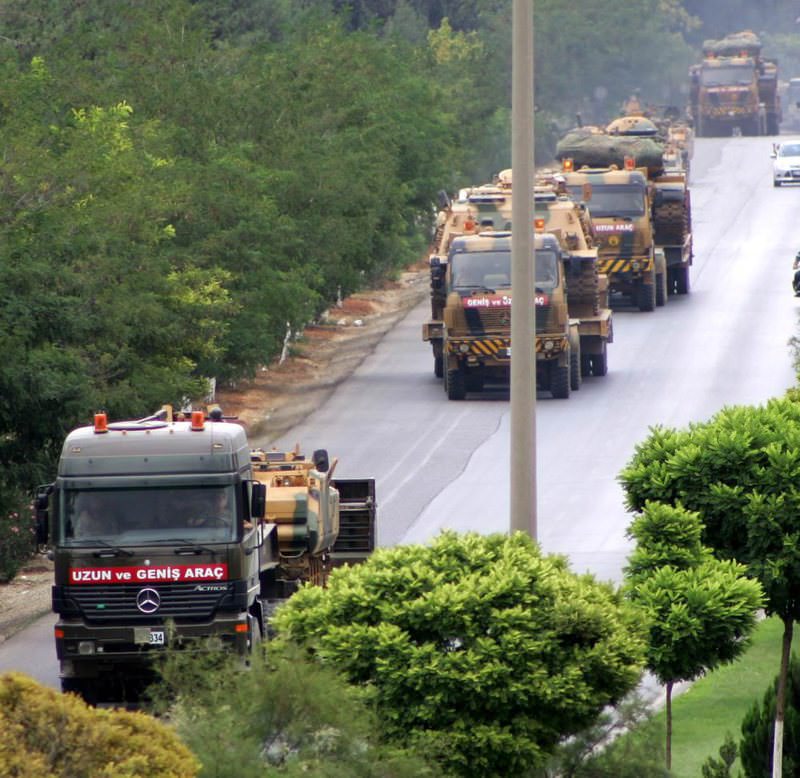 Parliament is set to convene today to discuss a motion to extend the mandate for military operations in Iraq and Syria. The motion is to introduce a one-year extension to the current mandate that is set to expire on Oct. 2

Parliament will convene on Thursday to discuss a motion to extend the mandate for military operations in Iraq and Syria. The motion to extend the current mandate, which is set to expire on Oct. 2, was submitted by the former cabinet on Aug. 21, citing "increased risks and threats against Turkey's national security along the southern land borders." Parliament voted on Oct. 2, 2014, to authorize military action in Syria and Iraq to fight any group threatening the country, with the measure to be in effect for one year. "Armed [PKK] terrorist elements continue their presence in northern Iraq. There is also a significant increase in the number of other terrorist elements in Syria and Iraq, as well as the threats they pose," the motion said. Turkey will take all kinds of necessary measures against terrorist threats and security risks within the framework of international law, it added. Officials from the second and third largest groups in Parliament, Republican People's Party (CHP) and the Nationalist Movement Party (MHP), announced they will vote for the mandate in Parliament.

The pro-Kurdish Peoples' Democratic Party (HDP), whose Co-Chair Figen Yüksekdağ said her party "leans on" the Democratic Union Party (PYD) – the Syrian wing of the PKK – and stated that its parliamentarians will not support the mandate. According to the mandate, the army will respond to any threats raised by the PKK militia in Syria.

The current mandate allows military incursions into Syria and Iraq against a threat to Turkey and allows foreign forces to use Turkish territory for possible operations against the same threats, including ISIS and the PKK, which is listed as a terrorist organization by the U.S., Turkey and the EU.

Parliament has been on its summer recess since July 14 - expected to end on Oct. 1. Two days ago, deputies from the Justice and Development Party (AK Party), which have the necessary majority needed to call for such a session, called for Thursday's extraordinary session.

The move to extend the mandate followed President Recep Tayyip Erdoğan's call for snap elections, which will be held Nov. 1, after the failure of coalition talks between the country's political parties.

An interim council of ministers was established and announced on Friday by Prime Minister Ahmet Davutoğlu after President Erdoğan told him to form a caretaker government to steer Turkey to a rerun of June's general election.

The mandate allowed the Turkish army in late February to make for the first time a land incursion deep into Syria to re-locate a historic Ottoman tomb.

The terms of the mandate also permits U.S. air forces to use Turkey's İncirlik Air Base to make lethal strikes against ISIS extremists in Syria.

Turkey is waging a dual offensive against ISIS militants and the PKK in Iraq and Syria after a suicide bomb attack in a town on the Syrian border by suspected ISIS militants killed 33 pro-Kurdish activists last month.

A Turkish soldier in southern Kilis province was killed by gunfire that came from ISIS-held territory in Syria. Another Turkish soldier was reported missing after the skirmish.The attack targeted a border post located in Kilis' Yavuzlu village and injured two Turkish soldiers. One heavily wounded soldier later died at Kilis State Hospital.

The Turkish Armed Forces released a statement saying Turkish tanks started to shell ISIS targets in Syria after the attack, and officials have launched an operation to locate the missing Turkish soldier.

Kilis Governor Süleyman Tapsız made a statement outside of the Kilis hospital and said that a group of smugglers trying to cross from Syria into Turkey opened fire on border security forces, resulting in the death of one soldier.

Turkey recently began launching airstrikes against ISIS in northern Iraq and allowing U.S. warplanes to use bases in southeastern Turkey to strike against the terrorist group. Foreign Ministry spokesperson Tanju Bilgiç stressed that Turkey will continue to work with the U.S. to combat ISIS. A ministry official claimed that 20,000 people have been banned from crossing the Syrian border in an effort to prevent foreign fighters from entering the country. In late June, the official number for those deported by Turkish authorities was 1,350. The Foreign Ministry announced on Wednesday that that number has now reached 2,100. In addition, officials stated that through risk analysis systems designed to spot foreign fighters at airports, more than 1,400 people have been banned from Turkey.
Last Update: Sep 03, 2015 3:07 pm
RELATED TOPICS