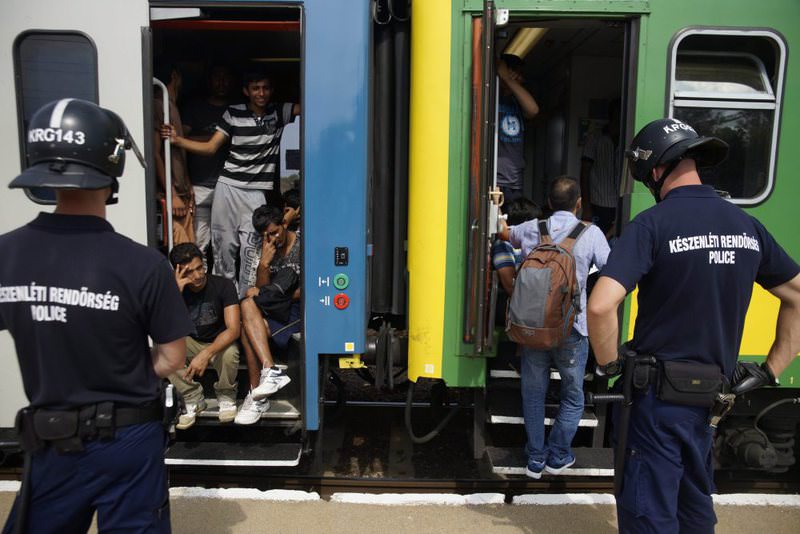 Germany, in a bid to relieve the refugee crisis that recently hit Europe, decided to admit 800,000 refugees in 2015 while other EU countries resume their indifference to the matter despite an ongoing tragedy in which many refugees are killed on dangerous journeys to Europe

After a long period of apathy toward the refugee crisis that has already engulfed some Middle Eastern countries, such as Turkey, Lebanon and Jordan due to the ongoing Syrian war, Germany has recently taken a leading role to ease the asylum issue in Europe by calling for an EU-wide solution after the problem finally extended to the continent and reached a critical level. Brushing off criticism over the lack of generosity in providing a safe haven for refugees who recently began applying for asylum in European countries, Germany let go of strict EU rules and decided to take in a large number of refugees, estimated to be around 800,000 this year.

German Chancellor Angela Merkel branded the immigration crisis as a "bigger challenge" for Europe than the Greek euro crisis in mid-August and called on EU countries to act together to overcome the matter. Germany recently dropped an EU law, the Dublin Regulation, which requires refugees to stay in the first European country that they arrive in until their asylum claims are processed and will now permit Syrian refugees to stay and apply for asylum instead of sending them back. The belated decision aims to alleviate the congestion in come coastal European countries, such as Italy and Greece, which are the first countries the refugees reach after perilous boat journeys through the Mediterranean.

Merkel's billing the asylum issue as more alarming than the Greek debt crisis appears to be a well-founded one, as the country is already contending with a slew of challenges due to the whopping number of immigrants it currently hosts, and some 800,000 more are expected to apply for asylum in the country this year. The situation is no less troublesome for other European countries, but unlike Germany, for now they pursue a "keep-them-out" policy to avert the downsides -- both financial and cultural -- of hosting immigrants. However, Europe's desire to remain a homogeneous community and reluctance to shelter indigent refugees who flee war zones has triggered worldwide reactions, especially after the rise in the number of tragic refugee deaths during their thorny journeys to Europe. Just recently, a truck full of decomposing corpses, including children, was found in Austria, revealing the gravity of the situation. On Wednesday, heartbreaking images of a drowned Syrian toddler who washed ashore in the Turkish resort town Bodrum, sparked an outcry. Concerned people across the world called on European authorities to deal with the matter with concrete steps "in the name of humanity."

Germany purportedly has finally come to an understanding that keeping refugees out is no longer a viable solution to the crisis and that the illegal routes the refugees follow to arrive in Europe will continue to cost lives. But to achieve results, it needs to awaken the EU, which keeps dragging its feet to adopt common measures to handle the situation.

Germany's decision to take some responsibility with regard to the crisis deserves credit, but whatever measures are taken could have been more effective if it had not been belated, experts believe, especially when a similar crisis has a precedent in Turkey.

"Our government and everybody who reads newspapers knew what was going on in the rest of the world. But for many years we were following the idea that the refugees would not come to Europe and Germany. Now we face real life," said German academic Dr. Martin Jander.

Turkey has been there and done that, coping with the consequences of the war on its doorstep, not least the protracted refugee situation. As result of its open-door policy, it is currently hosting more than 2 million refugees, and the country's ability to take on more refugees is waning. Turkish officials since the onset of the civil war in Syria have been calling on western countries to share its burden or at least extend financial assistance for the expenses needed to carve out a fresh life for them in its territory. They have also been pushing the U.S-led coalition against the Islamic State of Iraq and al-Sham (ISIS) to establish a safe zone inside Syria to house the refugees and prevent some of the difficulties it faces due to the continuing refugee influx.

The demand was turned down by the coalition until a deal was made between the U.S and Turkey and the U.S finally relented to form a safe zone in Syria in exchange for Turkey's permission to use its airbase in İncirlik to launch airstrikes against ISIS.

Political analysts believe if the idea of a safe zone had been supported sooner, the crisis would not be as big as it is now, not only for Turkey but also for Europe.

The German government knows well enough that the decision will come at a price for the country not solely based on accommodation issues but culturally. There are concerns over possible cultural conflict and how to integrate the predominantly Muslim refugees in a society infamous for its xenophobic sentiments.

A recent suspected arson attack on a planned refugee shelter in the eastern town of Heidenau has foreshadowed possible repercussions for the expected influx. Following the attack, high-level officials promised to take strict action against the perpetrators of such attacks in an apparent bid to reassure migrants arriving in the country that far-right extremists "do not represent Germany."

"It is not a question of whether Germany has the capacity to manage the new wave of refugees. The only question is if German society wants to do it," Jander said, drawing attention to the reforms Germany has to go through to manage the situation. He continued: "The most important reform Germany is facing is a reform of its culture. For centuries we followed the idea that a country should have a homogenized culture. Real secular democratic countries are diverse. Many Germans struggle with that idea. Now is the time and the chance to move forward."

The issue does not only concern Germany; other European countries also do not want to blend with a community that is from a different culture. Hungarian Prime Minister Viktor Orban has said he did not want the consequences that he sees of big Muslim communities in other countries in what have been considered offensive comments. Hungary, which is a gateway to the EU from Eastern Europe, erected a 177-kilometer-long fence to stop refugees. Britain holds to its firm regulations regarding the asylum issue apparently to avoid the challenges of hosting the refugees. The Guardian newspaper reported in late May that Britain hosts only 187 out of roughly 12 million displaced Syrians. There are currently an estimated 200,000 Syrians taking shelter in Europe.

President Recep Tayyip Erdoğan on Friday criticized the "small number of refugees" western countries host and said Turkey has been far more generous than western communities in providing them shelter although they are in better condition.

Time will tell whether Europe will be able to adopt a common strategy, cope with the migrant crisis and decide to be more generous in taking in refugees, but a crucial question still remains as to why it has taken them so long to address the matter.
RELATED TOPICS