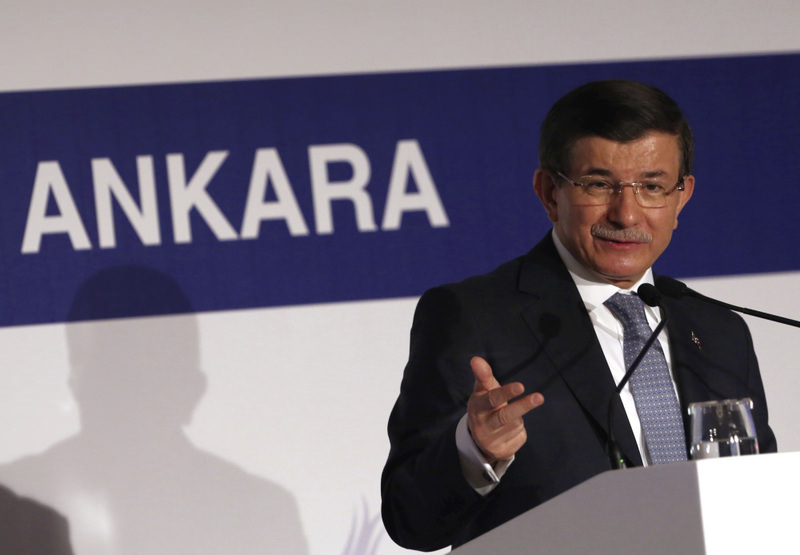 In a speech at a W20 event in Ankara on Sunday, PM Davutoğlu accused EU countries and the U.N. of not showing enough sensitivity to the increasing refugee crisis whereas Turkey has 2 million Syrians

Interim prime minister and Justice and Development Party (AK Party) chairman, Ahmet Davutoğlu, speaking at a W20 event in Ankara on Sunday, criticized European countries and the U.N. for their stance on the increasing refugee burden and said the five permanent members of the U.N. decide what is going to happen while Syria's neighboring countries pay the price for their decision.

Holding the U.N. Security Council (UNSC) accountable for not making the right decisions, Davutoğlu said 2 million Syrian refugees are in Turkey, Jordan and Lebanon, not the permanent members of the UNSC.

"I respect those five permanent members, but they never pay the price for what is happening in Syria and Iraq. They decide on what is going to happen and the responsibility of establishing refugee camps falls to the neighboring countries," Davutoğlu said, calling on EU countries and the U.N. to take action to change the fate of Syrian refugees.

Davutoğlu said Turkey places emphasis on "inclusiveness" during the country's G20 presidency as inclusiveness will be the only solution of today's problems around the world, according to him.

"There is a need for an inclusive solution process [for the Syrian refugee crisis], peace endeavors by the U.N. should go within an inclusive system," he said.

Speaking of the image of 3-year-old refugee Aylan Kurdi whose lifeless body was photographed lying on a Turkish beach, Davutoğlu said refugees are considered criminals in many parts of the EU since the UNSC lagged behind to make responsible decisions over the refugee issue.

Touching on female refugees as part of Sunday's W20 event theme, Davutoğlu said the real victims of the Syrian civil war are women as they have to look after their children who are left without fathers.

Davutoğlu asked: "Can you imagine what Aylan's mother experienced? I believe she did everything to save his life. Who is responsible for this?"

"If women are smiling, you can be sure that their country is happy. … Throughout human history women pay the price for the decisions made by men, women know what war actually means. Women shoulder the burden on behalf of humanity," he said, adding that he does not forget the faces of four women he came across during his tenure as one of them is a Syrian refugee mother who lost one of her legs.

During a speech at the B20 Summit in Ankara on Friday, Davutoğlu called on the international community to act immediately to find a solution to the crisis saying: "The U.N. should make a decision on how they will protect Syrian refugees."

"I am proud to be the prime minister of a country that has more than 2 million refugees," Davutoğlu said, and added: "Turkey will continue to open its doors to refugees."

Turkey has borne the brunt of the humanitarian fallout from the war in neighboring Syria, taking in around 2 million refugees. The picture of 3-year-old Aylan Kurdi's body on the shore became the focus of many international media outlets shortly after the incident, some social media users have also shared images of Aylan and his brother Galip when they were living a peaceful life in Syria.
Last Update: Sep 07, 2015 1:39 am
RELATED TOPICS