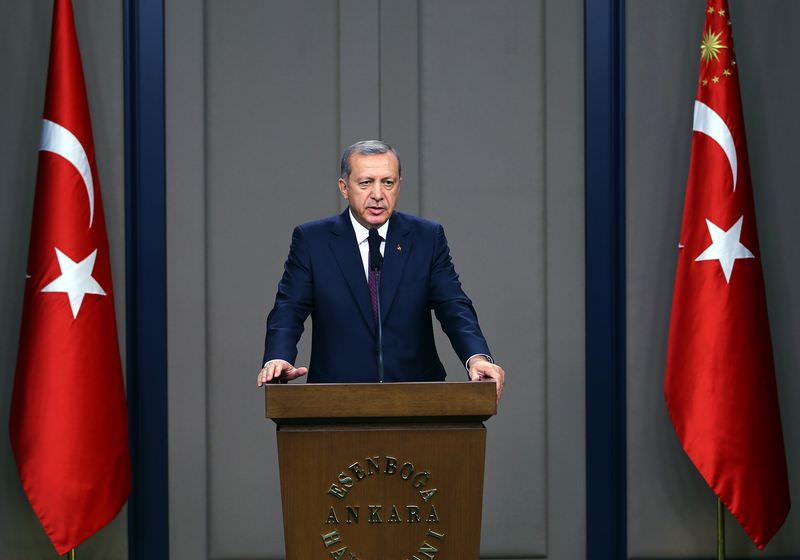 by Daily Sabah Sep 07, 2015 12:00 am
President Recep Tayyip Erdoğan on Monday strongly condemned the terrorist attack carried out by the PKK in Hakkari's Dağlıca district, which resulted in the death of 16 troops and said that such attacks will never achieve their goals.

According to a press statement released by the Presidency of the Republic of Turkey, Erdoğan said that terrorist attacks targeting the unity, fraternity, brotherhood and future of the nation will never succeed.

"I believe that the Turkish nation will maintain a united and determined stance against attacks that aim to damage peace, security and stability of the country" the Turkish President said, and offered condolences to the families of the deceased soldiers, as well as the Turkish nation as a whole.

In a live interview held on A Haber Channel on Sunday, the president underscored that Turkey would take a more determined and firmer stance against the PKK.

"We will continue this struggle till the end" President Erdoğan said, emphasizing that Turkey will continue its operations against the PKK terrorists, and noted that 2,000 terrorists have been killed so far.

PKK terrorists targeted Turkish soldiers in a landmine attack late Sunday in the town of Dağlıca of Turkey's eastern Hakkari province, wounding and killing several soldiers, according to security sources. An operation backed by helicopters was immediately launched after the attack, in which 13 PKK targets were heavily bombed by F-16 and F-4 aircrafts in southeastern Turkey, security sources said.

The incident took place on a road in the town of Dağlıca Sunday evening, as two armed vehicles belonging to Turkish soldiers were crossing.

16 soldiers were killed in the attack according to security sources, although Turkish security officials have not released an official statement yet.