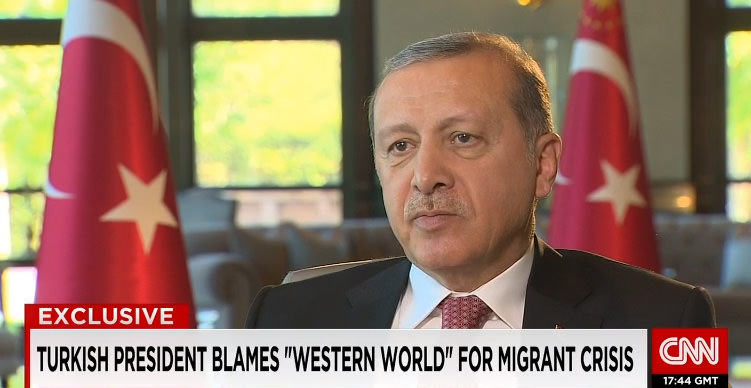 In an interview that President Erdoğan gave to CNN International, he criticized the Western World’s indifference towards the atrocities caused by the PKK terrorist organization. Erdoğan also emphasized Turkey’s determination to fight against every kind of terror, adding that the PKK is the primary threat to Turkey’s national security

Turkish President Recep Tayyip Erdoğan gave an interview to CNN International on Sunday in which he emphasized the West's indifference toward PKK terror.

"The European Union, which recognizes the PKK as a terrorist organization, has unfortunately always winked at it. European countries have even allowed PKK members to hold public demonstrations. I will put this straight: EU members still allow PKK activities in their countries," he said.

In the interview broadcast by CNN International on the Connect to the World program hosted by Becky Anderson, Erdoğan made evaluations concerning the recent developments in Turkey and the region.

Touching on the refugee crisis, Erdoğan put the blame on the West, saying, "Frankly, I find the Western world as a whole responsible for the matter."

Answering the question about his remarks in which he blamed the West for "making the Mediterranean a cemetery for refugees," he said that it was "a reality."

"I said it knowingly; I said it believingly because it is the solid truth. Mediterranean countries say 'We don't want any refugees in our country whatever the consequences will be.' But we never had this mentality, whenever there were oppressed people near our borders, we always let them in and hosted them in our country," he added.

"There is a tyrant in Syria, but the West never looked for ways to remove him from his position. We are in touch with our allies. Some countries have responsibilities concerning the matter, especially Russia and Iran. Those are the states actively supporting the Assad regime. I will again put this out clearly, they supply the regime with arms, and they provide the regime financial support and allow the tyrannical regime to stand. They are looking for ways to eliminate opposition forces in Syria. Isn't DAESH [a local acronym for the Islamic State of Iraq and al-Sham or ISIS] in cooperation with the Assad regime? The primary supporter of ISIS is the regime and the ones supporting tyranny are responsible for this situation," he said.

Erdoğan also slammed the supporters of the Assad regime, saying that tyranny would not stand for 24 hours should all support toward the regime be withdrawn.

"Syria is now war-torn and largely devastated. Are we proud of a burnt, devastated Syria? Why don't we look for ways to eliminate tyranny in the country?" he said.

Answering a question about the U.S.-led coalition against ISIS, he said Turkey has always been against every terrorist organization including ISIS, the PKK, the Democratic Union Party (PYD) and the Revolutionary People's Liberation Party-Front (DHKP-C).

"Turkey is not just fighting against DAESH, but also against the PYD, PKK and DHKP-C," he added.

Stating that the West has always left Turkey alone in its fight against the PKK, he said European countries have always tolerated PKK activities. The president also added that Turkey is determined in the fight against ISIS.

Saying Turkey hosted 220,000 refugees from Kobani, he added that 80,000 of them returned to their homeland but the rest are still in Turkey.

"We are still hosting 140,000 Syrian refugees from Kobani in our country, in our camps," he added.

Touching on the fact that the PKK is the primary threat to Turkey's national security, Erdoğan said ISIS is an external threat.

"We consider every terrorist organization a threat to our national security. But the PKK is an internal threat and is the primary danger Turkey is facing. We have lost over 50,000 people in our fight against the PKK. Nevertheless, DAESH is an external threat that is endangering the region. DAESH is a secondary threat that Turkey faces. We will continue our efforts to fight against both terrorist organizations," he stated.