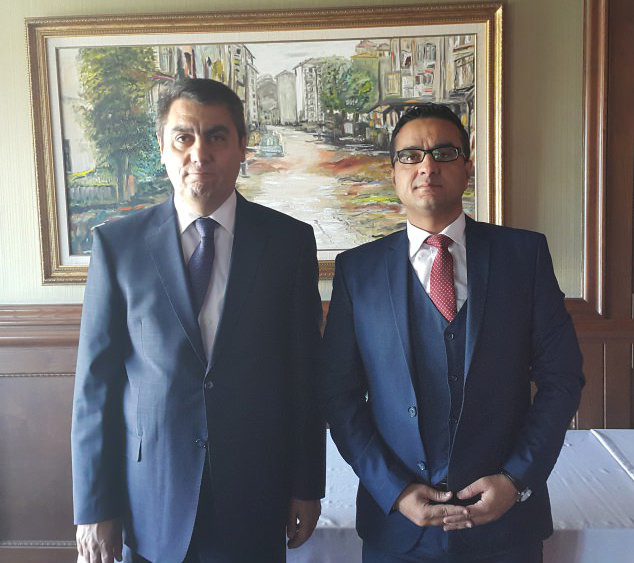 The washed up body of a Syrian child named Aylan Kurdi onto the shore of the Aegean Sea caused public indignation all around the world, once again indicating the desperation of immigrants. Daily Sabah spoke with the general director of the Migration Management Directorate, which coordinates all efforts regarding immigrants and was established in the Ministry of the Interior two years ago.

Stressing that Turkey's immigration policies prioritize humanity over security, General Director Atilla Toros stated that Turkey has transformed from a transit country into a target country over the years, regarding immigration. Toros, signifying that Turkey is continuing its fight against foreign fighters, expressed the greatest challenge was due to the inadequate and ineffective intelligence shared by source countries.

Our institution was established as a result of a law passed in April 2013; thus, as you have said, we are a fairly new institution. According to the law, the Migration Management Directorate coordinates other government institutions, manages regular and irregular immigration, provides temporary protection and protects human trafficking victims, handles the matters of the stateless and harmonization.

Could you elaborate on the concepts of regular and irregular immigration?

Regular immigration is about the status and procedures of those who legally come to Turkey for tourism, education, work and settling.

Irregular immigration is the term used for foreigners who enter the country illegally or that entered the country legally, but continue to stay even though their visas have expired.

Immigrant trafficking and human trafficking, both of which are considered as a part of irregular immigration, are usually confused with each other.

Immigrant trafficking is defined by the 79th clause of the Turkish Penal Code as "helping a foreigner to stay in or enter the country illegally or helping a Turkish citizen or a foreigner to leave the country through illegal means for material benefits."

According to the 80th clause of the Turkish Penal Code, a victim of human trafficking is "a person who is transported in or out of a country for forced labor, servitude, prostitution or for the person's organs through the abuse of control and their desperation."

The Syrian child's body that washed up onto the Aegean shore caused indignation around the world. Could you tell us about the search and rescue operations in this manner?

The deaths of Aylan Kurdi and his brother Galip Kurdi have shocked us, as is the case with the whole world. Their family wanted to take their bodies and bury them in Kobane (Ain Al Arab); thus, the Muğla Provincial Migration Management Directorate sent their bodies via airplane.

The Muğla Provincial Migration Management Directorate arranged the flight to take the bodies to Şanlıurfa, and the family was accompanied by two experts from the directorate. The family was lodged in a hotel until the flight.

A committee, including a psychologist from the directorate, flew with the family to Şanlıurfa, where they were welcomed by authorities from the Şanlıurfa Provincial Migration Management Directorate at 6:30, and the family was accompanied to the Mürşidpınar border gate. However, when we look at Europe's immigration policies, we can say that they are rigid. They are discussing methods ranging from sinking immigrant ships to a special fleet that will prevent immigrant ships.

Is the fight against foreign fighters actualized as a part of irregular immigration policies?

Foreign fighters are also a part of irregular immigration, as 19,626 people from 112 countries have been barred from entering Turkey. On the other hand, 2,122 foreign fighters from 85 countries who were either caught in Turkey or crossing the border were extradited. In this manner, I think that Turkey is doing whatever it can. We have experienced many cases in which we received information regarding foreign fighters from their source countries fairly late. Cooperation against foreign fighters will benefit everyone. We are coordinating with the security forces.

What kind of cooperation does your institution have with the EU?

There is a Technical Assistance clause in the readmission agreement with the EU. In accordance with this clause, we have requested that the EU share the burden with us. As the directorate, we have prepared a 100 million-euro project packet and presented it to the EU. In this packet, there are many subjects, ranging from voluntary repatriation to the construction of six repatriation centers. After the first packet, we are preparing the second and third ones. We will use all of our opportunities regarding burden sharing.

Burden sharing does not just have a material connotation. In my opinion, the first step in burden sharing is empathy; unfortunately, I have experienced many meetings in which none could be found.

On the other hand, as the directorate, we have our own efforts regarding the readmission agreement between Turkey and the EU as well. We are about to sign a protocol with the Housing Development Administration (TOKİ) about repatriation centers. There are certain issues in our border towns, which are also covered by the media, and we are working towards their resolution. In short, we are utilizing all means against irregular immigration.

With regard to immigration, is Turkey transforming from a transit country to a target country?

This is a correct statement. For example, when we look at individual asylum applications, we can clearly see this. In this context, a total of 95,114 people have applied for asylum. These people currently reside freely in 62 cities and have many rights, ranging from education to health in accordance with the 1951 Geneva agreement.

The secrecy of personal data is essential in asylum applications. Information regarding these will not be shared with source countries. The sharing of data would be a violation of the international refugee law.

After one has applied for asylum in our country, they also have to apply to the UN High Commissioner for Refugees. These are concurrent processes. When there is a wave of immigration, the individual processes become impossible. The Syrian refugees who sought sanctuary in our country are regarded as such. Temporary protection measures have to be taken.

What are the latest developments regarding Syrian refugees in our country? What is the state of the registration process?

On Oct. 22, 2014, the Temporary Protection Regulation was passed in the council of ministers, and refugees that came to Turkey after April 2011 were granted temporary protection. This regulation was prepared in accordance with the 91th clause of the Foreigners and International Protection Law. Details about international processes were included in these regulations. According to rights and services, the duty of each ministry was determined. This is the only temporary protection regulation that is currently being enforced. The EU has a Temporary Protection Directive, but it is not in application.

Currently, there are 1,972,065 registered Syrian refugees in Turkey. When we took over as the directorate, the number of registered refugees was around 500,000. Talking with the authorities on this matter, we have introduced many applications to encourage registration. We have stressed that they had to be registered to receive health services and education. When our security forces come across an unregistered refugee, they are obliged to take the refugee to a registration center. We believe that there only a few unregistered Syrian refugees are left.

How many of the Syrian refugees live in camps and by their own means?

Of the refugees, 259,151 reside in camps, while the rest reside all across our country. Voluntary repatriation is also held by our institution. Requests by those that want to return to Syria after their registration are again handled by us. In this context, I can state that we record all entries and exits in our database.

There are about 2,100,000 registrations of Syrian refugees. When we think about the 1,972,065 Syrian refugees who are currently in our country, we can observe that 100,000-150,000 Syrians have returned to Syria. The ones who want to return to our country again have to go through the same processes once more.

Are there any efforts to integrate refugees into society?

Harmonization has many aspects. We do not have an integration program similar to Europe. We emphasize harmonization instead of integration: reciprocal harmony between foreigner and society.

As the directorate, we have started a new project emphasizing harmonization and communication. This project is a packet program that does not foresee any obligation. We have an emergency line, named YİMER, Communication Center for Foreigners. This centers has been operating in four languages, Turkish, English, Arabic and Russian, for about two weeks now. It is open 24/7. We are planning to increase its capacity and add many more languages to the system, such as Persian and French. This line is also used by victims of human trafficking. Along with reports, we are improving the line to provide help in many subjects.

Another implementation of Law No. 6458 is the establishment of the Protection of Human Trafficking Victims Department. We will fight against human trafficking with determination. In this context, we have three shelters that are currently active.

What other measures could be taken to fight irregular immigration?

Legal entry and departure should be encouraged. In this context, the work permit is now also a residence permit. Therefore, if you already possess a work permit, the necessity to apply for residence is removed. Along with this, since April 11, 2014, there are some instructions from the Ministry of the Interior that we follow. If a person who is currently staying in our country illegally voluntarily goes to a border gate and pays the related fines, we do not impose a ban from entry.

Another important development is the system we call "e-residence," which is about acquiring and renewing residence permits. The system, which came into effect on May 18, 2015, consists of two subsystems: a central appointment system and an e-extension. A foreigner who applies for a residence permit for the first time, after filling out the form in the central appointment section and completing the required documents, uses the appointment system to pick a date and goes to a Provincial Immigration Management Directorate. The e-extension system, on the other hand, provides the possibility to extend their stay in Turkey without going to a directorate in person. The process can be completed if the person fills out the extension form, pays the fee and sends the documents via post to the directorate. We believe that making the acquisition and renewal of the residence permit easy is important in encouraging regular immigration. Fighting against irregular immigration is as important in protecting the immigrants as it is in protecting our country and our society. We try to dissuade irregular immigration, while returning captured irregular immigrants to their countries hastily, yet within the determined standards. If this is not accomplished, we will have to face many inhumane situations, such as abuse.
Last Update: Sep 07, 2015 11:04 am
RELATED TOPICS