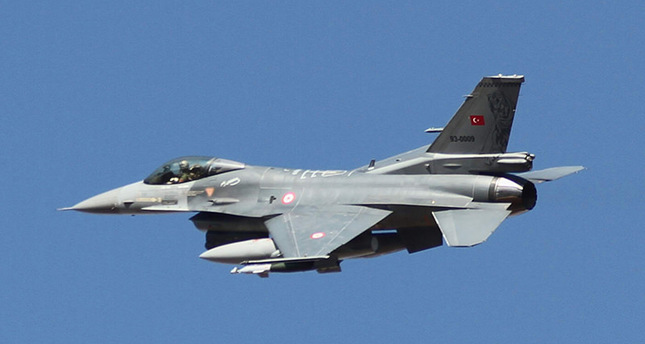 | AA Photo
by Daily Sabah Sep 08, 2015 12:00 am
Turkish military has conducted airstrikes and a ground military operation against PKK terrorists who fled to Northern Iraq following the Dağlıca terrorist attack.

Two batallions from the Turkish military and eight Gendermarie Special Operation teams have participated in the cross-border ground operation.

According to reports, 53 fighter jets participated in the airstrikes, which were carried out between 11 PM and 5 AM local time.

A total of 20 targets have reportedly been hit, and 130 bombs were dropped, neutralizing over 40 terrorists according to initial reports.

Some of the terrorists who were killed during the airstrikes have reportedly participated in the terrorist attack in Hakkari's Dağlıca district, which killed 16 Turkish soldiers on Monday.

PKK terrorists targeted Turkish soldiers in a landmine attack late Sunday in the town of Dağlıca of Turkey's eastern Hakkari province, killing 16 soldiers and wounding 6 others.

The incident took place on a road in the town of Dağlıca on Sunday evening, as two armed vehicles belonging to Turkish soldiers were crossing.