Demirtaş calls for revenge against those attacking pro-Kurdish HDP buildings 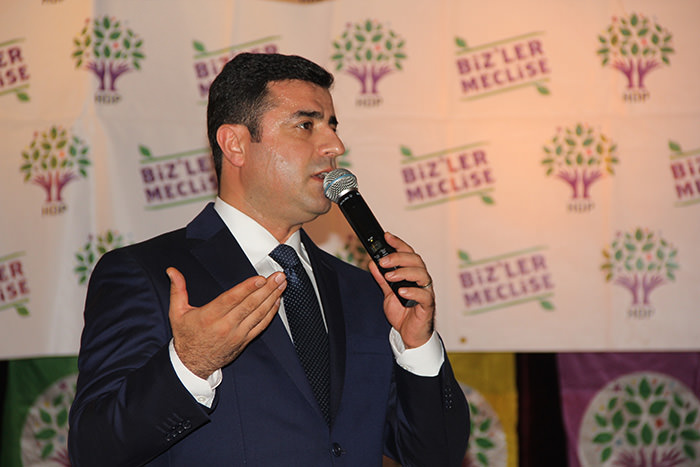 HDP Co-Chair Selahattin Demirtau015f (AA Photo)
by Yunus Paksoy Sep 09, 2015 12:00 am
The pro-Kurdish Peoples' Democratic Party (HDP) Co-Chair Selahattin Demirtaş added another controversial remark to a series of statements made by HDP deputies threatening Turkish citizens and calling on party supporters to spread violence. Demirtaş saw it fit to add fuel to the flames, provoking HDP supporters to "make them regret what they do."

In the wake of two PKK terrorist attacks in Turkey's southeast on Sunday and Tuesday that claimed the lives of 31 soldiers and police officers, a massive public outrage emerged against the terrorist organization and the HDP. The HDP's reluctance to condemn the PKK following the attacks has grown into public frustration and exasperation.

In spite of the public outrage, Demirtaş chose not to include the PKK in his remarks in the wake of the aforementioned bloody attacks. After the public outrage turned into attacks on HDP headquarters during the Nationalist Movement Party (MHP) rallies across the country late Tuesday, Demirtaş came into the picture on Wednesday sparking more controversy and conflict unlike Prime Minister Ahmet Davutoğlu and Republican People's Party (CHP) leader Kemal Kılıçdaroğlu who called for a calm environment.

Demirtaş also attempted to put the blame on the ruling Justice and Development Party (AK Party) even though the attackers hurling stones at HDP headquarters were in the rally organized by the MHP. Demirtaş said: "The government does not back you, and you will be dissipated. But if you say we will go do 20 years' time for the AK Party, do it."

Similar to Demirtaş's remarks stirring the country, the other HDP Co-Chair Figen Yüksekdağ's statement on Sunday drew heavy criticism when she argued that the HDP is ready for "elections and resistance."

Yüksekdağ has so far attempted several times to bolster the image of the PKK, which is recognized as a terrorist organization by the U.S., the EU and NATO, by calling it a "national liberation movement." She also defined the terrorist organization which has claimed the lives of more than 40,000 civilians and security officers over the past three decades, as a group that stands for "democracy and equality."

Another HDP deputy, Tuba Hezer, attended the funeral of a PKK terrorist on Aug. 28, where she shouldered the coffin. Following the images, an investigation was launched into Hezer. The incident raised questions and sparked controversy because a member of Parliament demonstrated clear support for the PKK during a terrorist's funeral.
Last Update: Sep 09, 2015 11:08 pm
RELATED TOPICS