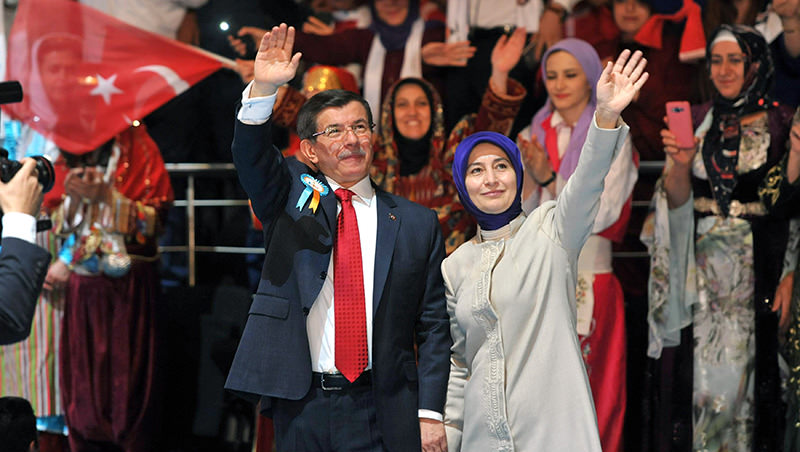 PM Ahmet Davutou011flu (L) and his wife Sare greet their supporters as they arrive to attend the 5th edition of the AK Party annual congress in Ankara, on September 12, 2015 (AFP Photo)
by Daily Sabah Sep 12, 2015 12:00 am
Turkey's Justice and Development Party (AK Party) on Saturday has re-elected Prime Minister Ahmet Davutoğlu as the party chairman and announced the new set of members for the party's Central Decision and Administrative Board (MKYK) during the fifth Ordinary General Congress in Ankara.

The congress saw the party's current leader Ahmet Davutoğlu nominated as the only candidate for party leadership. The prime minister was chosen as the party's chairman once again after receiving all of the 1,353 (out of 1,380 party delegates) valid votes.

Davutoğlu said Turkey needs a single-party government to fight "terror," as the country prepares for snap November polls and the army battles against PKK terrorists.

"A single-party government is necessary to fight terror and economic challenges," he said.

"We are heading towards November 1 elections on behalf of a permanent government, sustainable development and rights and freedom for everyone," he added.

The AK Party administration invited 11 political parties to the congress, including the Peoples' Democratic Party (HDP). About 40,000 people have reportedly attended the congress.

During the congress, it was also annouced that the party will set up a new Political Virtue Executive Board and add two deputy chair positions in party regulations renewal.

Davutoğlu succeeded Recep Tayyip Erdoğan as the party leader, after Erdoğan was elected president in the August 10 presidential election.