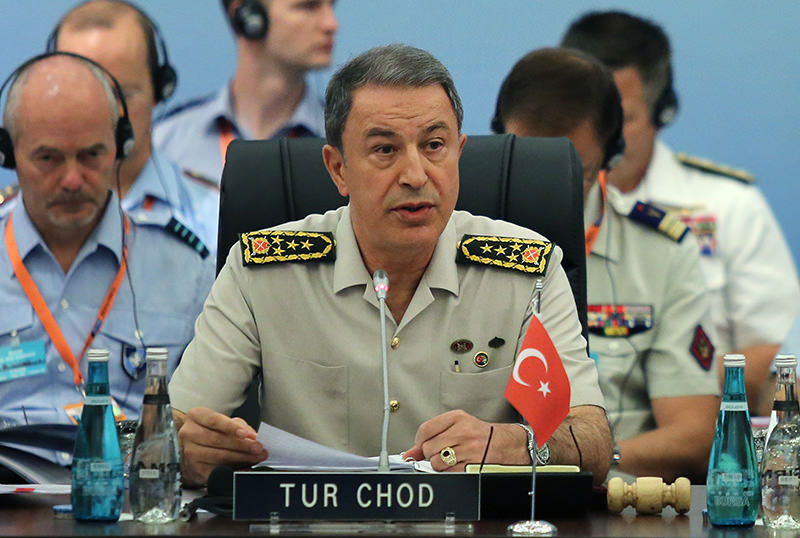 Turkey's Chief of General Staff Hulusi Akar (AA Photo)
by Daily Sabah Sep 12, 2015 12:00 am
Turkey's Chief of General Staff General Hulusi Akar attended the NATO Military Committee Conference in Istanbul on Saturday, where he said the PKK has been attempting to gain legitimacy in the eyes of the international community by giving the ongoing conflict in Syria and Iraq as a pretext.

"The PKK terrorist organization poses a threat to regional security. The PKK has benefited from the current situation in Syria and Iraq and tries to gain legitimacy in the eyes of the international community. However, during such attempts, the PKK continues to take the lives of innocent people in its brutal attacks without discriminating between men, women, the elderly and children," Akar said.

Turkish security forces are conducting counterterror operations around the southeastern Cizre district to counter PKK attacks. More than 20 civilians have been killed by the PKK since the group started its attacks in the aftermath of the July 20 suicide bombing in Suruç that killed 34 people.

Akar also spoke about the Islamic State of Iraq and al-Sham (ISIS), describing the terrorist organization as "the most barbaric terrorist group [the world] has ever seen."

"[The Islamic State of Iraq and al-Sham] ISIS's activities are taking place at the Turkish border and are seriously threatening NATO security," he said.

He said Turkey is determined to continue its fight against ISIS with the international coalition.

The U.S.-coalition has led an anti-ISIS campaign in the region since last August.

ISIS can no longer operate freely in roughly 25 percent to 30 percent of populated areas of the Iraqi territory where it once could, helped in part by nearly 4,100 coalition airstrikes in the country since last summer, according to the Pentagon.

Speaking at the same event, chairman of the NATO Military Committee, Gen. Petr Pavel, said Turkey's presence in Afghanistan, Kosovo and NATO's offshore operations show how the country has devoted itself to the principle of alliance that holds the two countries together.

The Military Committee meeting is held biannually at NATO headquarters in Brussels where NATO country chiefs of defense discuss NATO operations and missions and provide the alliance with consensus-based military advice. The committee also meets once a year in a member country. A new director general of the International Military Staff will be elected at the end of the conference.