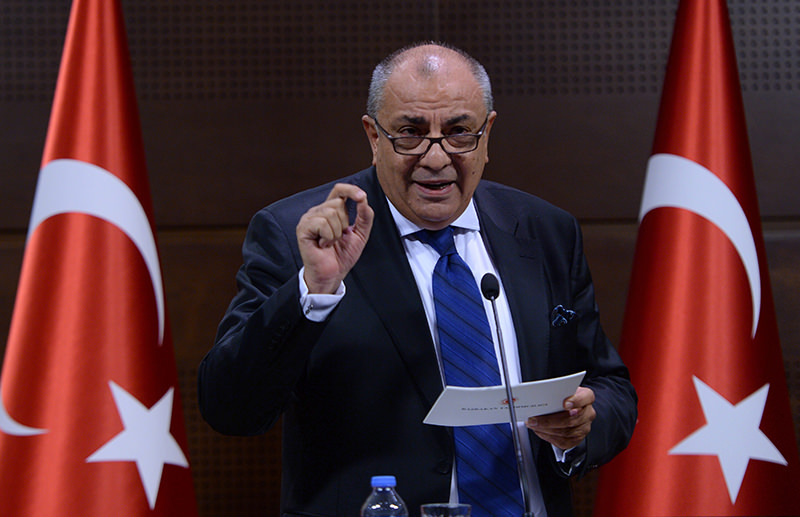 | AA Photo
by Daily Sabah Sep 14, 2015 12:00 am
Deputy Prime Minister Tuğrul Türkeş, who was expelled from the Nationalist Movement Party (MHP) for accepting to take part in the caretaker cabinet, has sent a protest letter to his party, and requested that his expulsion be declared null and void.

"I accepted the offer to take part in the caretaker cabinet, I did not join an unlawful criminal organization" Türkeş has reportedly said in the letter, highlighting that he is fulfilling his political duties and constitutional duties.

He stated that it is against the party's raison d'être to run away from undertaking responsibilities during such a critical period in the country. "Parties are a means to serve the nation and the state, and today if some want to take this tool away from me, I will never give up serving the nation and the state" Türkeş said, and added that accepting a constitutional duty does not violate party bylaws.

Türkeş stated that he did not receive an official notification regarding the party's decision to expel him and that he 'learned about the decision through media outlets.'

Referring to his expulsion as 'a severe and irrecoverable punishment,' Türkeş asked his party to annul the disciplinary committee's decision, as he claimed it was against the party's expulsion law and the party bylaws.

He also stated that he has received threats from groups within the party, and that the party is obliged to prevent such attacks, which would interfere with a deputy's duties.

Türkeş is the son of Alparslan Türkeş, the party's founder and honorary leader.

Türkeş had previously said that he would use his legal rights against such a decision, and called on Bahçeli to convene an extraordinary party congress on October 4 to ask the delegates whether he should be expelled or not.