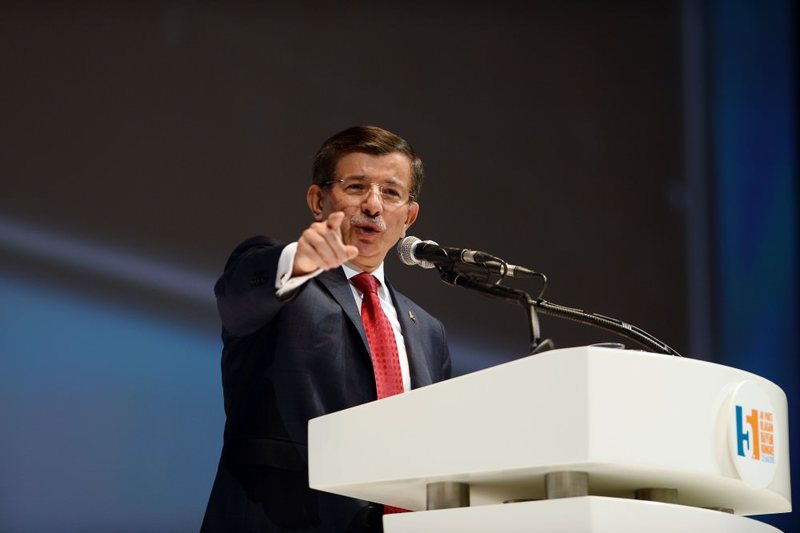 by Merve Aydoğan Sep 14, 2015 12:00 am
The Justice and Development Party's (AK Party) fifth Ordinary General Congress in Ankara on Saturday saw incumbent Prime Minister Ahmet Davutoğlu re-elected unopposed as the party chairman. The elections for the party's new Central Decision and Administrative Board (MKYK) resulted in experienced politicians and new blood joining forces with an eye on the coming Nov. 1 parliamentary elections.

Davutoğlu, in his speech, emphasized the party's will to continue making reforms and added that political and ethical commissions will be established. He urged unity and said the country belonged to Turks, Kurds, Alevis and everyone else living in Turkey.

In his speech, Davutoğlu said that the AK Party will not concede victory to the terrorists or any other group seeking to disrupt order in the country. He further stated, "A single-party government is necessary to fight terror and economic challenges." Pointing out that Turkey will never return to the '90s type of dysfunctional government, Davutoğlu said, "We are heading towards the Nov. 1 elections on behalf of a permanent government, sustainable development and rights and freedom for everyone."

In addition, the AK Party announced that a new Political Virtue Executive Board is to be established, as two-deputy chair positions will be added in party regulations renewal. The AK Party further announced the suspension of a long-standing principle that prevented party members from holding a post for more than three terms. The critical congress continued with the announcement of the new MKYK, with many new figures, such as Ravza Kavakçı Kan, a Feb. 28 postmodern coup victim and the sister of Merve Kavakçı, who was forcefully removed from Parliament in 1999 during her inauguration for wearing a headscarf; former Parliament Speaker Cemil Çiçek; and former Transportation Minister Binali Yıldırım. Yalçın Akdoğan, Efgan Ala and Nurettin Canikli are also on the new administrative board.

Following the congress, sources reported that the AK Party determined its roadmap for the Nov. 1 elections. The list of deputy candidates will be determined through the report that will also highlight the unsuccessful provincial organization during the June 7 elections. Furthermore, similar to the MKYK list, major changes to the deputy candidate list will also be made. During candidates' introductions and the manifesto meeting on Nov. 22, it has been reported that the AK Party will introduce solid economical promises and initiatives to support women and youth during the process of early elections.
RELATED TOPICS