It's a crime to promote terrorism, Presidential spokesman says 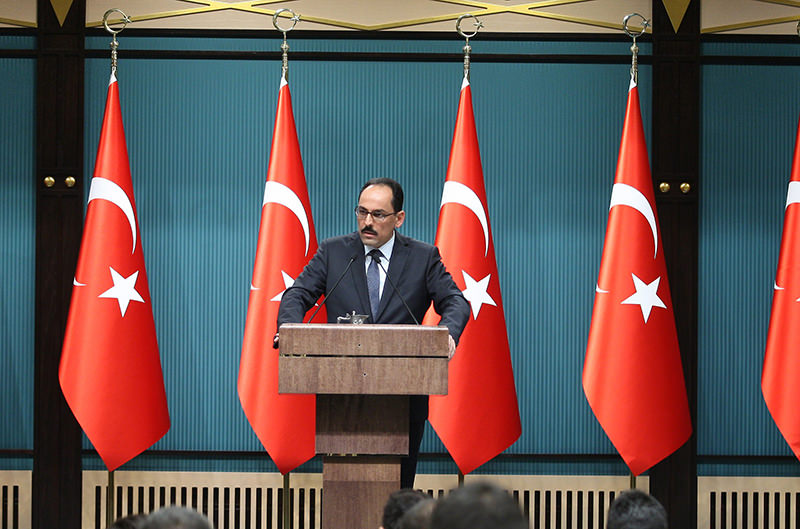 by Nurbanu Kızıl Sep 15, 2015 12:00 am
Presidential spokesman İbrahim Kalın said on Tuesday that it is a crime to promote terrorism, as he underscored the importance of the fight against terror, which poses a threat both to people's safety and the country's security.

Holding a press conference at the Presidential Palace in Ankara, Kalın criticized those who publish manipulated and false news about the recent terrorist attacks in Turkey. He stated that justifying terror is neither tolerable nor permissible anywhere in the world.

Kalın said Turkish security forces have expended great effort toward ensuring the security of every region in the country and thwarting PKK attacks against security officers, public institutions and civilians.
Kalın compared the curfew in Cizre with the one that was imposed in the U.S. city of Ferguson following protests, and highlighted that the situation in Cizre was much more serious as PKK terrorists had dug ditches and set traps for security officials.

"We saw how U.S. police took precautions to ensure security in Ferguson, even though there were no ditches or traps over there," Kalın said.

Touching on the penalties for terrorism in other countries, Kalın noted that strict measures are imposed for terror-related crimes. "As much as terror is a crime, it is also a crime to praise and romanticize terror and make it look appealing," he said, while adding that there is legislation against terrorist propaganda in many European countries.

He continued by criticizing Western and other media outlets for biased reports, and implicitly praising and supporting PKK terrorists. "Nineteen people were detained in Spain for praising terrorism," Kalın said, and added that glorifying PKK terrorists for the sake of fighting the Islamic State of Iraq and al-Sham (ISIS) was unacceptable, as both organizations are terrorists.

Kalın said the Turkish state is working hard to ensure that all citizens from the eastern to the western end of the country live in peace and are safe, and added that the state will not allow terrorists to disrupt public order.

He also praised the recent initiatives taken by nongovernmental organizations in Turkey, which have organized rallies to say "yes" to peace and "no" to terrorism.

With regards to the Syrian crisis, Kalın said it is a disgrace for humanity to stand by, as millions of civilians are victimized by the conflict in Syria.

"We accepted 2 million refugees in our country, and it is an honor for us to carry this responsibility," Kalın said. He then criticized a couple of European countries for debating whether or not to accept 20,000 refugees.

"We expect European institutions to take concrete steps to resolve this refugee crisis," the presidential spokesman said. He said there is only one country that the Syrians want to go to and that is Syria, but a Syria without war.

Kalın also condemned the recent Israeli attacks on Al-Aqsa Mosque in East Jerusalem. "We openly call on the Israeli administration to stop provocations," Kalın said. He added that President Erdoğan has spoken with the U.N. and will continue to speak with world leaders regarding the issue.

Regarding the fight against ISIS, Kalın said, "The fight against ISIS is proceeding according to plan" and added that Turkey continues to carry out airstrikes in Syria, and has prohibited the entry of about 20,000 people into Turkey, and deported over 2,000.

"Everyone has a duty to fight ISIS" Kalın told reporters, noting that it is crucial for foreign countries to inform Turkey about potential terrorists to prevent them from joining ISIS.

Turkish security forces have arrested thousands of people with suspected links to ISIS, the PKK, and leftist groups.

According to military sources, hundreds of terrorists were killed in Turkey's airstrikes against PKK's hideouts and camps in northern Iraq.

The PKK is also accused of using civilians as human shields in its camps and has attacked and killed many civilians in its latest attacks to cafes, restaurants and streets.