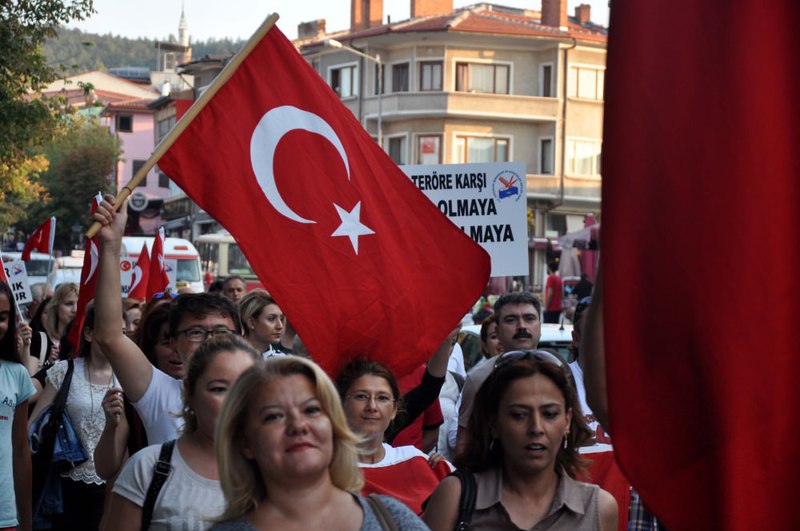 by Daily Sabah Sep 17, 2015 12:00 am
Twelve nongovernmental organizations are coming together in Sıhhiye Square, Ankara today to say no to terrorism and yes to brotherhood. Following the meeting, the participants will walk to the Parliament building. Among the participants, several important nongovernmental organizations, including the Turkish Union of Chambers and Commodity (TOBB), Turkish Industry and Business Association (TÜSİAD), Independent Industrialists' and Businessmen's Association (MÜSİAD) will participate.

Holding a joint press conference with leaders of other nongovernmental organizations and trade bodies, TOBB Chairman Rıfat Hisarcıklıoğlu said on Monday that participants should leave aside symbols, including party flags and carry only Turkish flags instead. "We will say no to terrorism and yes to brotherhood," Hisarcıklıoğlu said, underscoring that the protest aims to bring everyone together as a nation with its "78 million citizens, regardless of [their] ethnicity, identity and beliefs."

He added that the common ground for everyone is democracy, rule of law and respect for human dignity and highlighted that democracy does not only mean rights and freedoms, but also entails responsibility, saying that non-governmental organizations have mobilized with this sense of responsibility in mind and should display their position.

Furthermore on Sunday, another anti-terror meeting, titled "Millions of Breaths as One Voice against Terror," will be organized by the Civilian Solidarity Platform (SDP) in the Yenikapı meeting area in Istanbul. President Recep Tayyip Erdoğan, Prime Minister Ahmet Davutoğlu and Parliament Speaker İsmet Yılmaz will participate in the meeting as well. There will also be a press conference about the meeting today.

Despite national outrage against the PKK, both Republican People's Party (CHP) Chairman Kemal Kılıçdaroğlu and pro-Kurdish Peoples' Democratic Party (HDP) Co-Chair Selahattin Demirtaş opted to not mention the PKK in their statements after the deadly attack. Both leaders, who are accused of collaborating during the June 7 elections to get the HDP into Parliament, received harsh public criticism for not condemning the terrorist organization, but rather criticize state officials. In later days, Kılıçdaroğlu took a tougher stance in his rhetoric against the PKK.

Demirtaş, whose brother is among the PKK ranks, also draws criticism for having direct links to the PKK. After a newspaper published photos of his brother in a PKK camp with other terrorists, Demirtaş said his brother "protects the honor of humanity." The party's deputies not only refuse to condemn terrorist attacks, but also praise them and threaten Turkey. HDP Deputy Abdullah Zeydan threatened Turkey, saying that the PKK has the power to "drown Turkey in its spit" and exterminate Turkey.
RELATED TOPICS