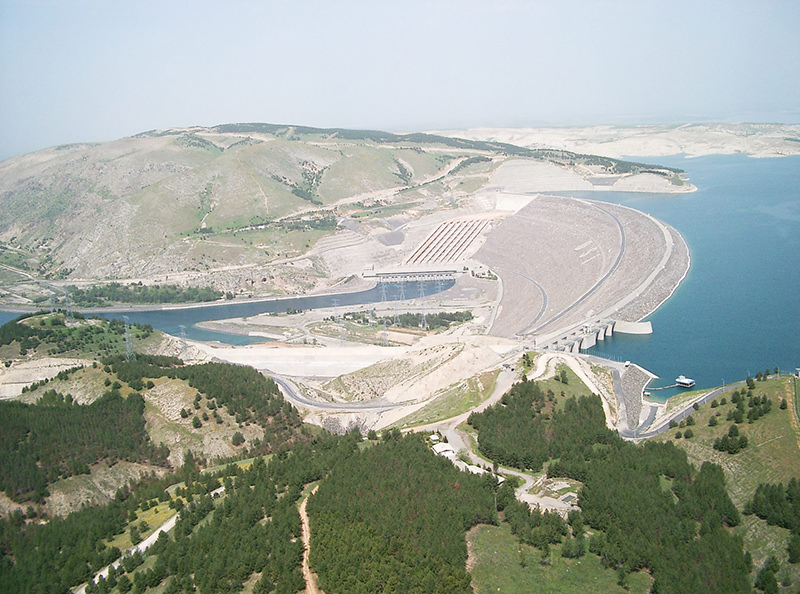 Atatu00fcrk Dam located on the border of Adu0131yaman Province and u015eanlu0131urfa Province in Southeastern Turkey
by Anadolu Agency Sep 17, 2015 12:00 am
Turkey will build dams despite threats from the PKK terrorist organization, Turkish Minister of Forestry and Water Affairs Veysel Eroğlu has said.

In an interview with Anadolu Agency in the capital Ankara on Wednesday, Eroğlu condemned the PKK terrorist organization for attacking Turkish security forces posted at dam sites and burning vehicles used there. He said that the damage caused by such attacks on his ministry projects was so far to the tune of 7.8 million Turkish liras (about $2.6 million).

He recalled the attacks on the Bitlis Güroymak basic drilling site, Silvan Dam, Hani Guclu Pond irrigation project, Kars Sarıkamış Pond, Kuruçay Dam, Dargeiit Ilisu Dam, and a hydroelectric power plant project in Diyarbakır. He said that all such attacks not only impacted his ministry but in fact affected the welfare of Kurdish citizens as well.

He said that the PKK terrorist organization was against dams.

"They say: 'We are against dams'," he said, adding: "[But] if there are no dams and no ponds then we cannot bring irrigation or drinking water to cities? If there was no Atatürk Dam, how could we bring water to [the Turkish province] Şanlıurfa?," the minister asked.

He said that the Silvan Dam project would be Turkey's second biggest dam after the Atatürk Dam, which would meet Diyarbakır's needs for water and create new jobs for around 305,000 people.

He added that several important investments aimed at improving peoples' welfare and creating new jobs in southeastern and eastern regions of Turkey had been signed.

He recalled that Turkey's Justice and Development (AK) Party had made enormous investments without making any distinctions between Turkey's western, eastern, southern or northern regions during the last 13 years.

Eroğlu said that the PKK terror organization was the biggest enemy of the Kurdish people, despite the fact that it claims to fight for their rights.

"Unfortunately, PKK terror organization especially is the biggest enemy of our Kurdish brothers and sisters. It fully targets them, prevents region's development, kills the people, takes their children and girls away to the mountains. It is doing great persecution [of Kurds]," Eroğlu said.

Eroğlu said that it was "essential" that the people living in the region showed "the necessary reaction to the PKK now."

Following a suicide bomb attack in July -- blamed on ISIS -- in the southeastern province of Şanlıurfa that killed over 30 people, PKK terrorist organization has renewed its armed campaign against Turkish forces.

The renewed violence has threatened the reconciliation process officially initiated in early 2013, aimed at ending the 30-year conflict between the PKK and the Turkish state.
Last Update: Sep 17, 2015 4:36 pm
RELATED TOPICS