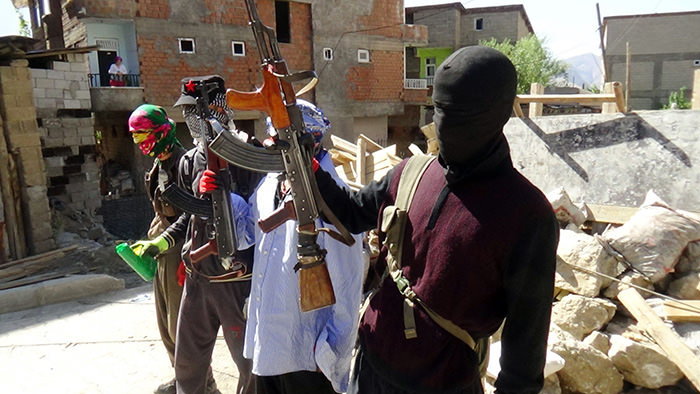 Analyzing the PKK’s recent attacks on security forces, intelligence and defense experts have claimed the terrorist group has built up ammunition stores that can be traced to Turkey’s Western allies. While Turkey fights against ISIS as part of the U.S.-led coalition in Syria and Iraq, its allies support the PYD, the PKK’s Syrian affiliate

Intelligence and security experts indicate that in its attacks against Turkish security forces after ending the cease-fire on July 11, the PKK has been using ammunition that can be traced back to some of Turkey's allies, including Germany, Italy, the U.K. and U.S. In addition, experts claim that the PKK had been amassing ammunition and arms during the two-year cease-fire, exploiting the reconciliation process initiated to halt the conflict, which has been ongoing for more than 30 years.

Speaking to Daily Sabah, Baki Kaya, a former staff colonel in the Turkish Army, claimed that Turkey's allies have been supporting the Kurds in Syria and Iraq in the fight against the Islamic State of Iraq and al-Sham (ISIS), which helps facilitating the transfer of weapons to the hands of the PKK, as a result of the obvious strong link between the Democratic Union Party (PYD) in Syria and the PKK.

As such, through connections between the two groups, "Turkey's Western allies, particularly the U.S., U.K. and Germany, have become partners [indirectly] with a terror group that commits the most vulgar crimes in Turkey and supplies weapons to them," Kaya said.

In an interview with Hürriyet daily on Sept. 14, Cengiz Çandar, a journalist who has covered the Kurdish issue for many years, regarding to the link between the PYD and PKK, said: "If you need to be frank, the PKK and PYD seeming to be two different organisms only serves the recovery of U.S. imagery, because the YPG [People's Protection Units] and HPG [People's Defense Forces] are the same things. There is no difference between the PYD and PKK. The only difference is that when the PYD was created its members were Syrian citizens. Since the Syrian crisis, this difference has also been removed since borders have also been lifted. Of course it is not possible that the Americans do not know this. The U.S. knows it well. But at the moment they do this because this is what serves their interests."

Commenting on the PKK's new arms strategy, Kaya said: "In protecting their camps against land and airstrikes and in supporting attacks against Turkish security forces, they have been using Russian-made DShK 1938s [a Soviet heavy machine gun firing 12.7x108 millimeter cartridges], mortars in various sizes, handmade improvised explosive devices [IEDs] and other explosives."

Kaya also said the group has been using IEDs made with plastic explosives, which makes it harder for them to be detected.

Aydın Çetiner, an intelligence and defense strategist, said the PKK has been using IEDs and mines as a new strategy compared to the 1990s when they used to engage in armed clashes.

"Germany has given many Milan anti-tank missiles, Italy has sold mines and France has also supported the PKK with military equipment," Çetiner told Daily Sabah.

"The PKK currently uses mini drones and it also has two currently passive radars based in its Qandil Mountains camps," he said.

Moreover, Çetiner added that the PKK has been using a new strategy in its road bombings compared to its previous attack. "Whereas previously the bombs would be placed on roads and roadsides, now they place the bombs on sharp mountain sides, causing a side blast that run the cars down the slopes of the hills to cause more damage," Çetiner said.

Çetiner also said that the current fight between ISIS and the PYD's YPG benefits the PKK, as European countries have been helping the YPG as part of protecting their regional interests.

Similar to Çetiner's comments on German arms support to the PKK, Daily Sabah columnist İlnur Çevik also said on September 15 column: "The arms used against Turkish soldiers in the Dağlıca attack in the southeastern border province of Hakkari turned out to be German-made. They included deadly Milan anti-tank missiles, fuses and other weapons that were also displayed in the pages of Der Spiegel magazine. How and where the PKK acquired these weapons should be a major issue for the German press and German politicians. Yet we see a peculiar kind of violence that is hard to comprehend."

"The PKK could be planning for a so-called autonomous Kurdish state that will stretch over Turkey, Iran and Syria. However, such establishment will not last long, as given its geographical disadvantages, not having a coast and trade routes, it will make the new establishment dependent on its neighbors. Also, not having more sophisticated defense systems and an international assurance for protection of its borders will make it a state that is not desirable. As such, to isolate such disadvantages and problems, the aim has been shifted to establish a line in northern Iraq and Syria to open up to the Mediterranean Sea."

The fighting between the PKK and security forces saw a fragile lull for two-and-a-half years starting in early 2013 during the reconciliation process.

After Turkey's June 7 parliamentary elections, the Kurdish Communities Union (KCK), the umbrella organization that includes the PKK, declared an end to the cease-fire that imprisoned PKK leader Abdullah Öcalan had negotiated before with the PKK initiating attacks on security forces after July 11.

After the end of cease-fire, more than 110 Turkish security forces have been killed in terrorist attacks including the recent Dağlıca and Iğdır attacks that respectively claimed the lives of 16 soldiers and 13 police officers.

Formed in 1978, the PKK had been fighting the Turkish government for an independent state until the early 2000s. The group then shifted its goal to autonomy in the predominately Kurdish regions of Turkey.
Last Update: Sep 19, 2015 1:23 pm