Turkey puts aside political differences in Sunday’s rally, says ‘no to terror’ 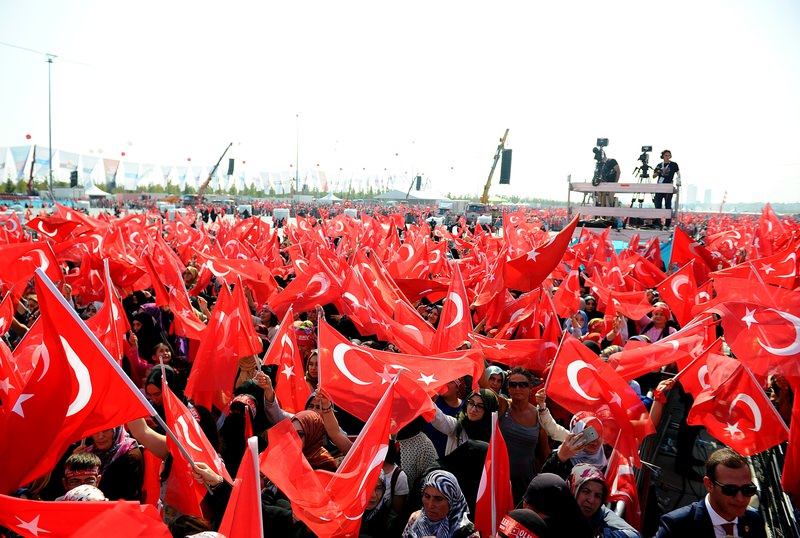 Shouting slogans such as ‘eliminate terror, invite unity’ with Turkish flags in hand, millions of citizens on Sunday gathered at a huge rally to say no to terror. PM Davutoğlu described Turkey’s combat against terrorism as an operation in the name of ‘peace and democracy’ during his speech

Millions of people on Sunday assembled at Istanbul's Yenikapı Square to unite against terrorism, calling for an end to violence and a return to peace, bringing to mind the 1997 mass protests in Spain when millions flooded the streets against ETA terrorism. In a spontaneous demonstration, dubbed "Millions as One Voice against Terror," the masses that gathered at Yenikapı called on individuals and movements covertly supporting the PKK terrorist organization to make their stance clear. The pro-Kurdish Peoples' Democratic Party (HDP) leadership has been criticized for its failure to openly condemn PKK attacks on civilians and members of the security forces. 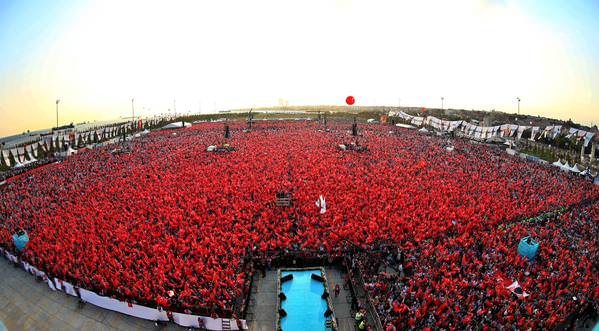 The demonstration saw speeches made by President Recep Tayyip Erdoğan and Prime Minister Ahmet Davutoğlu, both of whom openly called for a united stance against terrorism and for peace.

In his speech, Erdoğan thanked citizens who condemned the PKK's terrorist activities with their flags, minds and firm stances. "The best reaction to terrorism is displayed here with flags and unity slogans," he said.

Stressing that there were many people from different ethnic origins present, he said there is no ethnic problem across the country but the problem is with terror and the country's fight against terrorism. "We are at the point that we can say 'Turkey has no Kurdish issue, Turkey has a terror issue.' Of course, our Kurdish brothers have demands and we do our best to respond to those demands as we did before," he added.

Davutoğlu said during his speech that the crowd will strengthen unity in the country, and underscored that everybody in the country is waiting for the brotherhood that Turkey has been longing to see. Calling Turkey's fight against the PKK terrorist organization as a "peace and democracy operation," he sent three messages to the nation,remarking that no one should discriminate against one another based on their ethnic origins, that all citizens living under the Turkish flag are equalsand that no citizen in eastern Turkey going to the ballot box on Nov. 1 shouldbe threatened by the PKK.

"Everyone living under the Turkish flag are equals," Davutoğlu said, underlining that the government has worked hard to eliminate the discrimination that existed for years across the country. The prime minister further promised to fight against terrorism until the country sees the armed groups lay down their arms and Turkey is free from all terrorist activities.

Putting aside political differences, more than a million citizens residing in Turkey shouted slogans denouncing terrorist activities and invited people to strengthen in unity across the country, while miniature Turkish flags covered the rally.

Huge posters saying, "We will be content if we share, disappear if we divide," "eliminate terror, invite unity," "terror is a crime against humanity," and "no more mothers crying, peace across the country" were hung all around the meeting area. The names of the 81 provinces in Turkey were also hung on pennants around the rally area. No symbols apart from Turkish flags were carried by participants during the rally to show that national unity isabove all political differences.

In a video presentation at the beginning of the rally, a chronology of the Kurdish issue was shown, including how the reconciliation process began, steps taken toward the end of the decades-old PKK conflict in eastern Turkey, messages from citizens residing in Kurdish-populated provinces and how the PKK blatantly launched attacks that left hundreds of people dead.

Organized by the Civilian Solidarity Platform (SDP), the meeting brought together people from all walks of Turkish society and was supported by more than 500 nongovernmental organizations (NGOs) around Turkey. A huge social media campaign was also conducted to invite citizens to Sunday's rally. Giving the opening speech at Sunday's anti-terror rally, SDP head Ayhan Oğan said the latest terror attacks by the PKK had reached an unbearable point, and said: "The rally would strengthen unity and pave a way to see the state and the nation embrace each other."

Turkey has been hit by violence since a suicide bomb attack by a suspected Islamic State of Iraq and al-Sham (ISIS) supporter killed 32 activists in Suruç on July 20. The government has intensified its counterterror operations following the recent attacks carried out by the PKK, which is recognized as a terrorist organization by the U.S., EU and Turkey. Formed in 1978, the terrorist group was fighting the government for an independent state until the early 2000s. The group then shifted its goal to autonomy in predominantly Kurdish regions of Turkey. The PKK announced on July 11 that the cease-fire, which was declared via a message from the PKK's imprisoned leader Abdullah Öcalan in 2013, has ended and launched an attack in eastern Turkey.