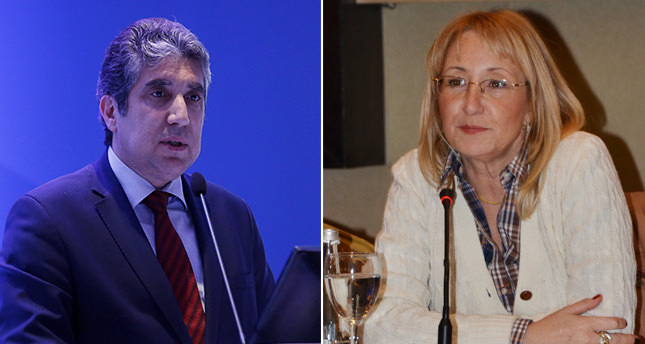 The resignations came during a cabinet meeting in Ankara. Following the ministers' resignation, just before the press meeting, a statement made by the prime minister's office said, "Mr. Prime Minister thanked them for taking part in the election government as a requirement of constitutional obligation and said leaving was also their own decision. A commissioning will be made soon."

Müslüm Doğan, from İzmir province and Ali Haydar Konca, from Kocaeli province, were the HDP deputies who accepted Prime Minister Ahmet Davutoğlu's invitation to join an interim power-sharing cabinet to lead the country to a snap election in November.

Beril Dedeoğlu, born in 1961, is a lecturer and the Head of Department of International Relations at Galatasaray University's Faculty of Economics and Administrative Sciences. Dedeoğlu has focused on Turkey's foreign policy and issues of international security as part of her academic research.

Newly appointed Development Minister Mustafa Cüneyd Düzyol, born in İzmir in 1964, has previously served as the Deputy Undersecretary for Ministry of Development since 2009.

Prior to his position as the deputy undersecretary, Düzyol also the served as General Director, Economic Sectors and Coordination General Directorate at State Planning Organization from 2003 to 2009.