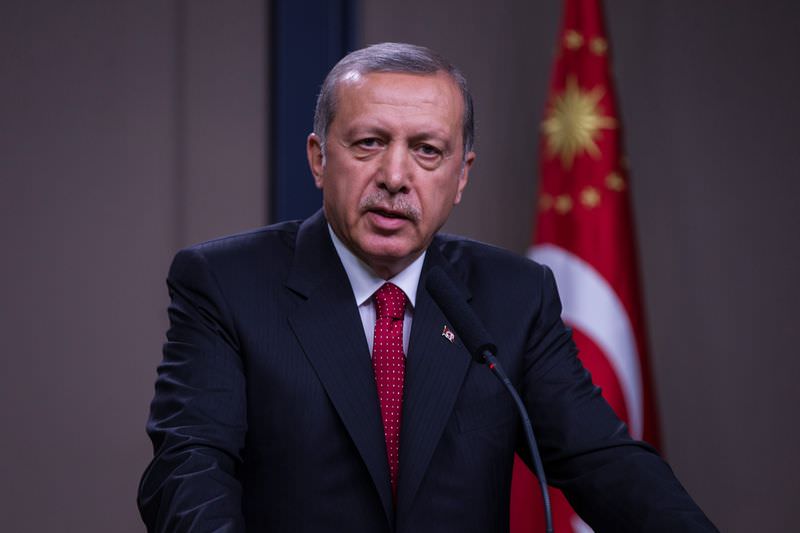 by daily sabah Sep 29, 2015 12:00 am
President Recep Tayyip Erdoğan on Tuesday said Turkey will continue to fight PKK terrorists in a determined manner, adding that the Turkish military killed over 30 PKK terrorists overnight in a cross-border operation in northern Iraq, referring to an operation that took place on Friday. He said the PKK aims to divide the unity between Kurds and Turks in Turkey and criticized the PKK and its supporters for causing harm to Kurds.

Speaking to municipal headmen at the Presidential Palace, Erdoğan said Turkey will not give up its fight against the PKK, which indiscriminately attacks security forces and civilians and poses a threat to national security. "Within the framework of the Constitution, I will continue to struggle against the terrorists for unity and peace in my country," Erdoğan said.

Erdoğan said the PKK disguises its unlawful acts, but the military continues to destroy PKK ammunition depots. He underscored that the terrorist organization intimidates local businessmen and forces them to pay money in southeastern regions, but the state will continue to take concrete action against them.

In his speech, Erdoğan asked: "Is it possible for an organization that shoots, ruins and destroys ambulances, fire vehicles, mosques, schools, work places and homes to struggle for the people in the region?" He said the PKK is "an enemy" not only of the country, but also of "our Kurdish brothers," adding that it wants to pit Turks and Kurds against each other.

He also said the PKK is not a part of the country, adding: "Those who attack our country's benefits and aim at its unity and integrity do not belong to this nation, whatever title they have, even if they are in Parliament." The latter comment is a thinly veiled reference to the Peoples' Democratic Party (HDP).

Without naming the HDP explicitly, Erdoğan asked: "Those who backed the terrorist organization, what did you do apart from digging ditches. While digging, you disturbed the people there." In order to take control of some towns, the PKK's urban wing dug ditches and set up barricades with alleged help from HDP officials in the region.

"The PKK is not local and can never be a part of this country, nor this nation" Erdoğan said, and added that all citizens who are loyal to the state, regardless of their ethnic or religious backgrounds, are equal citizens of Turkey.

In other news, two police officers were killed Monday in a PKK terrorist attack in southern Adana province. Militants who were reportedly on motorcycles opened fire on a police vehicle in front of a private hospital in Adana's Seyhan district at around 8:00 p.m. The perpetrators of the attack fled the scene on motorcycles while the wounded police officers were taken to the hospital to receive treatment, but both of them succumbed to their injuries. Security forces have launched an operation to arrest the perpetrators of the attack.

The PKK, which is listed as a terrorist organization by Turkey, the U.S. and EU, resumed lethal attacks in July in the predominantly Kurdish southeast and east, following a lull stemming from the government-initiated reconciliation process to end PKK terrorism and improve the lives of the Kurdish community.
Last Update: Sep 29, 2015 10:14 pm
RELATED TOPICS