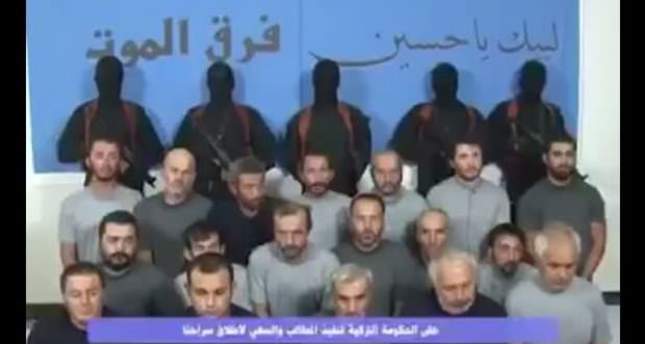 by Daily Sabah with Agencies Sep 30, 2015 12:00 am
16 Turkish workers who were kidnapped in Iraq's capital Baghdad have been released on Wednesday as President Recep Tayyip Erdoğan instructed the prime ministrial plane 'TC-ANA' to head to Iraq for the transfer of the released workers.

Prime Minister Ahmet Davutoğlu had a phone conversation with the Turkish workers, and said that the Turkey's ambassador to Iraq is accompanying them to Baghdad.

He said that they will be brought back to Turkey as soon as possible.

"Our ambassador in Baghdad just received 16 workers who had been held captive for a while in Baghdad. I talked to some of them over the phone" PM Davutoğlu said on his Twitter account.

President Erdoğan also congratulated over the phone Turkey's Baghdad Ambassador Faruk Kaymakcı and two of the freed workers, and offered them his best wishes.

Kaymakcı had accompanied the released workers in a car from southern Iraq's Basra region to the Turkish embassy in Baghdad.

All the abducted Turkish workers were employees of Nurol Holding, a Turkish construction firm that is currently carrying out developmental projects in the Iraqi capital.

The workers were found in the area of Maseeb, 40 kilometers south of Baghdad, according to officials.

"They are now in Baghdad and in good health," an official said on condition of anonymity. He did not specify their number.

No further information was available about the circumstances of their release or when they were freed.

The Shiite terrorist group that kidnapped 18 Turkish workers on Sept. 2 released a video early Monday that claimed to show the group had freed all the captives.

The video published on the terrorist group's social media account shows the kidnapped workers being released by members of the terrorist group. The Shiite militant group previously freed two of the workers, Necdet Yılmaz and Ercan Özpilavcı, and they were brought to Turkey on Sept. 16.