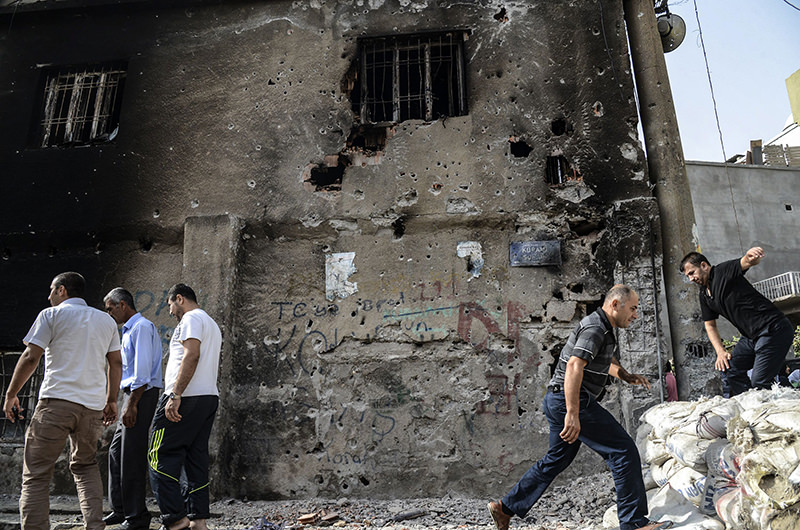 | AFP Photo
by Anadolu Agency Sep 30, 2015 12:00 am
The PKK terrorist organization has claimed the lives of 35 civilians and 130 security personnel since July 22, data compiled and provided by a security source reveals.

In addition, more than 1,370 PKK terrorists have been killed in various operations against the group, both in Turkey and northern Iraq, including the Qandil Mountains, within the same timeframe, according to the data.

Founded in late 1978, the PKK is considered a terrorist organization by Turkey, the EU and the United States.

Under its now-imprisoned leader, Abdullah Öcalan, who has been an inmate of a prison on İmralı island off Istanbul since his capture in 1999, the PKK conducted its first attacks on Aug. 15, 1984, when it targeted police and gendarmerie bases in Eruh, Siirt, and Semdinli, a district in nearby Hakkari province.

The PKK has killed more than 6,700 civilians since it launched its offensive in 1984.

The deaths of noncombatants, including woman and children, highlight the toll of more than 30 years of fighting, mostly in Turkey's southern and eastern provinces.

Over the following 31 years, the militant group has carried out 83,500 attacks.

Some of the attacks have significance due to their size, timing and indiscriminate nature.

Over a 24-hour period on July 8, 1987, the PKK killed 44 civilians, including women and children, in four attacks in Mardin and Hakkari provinces.
Six years later, on May 24, 1993, PKK terrorists killed 33 security force personnel and seven civilians on the Bingöl-Elazığ Highway in central eastern Turkey.

Last year, protests on Oct. 6 and Oct. 7 across Turkey, over the siege of Kobani, led to the deaths of 33 civilians and two police officers.
Between January and July this year, PKK terrorists carried out 83 attacks, according to security sources. Over the last 10 months, 62 civilians were killed by terrorists.

The PKK has been increasingly using children in its terrorist acts.

According to figures shown to Anadolu Agency by the Turkish security source, the terrorist organization kidnapped 2,052 children and took them to the mountains over the last two years.

The figures about the children were complied after family's informed authorities about their abductions.

Between 2013 and 2015, at least 410 children fled from the PKK terrorist organization and surrendered to Turkish security forces.

Testimony given to police intelligence also claimed that the PKK bribed children in southeastern provinces to make them attack Turkish forces. Children said that they received an average of TL 100 to carry out attacks on Turkish forces. If they were old enough, PKK terrorists also provided them with guns, the children said.

The reconciliation process refers to the 2013 initiative of the Justice and Development Party (AK Party) government that aims to end the decades-old conflict with the PKK, which has claimed the lives of more than 40,000 people.

The pro-Kurdish Peoples' Democratic Party (HDP) has been instrumental in the process, which ran for two-and-a-half years with the aim of bringing the 30-year Kurdish conflict to an end.

However, fighting resumed following the July 20 Suruç bombing that was blamed on the Islamic State of Iraq and al-Sham (ISIS). The PKK claimed responsibility in the killing of two police officers in their homes in Ceylanpınar following the Suruç attack.

The violence has threatened to overshadow the upcoming Nov. 1 election, which was called after the June 7 polls failed to produce a majority party and talks to form a coalition failed.

"The organization [PKK] has exploited and betrayed the process. I say to them: you cannot maintain it, even if you wanted. Because with these actions the process became unmaintainable," Akdoğan said in his address to the Justice and Development Party's local administration consultation meeting in the capital Ankara on Monday.

"They [PKK] wanted to stir a revolutionary people's war. This project has also collapsed," as well as the projects to declare autonomy in southeastern regions, he added.