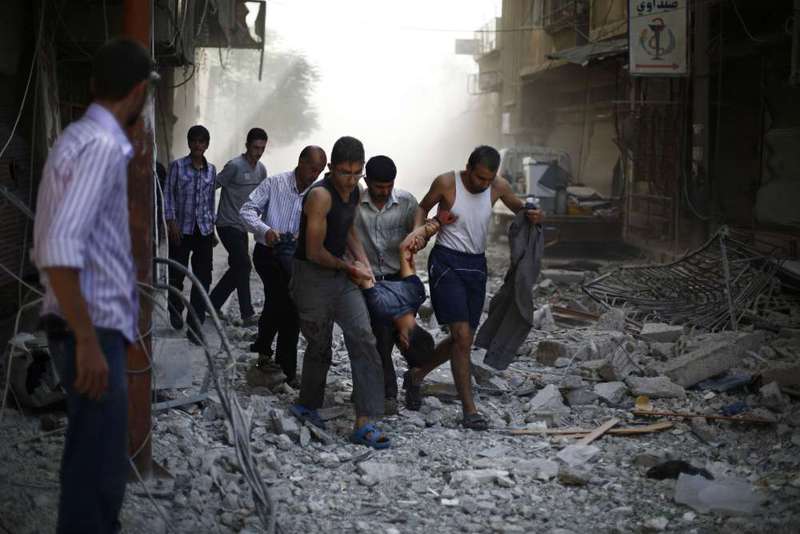 Syrians carry a wounded man following reported airstrikes on the rebel-held town of Douma on Friday.
by Daily Sabah with Wires
Oct 03, 2015 12:00 am

Russia bombed Syria for a third day on Friday, mainly hitting areas held by opposition groups, rather than ISIS fighters it said it was targeting. In a joint letter signed by seven key countries, Moscow has been urged to cease its airstrikes

Russia bombed Syria for a third day on Friday, mainly hitting areas held by Western-backed Syrian opposition groups, rather than the Islamic State of Iraq and al-Sham (ISIS) fighters it said it was targeting. Washington, which is leading its own air campaign against ISIS, says Moscow has been using its campaign as a pretext to hit other groups opposed to Russia's ally, President Bashar Assad. Turkey, its key Western allies and Gulf nations on Friday urged Russia to stop attacks on the Syrian opposition, warning Moscow's bombing campaign would "fuel extremism." "These military actions constitute a further escalation and will only fuel more extremism and radicalization," said a statement by seven countries including Turkey, Saudi Arabia and the United States. "We call on the Russian Federation to immediately cease its attacks on the Syrian opposition and civilians," added the statement, which was published on the websites of foreign ministries in Turkey, Germany and France. The states, most of which are full members of the U.S.-led coalition against ISIS, said Russia should "focus its efforts on fighting ISIS." Some of the groups that have been hit are supported by countries that oppose both Assad and ISIS, including at least one group that received training from the CIA. Moscow said on Friday its latest strikes had hit 12 ISIS targets, but most of the areas it described were in parts of the country where the militant group has little or no sway.

The U.K.-based Syrian Observatory for Human Rights, which monitors the conflict with a network of sources on the ground, said ISIS had no presence in the western and northern areas that were struck.

Democratic presidential candidate Hillary Clinton called for the creation of a no-fly zone inside Syria. "I personally would be advocating now for a no-fly zone and humanitarian corridors to try to stop the carnage on the ground and from the air, to try to provide some way to take stock of what's happening, to try to stem the flow of refugees," Clinton said in an interview with NBC affiliate WHDH in Boston.

Prime Minister Ahmet Davutoğlu was "pleased" to hear that the leaders of three fellow NATO members were extending their support to the idea of establishing a safe zone in northern Syria, a policy Ankara has pursued for the last two years. Speaking to reporters in New York early this week, Davutoğlu cited recent discussions with the leaders of the U.S., the U.K. and France over the creation of a zone inside war-torn Syria to deal with the current refugee crisis. "I am very pleased to observe that the three leaders see Turkey's demands on a safe zone as more than needed and right, during our discussion with Mr. Hollande, Mr. Obama and Mr. Cameron," he said. Davutoğlu added that the idea of establishing a safe zone is not related to Turkey's national interests, "but rather to prevent the spread of the refugee problem while keeping the refugees in Syria and offering the best services [to them] in Syria, ensuring everyone remains in their homeland in the safe zone."

Furthermore, Saudi Foreign Minister Adel al-Jubeiri, speaking to journalists in New York, was cautious not to criticize the U.S. alone, bemoaning a "lack of robust action by all of us."

But he was clear on why the Russians had found an opening to insert themselves into the conflict.

"That's what I mean by 'not enough happened.' That's why four years later we're in the situation we're in," he said.