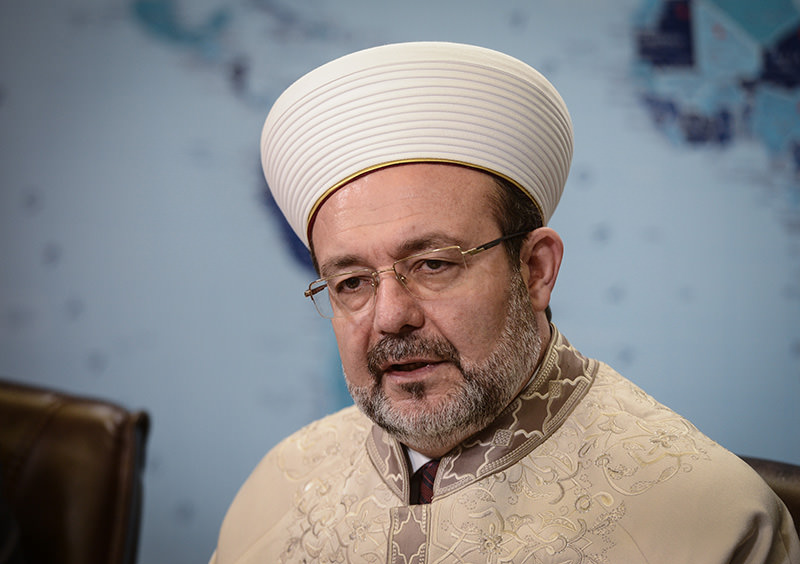 |AA Photo
by Anadolu Agency
Oct 06, 2015 12:00 am
The head of the Turkish Presidency for Religious Affairs Mehmet Görmez said on Tuesday that Al-Aqsa's temporal and spatial division is unacceptable.

"We, as Muslims, do not accept the temporal and spatial division of Al-Aqsa," said Görmez at Anadolu Agency's Editor's Desk.

Israeli security forces had stormed the Al-Aqsa Mosque compound on Sept. 13, using rubber bullets, teargas and stun grenades to disperse Muslim worshippers near the mosque for three days, which at the time drew considerable international outcry.

Major Palestinian figures and resistance factions warned that Israel was working on the spatial and temporal division of al-Aqsa Mosque (between Muslims and Jews).

For Muslims, Al-Aqsa represents the world's third holiest site. And, in the Jewish faith, it is referred to as the Temple Mount, the site of two Jewish temples in ancient times.

Certain extremist Jewish groups have called for the demolition of the al-Aqsa Mosque so that a Jewish temple might be built in its place.

In September 2000, a visit to al-Aqsa by controversial Israeli politician Ariel Sharon sparked what later became known as the Second Intifada-a popular uprising against the Israeli occupation in which thousands of Palestinians were killed.

Görmez said that it was impossible to separate what happens in Palestine from what happens today in Damascus, Cairo, Baghdad and even in Turkey's southeastern regions.

"We consider and regard them as a whole. This question must be asked to all humanity: Is it not enough blood that you have been shedding in Islamic geography for a century so that owners and residents of the state, that you established here, feel comfortable?" he said, referring to Israel.

He also touched upon the deadly Hajj stampede in Mina and criticized Saudi officials.

"Satellite cities, that can host millions of people, could have been established in the Jeddah and Medina plains instead of building skyscrapers around Holy Kaaba by breaking mountains which have historical importance for us," he said.

Görmez added that a subway network could also have been built around the cube-shaped Kaaba, Islam's most sacred site.

Mehmet Görmez told that his directorate formed a commission after the Hajj disaster.

"We listened to witnesses on the scene through a delegation via the commission. We made a report and we are about to finish it," Gormez said, adding that they will give the report to Saudi officials and to the Hajj Ministry.

At least 769 pilgrims lost their lives in a stampede at Mina as they returned from or headed to a ritual 5 kilometers (3 miles) east of Mecca. The incident was the deadliest Hajj disaster in 25 years.

On Sept. 11, 107 people were killed by a crane that collapsed at the Grand Mosque in Mecca.

Around 2 million Muslims from around the world participated in this year's Hajj, the pilgrimage that is one of the five pillars of Islam and which every able-bodied Muslim must perform at least once.
Last Update: Oct 06, 2015 8:29 pm