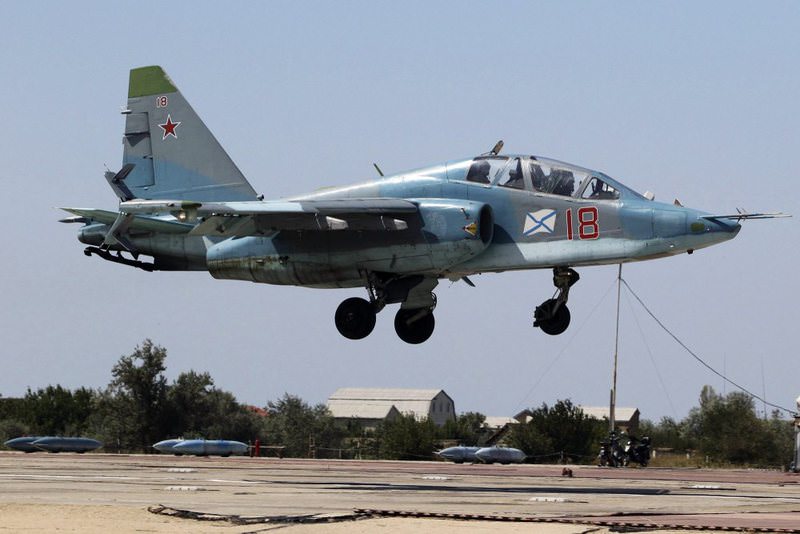 by Fatih Şemsettin Işık
Oct 06, 2015 12:00 am
The Foreign Ministry on Monday summoned the Russian ambassador over an airspace violation. Prime Minister Ahmet Davutoğlu indicated that "the incident occurred by mistake." According to a statement from the ministry, Russian fighter jets violated Turkish airspace on Oct. 3. "A fighter aircraft belonging to the Russian Federation violated Turkish airspace at 12:08 p.m. south of the Yayladağı/Hatay region," the statement said. "The Russian aircraft exited Turkish airspace into Syria after it was intercepted by two F-16s from the Turkish Air Force, which were conducting patrols in the region."

Speaking in a live interview on HaberTürk TV, Davutoğlu said Turkey's rules of engagement were clear, whoever violates its airspace. He said Turkey maintains the right to take military action against any object that enters its territory. "I should express it clearly, even if it is Syria, Russia or any other country's planes, Turkey's military engagement rules are valid for all," Davutoğlu said.

Davutoğlu also said Russia assured Turkey that the airspace would not be violated again.

The Russian Embassy in Ankara admitted that Russian aircraft violated Turkish airspace. "Such an incident actually took place," embassy spokesman Igor Mityakov said, and added: "As far as I know, explanations about this matter were given to a military attache at the Turkish Embassy in Moscow."

Interim Foreign Minister Feridun Sinirlioğlu called Russian Foreign Minister Sergey Lavrov to complain about the incident and the Russian ambassador was summoned to the foreign ministry. Acting Undersecretary Ahmet Muhtar Gün protested "strongly" about the incursion to the ambassador and demanded it never happen again. Gün said Russia would be responsible for any "undesired incident" resulting from a future violation.

Along with Russian jets' violating a NATO country's airspace, usage of Patriot missiles became a matter of debate, regarding the German and the U.S. decision to pull Patriot batteries that were stationed in Turkey in recent months.

Ufuk Ulutaş, a foreign policy coordinator at the Foundation for Political, Economic and Social Research (SETA), said there is a weakness in U.S. intelligence about Russia's activities in Syria, if not the missiles would not have been pulled out of Turkey's Kahramanmaraş province.

"It is obvious that there is a weakness in U.S. intelligence about the issue, despite being said that there is a significantly diminished threat from Syria toward Turkey," referencing the statement made by Pentagon spokesman Capt. Jeff Davis on Aug.24.

Davis had said: "It's widely documented that they [Syria] fired significant numbers of Scud [missiles] early on in their civil war at targets inside their country, and that has now largely stopped," adding that the decision to not renew the stationing of the U.S.'s anti-missile batteries was also based on the need to update the systems.

Furthermore, a German Ministry of Defense spokesman had given the same reason for the decision.

Ulutaş also claimed that Germany, although being a NATO ally of Turkey, has acted as a PKK-ally. "Since Turkey started to conduct airstrikes against the PKK, debates became widespread in Germany and even became a red line-like issue for the country," he said, adding that not only Germany but all NATO allies had a hesitant attitude toward Ankara's plan for a safe-zone.

"Together with our NATO partners we have defended the Turkish people against possible missile attacks from Syria," German Defense Minister Ursula von der Leyen said in a statement. "Our Patriot missiles have successfully conducted their mission."