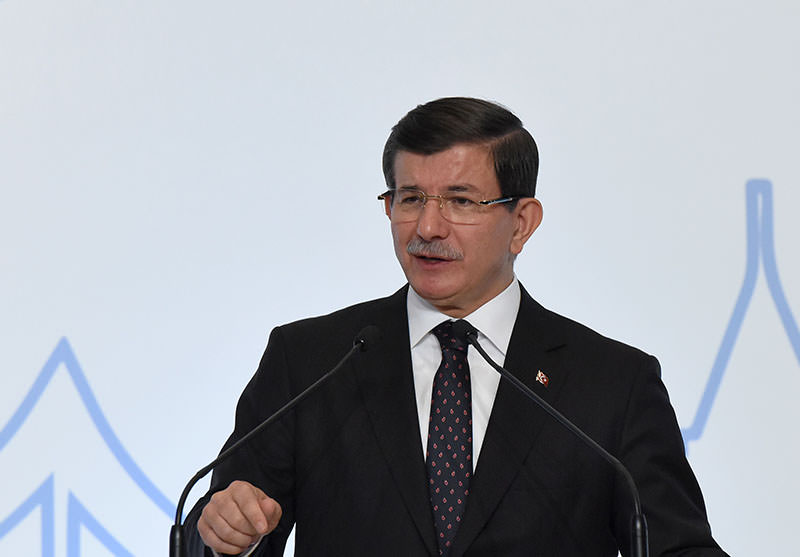 PM Davutou011flu delivers a speech during a press conference with Bulgarian Prime Minister during the 8th Global Forum on Migration and Development Submit on October 14, 2015 in Istanbul. (AFP photo)
by Anadolu Agency Oct 14, 2015 12:00 am
Prime Minister Ahmet Davutoğlu said on Wednesday that the Syrian regime, ISIS and the PKK made an agreement in May to attack the anti-Assad opposition forces and share Turkey's border with Syria.

"Daesh [Arabic acronym of ISIS], PKK and the [Syrian] regime sat around a table on May 28 in Hasakah [in northeastern Syria] and reached an agreement to attack the opposition," he told a live interview on private Show TV channel.

Davutoğlu stressed that ISIS and the PYD, or the Syrian Democratic Union Party, also agreed with the regime of Bashar al-Assad during that meeting to share the Turkish border.

PYD is a Syrian-based affiliate of the PKK, which is considered a terrorist organization by Turkey, the U.S. and the EU.

"The reason we did not shoot PYD is not its innocence; we will do it if required. We will do what is necessary for Turkey's safety," Davutoğlu said.

His remarks closely followed the summoning of American and Russian ambassadors to the Turkish Foreign Ministry earlier in the day for warnings about the sensitivities regarding Turkey's position on the PYD and Washington's military aid to the group, according to diplomatic sources.

"Our message to the Americans, all allies and Russia is very clear: We will not hesitate even a moment [to respond] if the weapons aid to PYD so close to Turkish border becomes a threat to Turkey in any way and PYD begins to harm Turkey via infiltrations like the PKK or weapons transfer," the prime minister said.

Davutoğlu highlighted that Turkey will certainly respond if the PYD makes any attempt to enter Turkey over Iraq.

"At a time when the PYD is so nested with the PKK, which is attacking Turkey, nobody can justify the weapons given to PYD by a friend and ally, or a neighbor country like Russia," he said.

The U.S. media reported that Washington airdropped 50 tons of small arms ammunition and grenades in northern Syria on Sunday after effectively ending the failing train-and-equip program, which was supposed to train moderate opposition forces to take on Bashar al-Assad's troops.

Davutoğlu called on these countries to deliver weapons aid to Free Syrian Army (FSA) and the Kurdish brigades in it instead, as a "justifiable action".

"Let them come and stand as a supporting structure near our border that does not attack Turkey but nobody should ever dare to play double games. Nobody should think that they can put our stability under threat by harassing Turkey inside and outside," he added.

Earlier on Wednesday, Davutoğlu warned during a press conference with his Bulgarian counterpart that Turkey will not tolerate terror from Syria and Iraq, nor that weapons stockpiled there, reach Turkey.

"No one can guarantee that arms sent to the PYD today will not later be used by the PKK," said Davutoğlu. "Turkey will not tolerate arms aid to groups linked to the PKK."

The Turkish army began air-and-ground operations against the PKK in July both inside Turkey and in northern Iraq, as it renewed its armed campaign against the Turkish state following a two-and-a-half year lull in the fighting.
Last Update: Oct 15, 2015 12:00 am
RELATED TOPICS