US denial of weapons transfer belied by grateful PYD leader 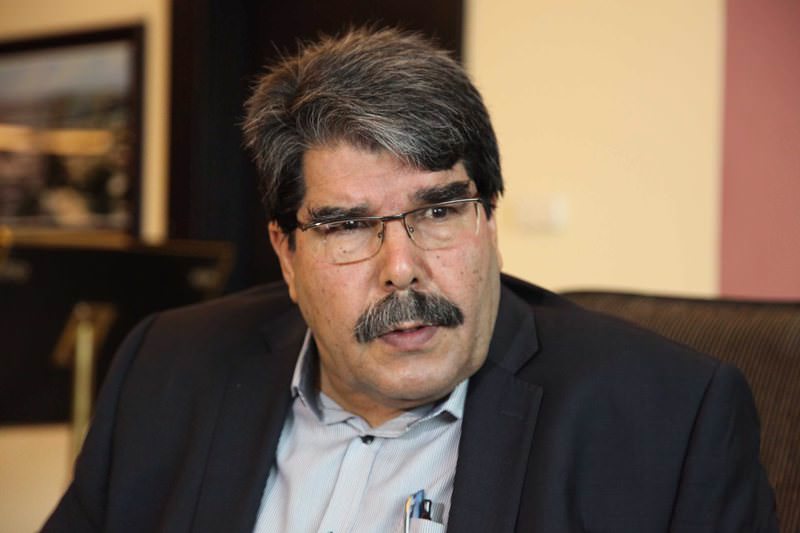 The U.S. tries to placate Turkish fury over reported weapons airdrop to the PKK-linked PYD by denying it ever took place, but top PYD leader and locals contradict the claim by voicing their appreciation for the assistance

Speaking to PKK-affiliated Fırat News Agency, Democratic Union Party (PYD) Co-Chair Salih Muslim threatened to retaliate should Ankara take action against it. He also contradicted the U.S., saying the U.S. air force airdropped 50 tons of weapons and ammunition to its armed People's Protection Units (YPG). Prime Minister Ahmet Davutoğlu Wednesday reiterated Ankara's stance on arms delivery to the PKK affiliate in Syria, the PYD, and its armed wing the YPG, saying the Turkish state has informed the United States and Russia that it definitely cannot excuse any cooperation with terror organizations.

"If Turkey attacks Rojava we will defend ourselves," Muslim said in the interview, adding that the YPG is preparing for an offensive in Raqqa and Jarabulus. Meanwhile, Muslim further added that the delivery was received by them and the U.S. will continue to deliver arms. After confirmation from the Pentagon that the U.S. air forces on Monday dropped 50 tons of ammunition, highly likely to the PKK's affiliate YPG according to reports, Prime Minister Davutoğlu expressed his dissatisfaction with the delivery and Tuesday stressed that the YPG will get the same response should it pose a threat to Turkey's national security.

Davutoğlu once again spoke on the issue on Wednesday at a press conference and warned Washington as well as the Kremlin that the arms delivered to the YPG may fall into the hands of terrorists, namely the PKK.

While Ankara summoned the U.S. and Russian ambassadors about the issue, Russian Foreign Minister Sergey Lavrov spoke in an interview with NTV in which he said: "I want to be honest, we barely have any doubt that at least a considerable part of these weapons will fall into terrorists' hands."

As Russia voices concerns over terrorists possibly acquiring arms, the U.S. dismissed claims that it air-dropped ammunition to the YPG and said that the delivery was acquired by Syrian Arabs. However, speaking to a U.S. newspaper, a YPG militant said that the YPG had received arms from the U.S.

Meanwhile, a U.S. official from the Office of the Secretary of Defense told Daily Sabah on Wednesday: "We've said that this airdrop supported Arab groups. We share the concern of our Turkish partners over the sensitivity of expanding Kurdish control into traditionally non-Kurdish areas in Syria."

Elissa Smith said further: "This successful airdrop provided ammunition to Syrian Arab groups whose leaders were appropriately vetted by the United States and have been fighting to remove ISIL from northern Syria. The airdrop included small arms ammunition."

In addition, a local from Kobani in northern Syria said the U.S. provided 120 tons of arms to the YPG, The Associated Press reported. Meanwhile, Muslim also commented on the issue in a media outlet close to the PKK, saying the delivery was received by them and the U.S. will continue to deliver arms.

Whereas repots have so far claimed the opposite of what the U.S. has said, Davutoğlu gave strong signs that Ankara is firm on responding to any cooperation with the PKK affiliates: "Just as ally countries would not excuse arms delivery to groups affiliated with al-Qaida, Turkey also definitely would not excuse arms delivery to PKK-affiliated groups and allow any toleration regarding this subject."

President Recep Tayyip Erdoğan on Wednesday shared his views on PKK affiliates: "For Turkey, the PKK-affiliate PYD and [its] YPG are no different from ISIS [Islamic State of Iraq and al-Sham] and the DHKP-C [Revolutionary Peoples Liberation Party-Front].

Erdoğan also said that the notion of my terrorist and your terrorist is as dangerous as terror itself. Recalling terrorist attacks carried out by the PKK that claimed the lives of security forces and civilians, Erdoğan slammed those trying to bolster the image of the PKK and its affiliates.