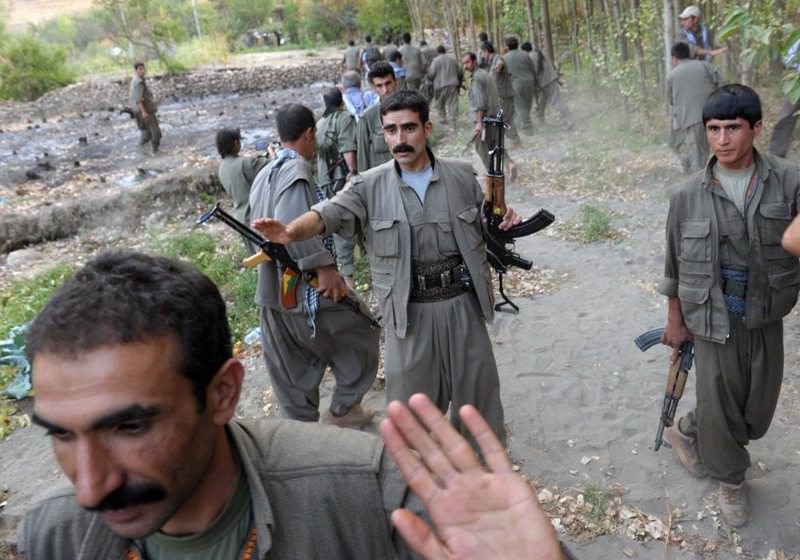 Ankara is resolute to prevent U.S. provided arms to the PYD from ending up with the PKK. Turkish officials have expressed their discomfort to the U.S. and Russia, citing the PKK has received these weapons and used them in their attacks across Turkey

Prime Minister Ahmet Davutoğlu's repeated warnings against weapons aid to the PKK-affiliated People's Protection Units (YPG), the armed wing of the Democratic Union Party (PYD) in Syria, is based on first-hand intelligence that indicates these arms eventually ended up in the PKK's armories in Northern Iraq. Davutoğlu, who is concerned about these weapons being used against Turkish soldiers, said on Wednesday that Turkey would take action the moment weapons sent to the PYD posed a threat. "No one can guarantee that arms sent to the PYD today will not later be used by the PKK," said Davutoğlu.

The prime minister also said that the PKK was cooperating with both ISIS and the Syrian regime, citing a secret meeting in May where officials from the groups agreed to attack the anti-Assad opposition. The intelligence leading Turkish officials to believe that American weapons are in the PKK's hands came from Turkish airstrikes against PKK arms depots in Northern Iraq in the past few months. Special Forces and local intelligence showed that anti-tank mines, rocket launchers, machine guns and anti-aircraft guns given by the U.S. to the PYD were stored in these armories.

Ankara was alarmed following a statement from the Pentagon on Monday indicating an airdrop had been conducted in efforts to provide arms and ammunition to resupply local forces to enable them to continue operations against the Islamic State of Iraq and al-Sham (ISIS) in Syria.

Concerning the issue, the Foreign Ministry on Wednesday summoned U.S. Ambassador to Turkey John Bass and Russian Ambassador Andrey Karlov, separately. Diplomatic sources said Bass was told about the PYD lacking good intentions and that the weapons might pass on to the PKK somehow, a development that would threaten Turkey's national security interests.

Speaking at a joint press conference after a meeting with Saudi Foreign Minister Adel al-Jubeir on Thursday, interim Foreign Minister Feridun Sinirlioğlu said Ankara's message to the PYD is clear. He said: "I urge [PYD Co-Chair] Salih Muslim to use common sense, to watch his steps. It would not be favorable for him to doubt Turkey's will and determinacy. Turkey is waging a fight against terror. Nobody should attempt to test its determinacy in this fight," adding that the necessary response would be given in the event of their resorting to any action.

Prime Minister Ahmet Davutoğlu expressed Ankara's concerns on Tuesday and said Ankara will treat the PYD the same as the internationally recognized PKK terrorist organization if it transfers weapons to the PKK and poses a threat to Turkey. "We will not allow arms stored in Syria to get into Turkey, and this has been conveyed to both the U.S. and Russia," Davutoğlu said.

The U.S. dismissed claims so far that it airdropped ammunition to the YPG and said the delivery was acquired by Syrian Arabs. A U.S. official from the Office of the Secretary of Defense, Elisa Smith, told Daily Sabah on Wednesday: "We've said that this airdrop supported Arab groups. We share the concern of our Turkish partners over the sensitivity of expanding Kurdish control into traditionally non-Kurdish areas in Syria."

Smith further said: "This successful airdrop provided ammunition to Syrian Arab groups whose leaders were appropriately vetted by the United States and have been fighting to remove [ISIS] from northern Syria. The airdrop included small arms ammunition."

However, speaking to PKK-affiliated Fırat News Agency, PYD Co-Chair Salih Muslim contradicted the U.S., saying the U.S. air force airdropped 50 tons of weapons and ammunition to its armed YPG, adding that the delivery was received by them and the U.S. will continue to deliver arms.

"If Turkey attacks Rojava we will defend ourselves," Muslim said in the interview, and threatened to retaliate in the event of Ankara attacks it, adding that the YPG is preparing for an offensive in Raqqa and Jarabulus.

According to obtained information, after the PYD were to hand over the missiles to the PKK, the group plans to use the portable missiles, which can be fired from ground vehicles or helicopters, against Turkey's F-16 fighter jets.

After losing more than 200 militants in three months in TSK operations, the PKK reportedly used the PYD as a cover to have the missiles from the U.S., which currently supports the PYD's YPG in ground operations against ISIS in Syria.

The PYD has already asked U.S. officials for the missiles to be transferred and said the group will use the missiles to protect itself from Syrian regime airstrikes, since ISIS does not have an air force.

Speaking to Anadolu Agency on Thursday, a Pentagon official stressed that in the event of weapons falling into the wrong hands it will result negatively and they will not give anti-aircraft missiles. "It is not within our strategy. ISIS does not have airplanes. So there is no sense in giving surface-to-air missiles or shoulder-fired missiles to those groups," the official said, adding that they are aware of the threat created in the context of terrorism.