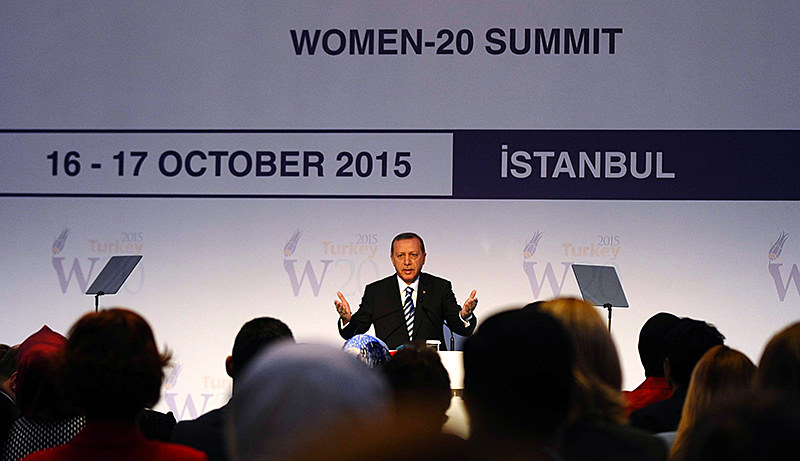 by daily sabah
Oct 16, 2015 12:00 am
President Recep Tayyip Erdoğan emphasized on Friday the importance of including women in the workforce, especially for G20 countries, to reach their growth aspirations in the opening of the W20 (Women-20) Summit, held in Istanbul.

President Erdoğan said that the female workforce in Turkey has increased to 32.3% and the percentage of female entrepreneurs has reached 8%.

The W20 summit is a group formed to support G20 nations by increasing the participation of women in the workforce. Turkey currently holds the presidency of G20, and is hosting the G20 summit.

Erdoğan also addressed issues related to terrorism. He called standing against terrorism a 'moral stance'. He said that it's unacceptable to differentiate between terrorist organizations.

He reiterated that Turkey was taking action against all terrorist groups, including PKK, ISIS, PYD and YPG.

The PYD is considered a Syrian extension of the terrorist PKK organization. YPG is the armed wing of the PYD in Syria.

"Turkey is against all terrorist organizations, regardless of their name, aim, discourse and method," Erdoğan said.

President Erdoğan also warned that those who do not support Turkey, but rather back specific terrorist groups are dragging the region into calamity.
Last Update: Oct 16, 2015 2:15 pm