Why the dictator of Syria went to Moscow 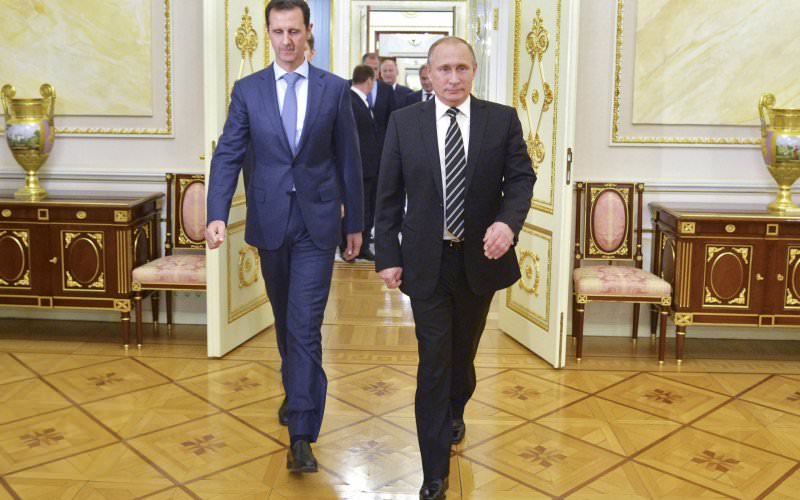 by Anadolu Agency Oct 22, 2015 12:00 am
The meeting between Syrian President Bashar Assad and Russian President Vladimir Putin was all about the political future of the country, experts said.

The Deputy Speaker of the Russian Parliament, Nikolay Levichev said on Wednesday that President Assad's visit to Moscow "reflects our desire to pursue political measures in the wake of military operations," RIA Novosti reported on Oct. 21.

"Meeting from Tuesday to Wednesday, the two leaders probably discussed Assad's eventual stepping down as president, and departure from the country," commented Russian political analyst Anatol Nesemyan in the Svobodnaya Pressa website on Wednesday.

"What form that process might take is still not clear," Nesemyan said. "Russia is apparently considering the formation of an interim government, for the transition from the Assad presidency."

Russia wants to present a plan to other nations when foreign ministers from Russia, United Stated, Saudi Arabia and Turkey meet in Vienna on Oct. 23. At this meeting, Russian Foreign Minister Sergey Lavrov and U.S. Secretary of State John Kerry are to discuss "real and tangible options that could perhaps reignite the political process and bring about a political transition in Syria," Kerry told the press on Monday.

"So it was essential for Russia and Syria to find a road map to a future political settlement," commentator Lyonid Isayev told Report Agency on Wednesday.

"Assad has hinted that, under certain conditions, he might be willing to leave his post. Putin and Assad have probably discussed a transition and settlement that would be acceptable to Western powers and key states in the Middle East," Isayev said.

Russian commentator Stanislav Tarasov pointed out in the Svobodnaya Pressa on Wednesday that Western countries have already announced a few options.

"The first is the need for the transition from the military phase of the crisis towards a political and diplomatic settlement. The second is the question of Assad's political future. The West is prepared to provide him a breathing space for up to six months, and, from the date of such an agreement, will begin a countdown towards an interim peace settlement," Tarasov said.

Tarasov adds: "The Americans are well aware that the crisis in Syria is a long-term issue, and that there may be a need to provide a transition period for Assad. Assad would probably not resign immediately once a settlement is reached."

Assad has improved his prospects for survival, according to commentator Grigory Trofimchuk. Writing in Report Agency, Trofimchuk said that Assad is also seeking to boost the morale of his supporters, who are losing faith in the regime's staying power.

For Putin, the discussion confirms his role as would-be power broker for the region, according to analyst Dmitry Trenin of the Moscow Carnegie Center, who spoke on ABC TV on Wednesday.