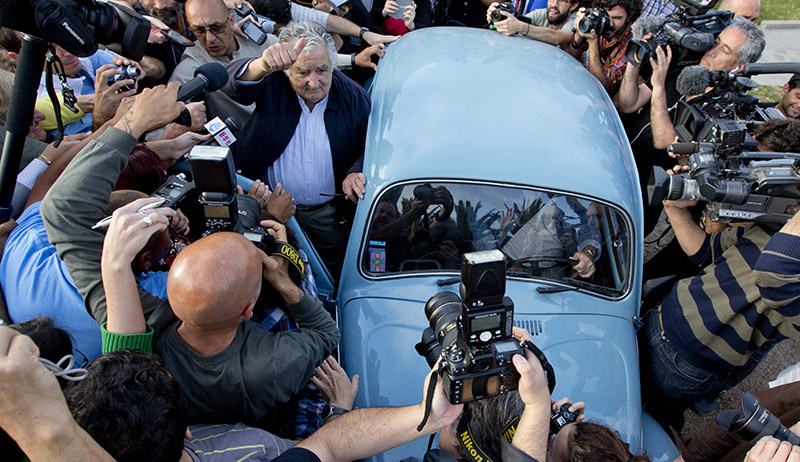 Uruguay's President Jose Mujica, center, leaves after casting his vote during general elections in Montevideo, Uruguay Sunday, Oct. 26, 2014 (AP Photo)
by daily sabah Oct 23, 2015 12:00 am
Jose Mujica, Uruguay's former president who is renowned for his modest lifestyle and being the world's poorest president will be visiting Turkey on October 29, the 92nd anniversary of the proclamation of the Republic of Turkey.

According to media reports, Mujica will be meeting with the Republican People's Party's (CHP) chairman Kemal Kılıçdaroğlu and visit a number of municipalities, including Şişli and Beylikdüzü municipalities in Istanbul, Konak in İzmir and Odunpazarı in Eskişehir during his 10 day visit to the country.

Born in 1935, Mujica was not an ordinary president and defied 'standards' by driving to the Chamber of Deputies on a Vespa when he was a deputy and refused to wear a tie. He also lived in a ramshackle farm instead of the presidential palace during his term as president. More importantly, he reportedly donated 90 percent of his presidential salary to charities.