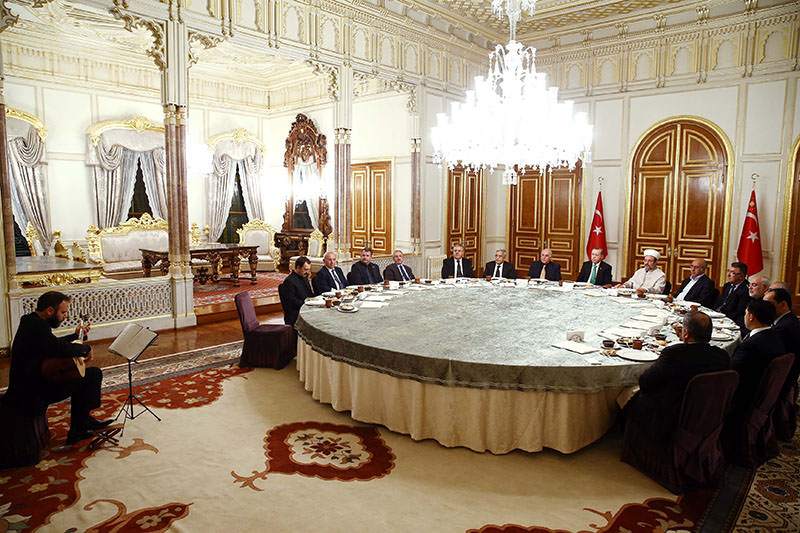 | AA photo
by daily sabah Oct 24, 2015 12:00 am
President Recep Tayyip Erdoğan on Friday evening hosted an iftar (fast breaking-dinner) for the representatives of Turkey's Alevi communities on the occasion of the Islamic month of Muharram, the first month of the Islamic calendar when Shiites and Alevis commemorate and mourn for the Battle of Karbala.

Muharram fast, or Alevi fast, is generally held in the first 12 days of the month of Muharram, which falls on a different day each year since Islamic lunar calendar is shorter than the solar calendar used in Western countries. This year, the start of Muharram falls on October 13.

The main purpose of Muharram fast is to mourn the death of Husain, the grandson of the Prophet Muhammad, during the battle of Karbala (in 680 AD), which falls on the 10th day of Muharram and is the most sacred day of the month.

It was on this 10th day of the Muharram, on October 23, that President Erdoğan came together with the representatives of Alevi communities in Mabeyn Mansion, an Ottoman pavilion in Istanbul.

The event was not open to the press, but as was reported by some of the participants of the dinner later on, the president listened to the problems of Alevi representatives, noted down their demands, and emphasized the importance of the month of Muharram in uniting all the Muslims as a time of mourning and peace.

The World Ehl-i Beyt Foundation head Fermani Altun reportedly said that all the fractions of society need to be embraced in Turkey, emphasizing the importance of the freedom of religion and freedom for conscious.

The AK Party government has been working on a new reform package which would attempt to tackle the age-old problems related to the country's Alevi community.

Alevis are the second largest religious faith community in Turkey. However, language, belief and ethnic background is not registered in the national census; therefore, it is not possible to have official statistics about the number of Alevis. On the basis of reliable academic research, the population of Alevis is estimated at approximately 20 million out of a total population of 77 million in Turkey.
Last Update: Oct 24, 2015 3:29 pm
RELATED TOPICS