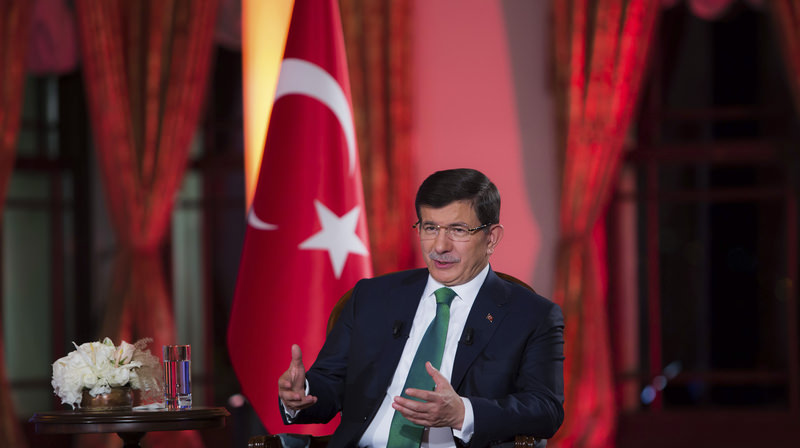 by Serdar Karagöz Oct 28, 2015 12:00 am
Prime Minister Ahmet Davutoğlu told a group of editors-in-chief of national newspapers on Monday evening that the PKK terrorist organization and its Syrian affiliate Democratic Union Party's (PYD) have tried to legitimize their existence by fighting the Islamic State of Iraq and al-Sham (ISIS), but Ankara's stance against these terror groups is clear and whoever is connected to the PKK is now a target for Turkey.

Davutoğlu said attempts to legitimize the PKK or its Syrian affiliate will not work, and that the PYD owed its existence and activities in Syria to the reconciliation process with the PKK. The almost three-year process ended when the terrorisr organization ended the cease-fire with the state on July 11. Davutoğlu likened the PKK ending the cease-fire to suicide and said the terrorist organization's plans will fail, adding that the Turkish government understood the PKK's real aim during Oct. 6-7, in which protests for Kobani turned into clashes among pro- and anti-PKK Kurdish groups, leaving over 50 people dead.Davutoğlu's comments came on the same day he confirmed that the Turkish military has struck the YPG, across the border in northern Syria twice. Davutoğlu said Turkey had previously warned members of the PYD to not go west of the Euphrates River and if they did, Turkey would attack. "We struck twice," the prime minister said, without giving further information. Prime Minister Davutoğlu has warned the PYD not to use weapons that were reportedly given to them by the U.S against Turkey. Davutoğlu has said the PYD would be hit like the PKK terrorist group if these weapons ever entered Turkey.

Furthermore, Davutoğlu said the fight against ISIS will continue with determination and that the militant group has enormous amount of agents in it, many of whom are from the Syrian regime's al-Mukhabarat intelligence agency. He said the founders of ISIS are those who were freed from prisons by the regimes in Iraq and Syria. Touching on the crisis still ongoing in Syria, Davutoğlu reiterated Turkey's significant role in solving it. "Can the Syrian question be resolved with an equation in which Turkey does not figure? Is there a formula for progress that does not include Turkey?" asked Davutoğlu.

The prime minister's remarks came as a response to allegations in the media that said "Russia, the U.S. and Iran are seeking a solution for the conflict in Syria, but not Turkey."

He said Bashar Assad would control all of Syria today if the formula under discussion were to be developed further, and added: "It cannot go further, because Turkey cannot leave the fate of its 911-kilometer border to other countries."

"Those who say this [that Turkey is not involved] do not know that our foreign minister launched a quadruple mechanism of Turkey, Russia, the U.S. and Iran in Vienna, and that the minister has gone to Paris to discuss it as well," said Davutoğlu.

He said the meeting in Paris would be held among the foreign ministers of the nine countries that are members of the Syria's Friends Group.

Commenting on media reports speculating about a possible civil war in Turkey, Davutoğlu said that Turkey's fight is against a terrorist group that mostly disturbs the Kurdish people with its terror activities.
RELATED TOPICS