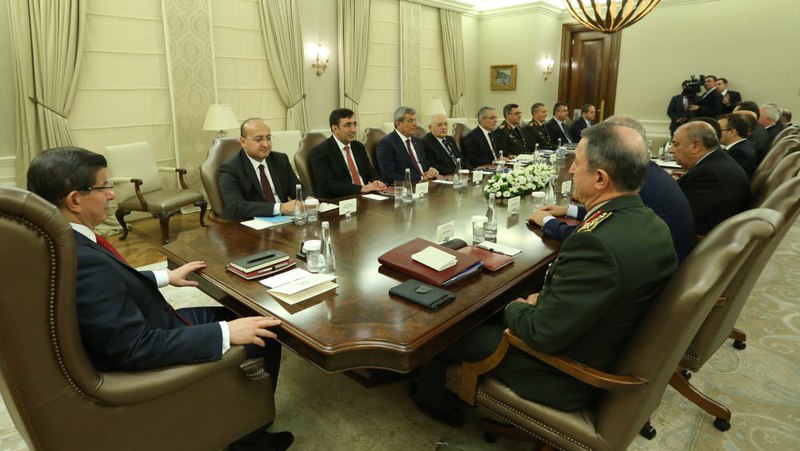 by Daily Sabah with AA
Nov 06, 2015 12:00 am
Turkey has plans to launch a military operation against the ISIS in the near future, Foreign Minister Feridun Sinirlioğlu said on Wednesday. Sinirlioğlu was at a conference on the future of the Middle East, held in Irbil in Iraqi Kurdistan. "ISIS threatens our way of life and security. ... We have plans to act militarily against them in the coming days. You will see. We should all stand together against this danger," he said. His statements came as Prime Minister Ahmet Davutoğlu was chairing a high-profile security meeting at the prime minister's office in Ankara.

Counterterror operations against the PKK in Turkey are planned for the winter, a statement released following the meeting said. Issues such as the terror threat against Turkey from Syria and operations against ISIS prior to the G20 Summit in Antalya were also discussed at the meeting. On Tuesday night around 40 fighter jets pounded PKK camps and hideouts both in Northern Iraq and southeast Turkey. Government officials say that in order to return to the reconciliation process, the PKK should first lay down its arms and the military operations will stop.

On the other hand, on top of participating in joint airstrikes with the U.S. on ISIS targets, Ankara is planning to expand its anti-ISIS fight to a higher degree.

ISIS is believed to have been behind the Ankara twin suicide bombings that killed 102 people. The Ankara Chief Public Prosecutor's Office said last Wednesday that an ISIS cell from Gaziantep, a southern province on the border with Syria, carried out the Oct. 10 bombings, which was the deadliest in Turkey's history. According to prosecutors, there is also strong evidence that the cell was responsible for the Suruç suicide bombing on July 20 that killed more than 30 pro-Kurdish activists.

The June 5 bombing at a People's Democratic Party (HDP) election rally in Diyarbakır that killed four was also pinned on ISIS. Since the Ankara bombings, there has been an increase in police operations against ISIS supporters in Turkey. Turkish jets on Saturday joined U.S.-led coalition forces in an operation targeting ISIS positions near the Turkish-Syrian border. The operations left more than 50 ISIS militants dead and 30 injured, Turkish security sources said.

Sinirlioğlu said Turkey would continue supporting Iraq and Northern Iraq's Kurdistan Regional Government (KRG) in the fight against ISIS. "We will continue our efforts to eliminate all terrorist organizations. We will act in a responsible manner so that the Kurdish region and Iraq can be successful in the fight against terror. This is a very clear message to Iraq and the Kurdish region for a bright future," he said. Sinirlioğlu also commented on what is commonly known as the reconciliation process, which was officially initiated in early 2013 and was aimed at ending the 30-year conflict between the Turkish state and the PKK.

The PKK has renewed its armed campaign against security forces following the Suruç suicide bombing, effectively bringing the process to a standstill.

The goal of the process was to ensure that democratic politics would replace terror. However, none of the promises [regarding laying down arms] were kept. ... We continued dialogue, but it turned out that the PKK didn't care at all about the promises made," he said.

"If democratic politics are of importance, then weapons must be laid down. Armed militants are unthinkable in a democratic process. The presence of a terrorist organization in the reconciliation process is unacceptable," he said.

KRG sources further said Sinirlioğlu held bilateral talks with KRG President Masoud Barzani as well as other officials in the region. It was reported that they discussed adding a pipeline to the Irbil-Ceyhan oil pipeline, as the KRG has an active role in northern Syria.

Following the previous conflict between Baghdad and Irbil due to oil exportation to Turkey, it was reported that the Turkish government is holding talks to establish an additional pipeline along with aiming to gain the upper hand in international arbitration. Since July, more than 100 members of security forces have been killed, as well as hundreds of PKK terrorists who were killed in air and ground operations across Turkey and Northern Iraq.