Police detain 20 ISIS suspects in Antalya ahead of G20 summit, 41 others deported 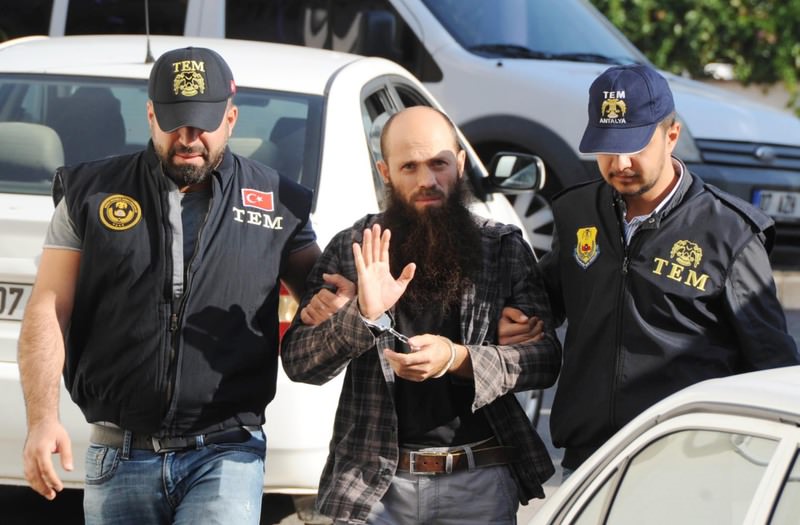 A police unit taking an ISIS suspect into custody in the Mediterranean province of Antalya on Friday.
by daily sabah
Nov 07, 2015 12:00 am

Police detained 20 ISIS suspects at a Mediterranean resort in Antalya on Friday, barely 10 days ahead of the G20 summit. Additionally, 41 other people were deported after being detained at Istanbul's Atatürk International Airport

Police detained 20 ISIS suspects in a Mediterranean resort in Antalya on Friday, barely 10 days ahead of the G20 summit. Additionally, 41 other people were deported after being detained at Istanbul's Atatürk International Airport on Wednesday. Turkey has been on the hunt for ISIS militants since a twin suicide bombing at a peace rally in Ankara on Oct. 10 killed 102 people and wounded around 500, the worst such attack in the country's history. The summit will take place on Nov. 15-16 and provide a major security test for Turkey. This will be the first G20 summit in Turkey since it assumed the G20 revolving presidency last year.

Authorities say security for the summit will be high as U.S. President Barack Obama, European Union, Russian and Chinese leaders and other important heads of state will be in attendance.

The Istanbul Security Directorate's Counterterrorism and Intelligence branch says its officers detained 40 Moroccans and a Syrian national who arrived at the city's Atatürk International Airport from Casablanca on Wednesday.

The suspects were taken into custody and interrogated at the airport. Police said some of those held claimed that they were going to Syria to join ISIS. Twenty of the suspects were deported on Thursday and the remaining 21 were sent back to Morocco on Friday afternoon.

Belek, a popular vacation resort in southern Turkey, is preparing to host some of the world's most important leaders. A favorite Mediterranean destination of both foreign and domestic tourists, Serik in Antalya will house the 13,000 visitors attending the G20 Summit.

It will be an "extraordinary" event for Antalya, Governor Muammer Türker said. The city will deploy 12,000 security personnel to protect the summit's 13,000 visitors.

The hotels housing the summit's attendees will be separated from the rest of the neighborhoods and only accredited visitors will be granted access to the area. Türker said they installed more than 350 new cameras, license plate and facial recognition systems in the area to prevent unauthorized access.

Coast Guard boats will be deployed off the coast to prevent any security threats from the sea. Officials are also considering establishing a no-fly zone over the area.

Türker said although they would allow "peaceful" protests, the area where hotels and convention centers are located and routes leading to them will be off-limits to all protesters.

Türker said they have planned for every worst-case scenario and have taken every measure to prevent and respond to any security or health emergency.

Since the deadly twin Ankara bombings, authorities have intensified the fight against ISIS and detained dozens of suspects in raids across the country.

In May 2014, the counterterrorism unit of the Istanbul Police force established "interview rooms" in airports, and since then has interrogated over 2,500 passengers suspected of having ties with terrorist organizations.Some 40 police teams, often dispatched to airports and bus terminals, have received special training in profiling, risk analysis, tracking and interrogation methods. It was reported that the police officers involved in these duties speak other languages such as English, French, German and Arabic.

A total of 23 questions, prepared by experts, are asked in interrogations. More than 550 passengers have reportedly confessed to having intentions to join ISIS and were then deported.

An official reportedly said 20,000 people have been banned from crossing the Syrian border in an effort to prevent foreign fighters from entering Syria through Turkey. In late June the official number for those deported by Turkish authorities was 1,350.

Regarding accusations that Turkey's border security is subpar, sources said Turkey shares a 1,300-kilometer border with Iraq and Syria, which is difficult to control. Nevertheless, sources say that the Turkish Land Forces Command patrols the land border 24 hours a day with drones and reconnaissance aircraft. Furthermore, it has installed lights on a 270-kilometer stretch of the Syrian border; renewed a 1,210-kilometer patrol route; started digging 363 kilometers of trenches and building 90 kilometers of wire fences, 68 kilometers of embankments and 7 kilometers of concrete walls. Sources stated that more than 48,000 border crossings were intercepted, and 175,000 people were caught since 2011.