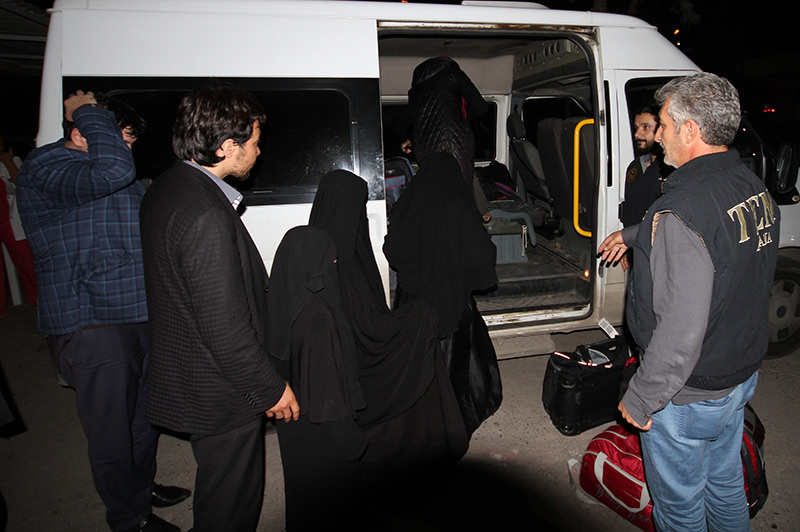 | AA Photo
by Daily Sabah with Agencies
Nov 09, 2015 12:00 am
Turkish anti-terrorist police have detained 38 foreigners including women and children who were reportedly seeking to join ISIS in Syria.

The suspects held in the southern province of Adana included nationals from Iraq, Iran, Indonesia and several central Asian nations, the Anatolia news agency said, without specifying when they were detained.

Among them were 15 children and 10 women. Two Turks were also held for helping the group.

"Twelve individuals who are members of ISIS terrorist organization were taken into custody in Karkamiş district, Gaziantep," Turkish General Staff said in a statement on its website.

Turkey has gone on the offensive against ISIS suspects ahead of the G20 summit in the Mediterranean resort of Antalya and after a spate of bloody attacks blamed on the terrorists.

World leaders including US President Barack Obama, Vladimir Putin of Russia and China's Xi Jinping will be attending the G20 gathering on November 15-16, with the focus likely to be on the Syrian conflict, the war against ISIS and the refugee crisis.

The Istanbul Security Directorate's Counterterrorism and Intelligence branch says its officers detained 40 Moroccans and a Syrian national who arrived at the city's Atatürk International Airport from Casablanca last Wednesday.

In May 2014, the counterterrorism unit of the Istanbul Police force established interview rooms in airports, and since then has interrogated over 2,500 passengers suspected of having ties with terrorist organizations.

Some 40 police teams, often dispatched to airports and bus terminals, have received special training in profiling, risk analysis, tracking and interrogation methods. It was reported that the police officers involved in these duties speak other languages such as English, French, German and Arabic.

A total of 23 questions, prepared by experts, are asked in interrogations. More than 550 passengers have reportedly confessed to having intentions to join ISIS and were then deported.

An official reportedly said 20,000 people have been banned from crossing the Syrian border in an effort to prevent foreign fighters from entering Syria through Turkey. In late June the official number for those deported by Turkish authorities was 1,350.

Regarding accusations that Turkey's border security is subpar, sources said Turkey shares a 1,300-kilometer border with Iraq and Syria, which is difficult to control. Nevertheless, sources say that the Turkish Land Forces Command patrols the land border 24 hours a day with drones and reconnaissance aircraft.

Furthermore, it has installed lights on a 270-kilometer stretch of the Syrian border; renewed a 1,210-kilometer patrol route; started digging 363 kilometers of trenches and building 90 kilometers of wire fences, 68 kilometers of embankments and 7 kilometers of concrete walls. Sources stated that more than 48,000 border crossings were intercepted, and 175,000 people were caught since 2011.

Anti-terrorism police have rounded up dozens of ISIS suspects in recent weeks including 20 held in the G20 host city of Antalya last Friday.

The Turkish government has intensified its counterterror operations following recent attacks and killings of policemen and civilians.

On October 10, an ISIS-linked terrorist named Yunus Emre Alagöz conducted a suicide attack in the capital Ankara and claimed the lives of over 103 and left hundreds more wounded. Alagöz was the brother of Şeyh Abdurrahman Alagöz, perpetrator of July's bombing in Suruç district of southeastern Şanlıurfa province, which claimed the lives of 32 and left many injured.

Along with ISIS, Turkey has been fighting PKK and other leftist terrorist organizations.