MHP, CHP in turmoil as crises deepen with new candidates 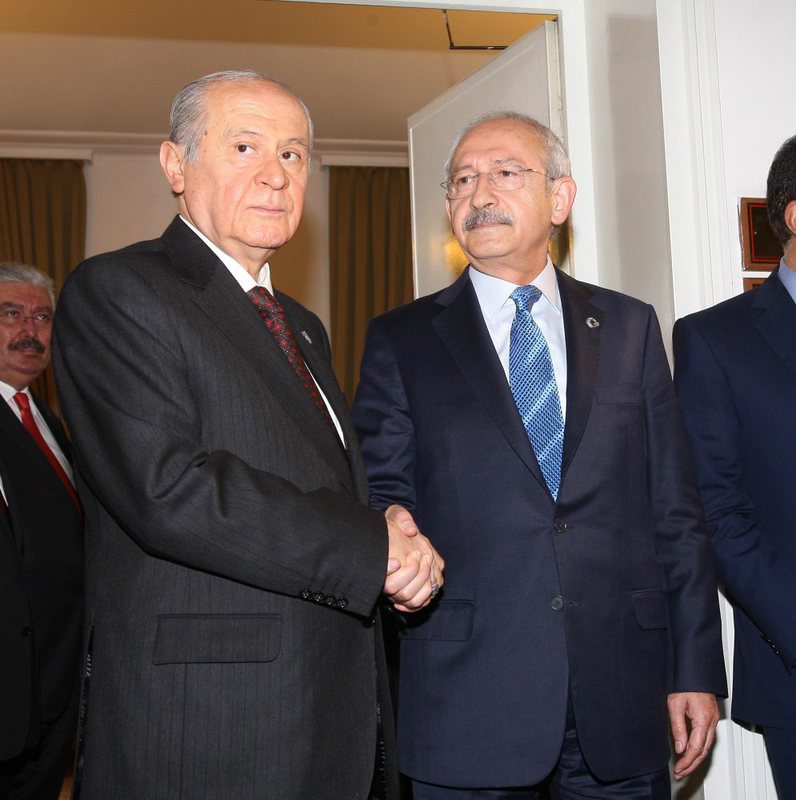 The repercussions of the Nov. 1 elections continue to affect the chairmen of the MHP and CHP negatively with the candidates for chairmanship and dissidents trying desperately to collect enough signatures to hold extraordinary party congresses as early as 2016

The outcome of the Nov. 1 elections continues to bear sour fruit for the Republican People's Party (CHP) and Nationalist Movement Party (MHP) as intra-party conflicts bring out new candidates for the two parties' chairmanships. Dissidents in the parties are also trying their best to acquire enough signatures to call for extraordinary congresses.

The MHP congress is slated for March 18, 2018 when MHP Chairman Devlet Bahçeli's opponents might finally have their very late say on Bahçeli's "intransigent approach and arguable failure to take the opportunity to lead a coalition government when the chance was there to be taken. Dissidents inside the party, however, do not want to sit and wait until 2018. For this reason, Turkish media outlets speculate that opponents in the party are making firm progress but moving quietly. They need to acquire 270 signatures to call an extraordinary congress.

The first person to declare their candidacy for the MHP chairmanship was Selim Kaptanoğlu. Dr. Sinan Oğan, who was expelled from the party after the June 7 elections but reclaimed his membership following a court decision, is also expected to announce his candidacy on Monday.

Meanwhile, most party members expect Meral Akşener to announce her candidacy as well. Akşener, however, still seems to be hesitant to do so. Inside sources claim that Akşener changes her mind often about whether to run or not.

Under pressure from party members and supporters following the Nov. 1 election results, MHP leader Bahçeli is keen to hold on to his position by preventing party members from reaching 270 signatures. According to reports, Bahçeli and his supporters are keeping a close eye on possible candidates and their supporters. Some believe he will try to expel future opponents for the chairmanship from the party in order to block an extraordinary congress.

Amid turmoil and different voices inside the party, Vice Chairman Karakaya argued yesterday that external forces may be attempting to take hold of the MHP. Mevlüt Karakaya, however, ruled it out as a possibility.

The MHP received 16.3 percent of the vote in the June 7 elections, yielding 80 seats in Parliament, but the party's failure on Nov. 1 saw the party lose 5 percent of the national vote, leaving it with 11.9 percent. The MHP also lost half of its seats in Parliament over the course of five months and now has the fewest seats of all parties in Parliament. Bahçeli's defeat is unsurprising considering his political record, since the MHP has lost more than 15 elections while he has been at the helm. Rumors were abounding whether he would resign after a dramatic loss of votes on Nov. 1.

KILIÇDAROĞLU'S OPPONENTS SEEK 600 SIGNATURESCHP Chairman Kemal Kılıçdaroğlu's opponents are now exerting all their efforts to take the party to an extraordinary congress with party figures continuing to declare their candidacies for the chairmanship. Meanwhile, 77 provincial chairmen Thursday voiced their support for the general congress in early January. The provincial chairmen also stressed that Kılıçdaroğlu did his best to represent the CHP in the run-up to the Nov. 1 elections.

CHP spokesperson, Vice Chairman Haluk Koç, on Tuesday explained that the CHP will hold its congress in the first 15 days of January whether 600 party members decide to sign an extraordinary congress declaration or not.

İnce on Monday levied harsh criticism on Kılıçdaroğlu, saying that a leadership that has lost six elections would not win a seventh, pointing out the CHP's failure to increase its vote share in the Nov. 1 elections.

İnce voiced his frustration with the leadership, stressing that the vote the CHP receives has made no headway. "The CHP is still getting 25 percent [of the vote]; we need to dust ourselves off. Those responsible should be held accountable for this. If President [Recep Tayyip] Erdoğan goes to a referendum for a presidential system, he will win the referendum," İnce said.

İnce previously ran for the CHP chairmanship in the extraordinary congress held in September 2014 and lost to then and current CHP Chairman Kemal Kılıçdaroğlu. Meanwhile, 42 chairs from provincial organizations, which were elected as delegates in the last congress, made a call on Sunday for the party to hold a special meeting as soon as possible.

Along with swords drawn for the party chairmanship, there is also an increasing tone of criticism from several pro-CHP figures in the media. On Tuesday, Bekir Coşkun, columnist for Kemalist daily Sözcü, wrote a column saying Kılıçdaroğlu must leave his position due to the electoral defeat and that the CHP needs new leaders. "After losing eight elections to [the AK Party], what does a person wait for to leave?" he asked, adding that it is impossible to pretend nothing happened.

As coalition talks started, the CHP sat at the table with the AK Party and put forth the two unchangeable conditions that foreign policy and education policy must be rewritten from scratch, demanding the AK Party abandon its policies on education and foreign affairs. The CHP had been expected to increase its votes in the June 7 elections due to its arguably successful pledges to youth and retirees. The outcome, however, was 5 percent lower than Kılıçdaroğlu had anticipated.Going into the Nov. 1 elections, the CHP called on its voters to vote for the CHP, trying to reclaim the custodial votes that went to the HDP in the June 7 elections. In its campaign for Nov. 1 the CHP emphasized issues concerning the youth and pensioners, but the party's efforts increased its votes 0.36 percent. Kılıçdaroğlu seems to be following in his predecessor Deniz Baykal's footsteps. Even though a new face brought new expectations, some CHP voters now question Kılıçdaroğlu's future after the most recent failure, struggling to pass 25 percent.
Last Update: Nov 13, 2015 10:59 am