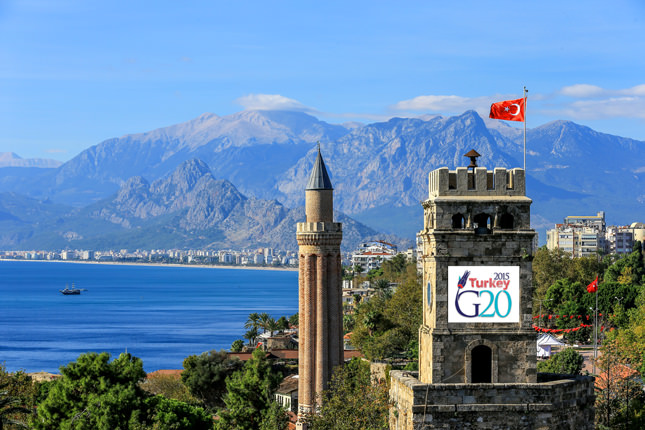 by Anadolu Agency
Nov 13, 2015 12:00 am
President Recep Tayyip Erdoğan said on Thursday that participants in the G20 summit in Antalya will not forget the event, claiming it would be the most productive and dynamic conference among the meetings held so far.

Erdoğan said: "We've had an important preparation process and it has been successful. I believe both we, as a host country, and our guests will find a very different atmosphere here, compared to the former ones, in terms of places where they will stay and places where they will meet -- and it will be an Antalya summit, which they [the participants] will not forget."

Erdoğan was answering questions from Hasan Oymez, editorial director of the Turkey News Department of Anadolu Agency at Mabeyn Palace in the Besiktas district of Istanbul.

Reminding that the first meeting of G20 was held in Washington in 2008, Erdoğan stated that he had attended all the G20 summits except for the 2014 one in Brisbane, Australia.

"G20 is a forum where economic components come together in the world but is it only limited to this? No. Very different subjects in the world's agenda could emerge, especially during the working dinners. For example, climate change is one of the subjects that will be discussed during the working dinners. International terrorism is again one of the important topics that we will discuss," Erdoğan said.

Thirty-five groups including Turkey, the European Union, 20 countries and various international organizations, will come together during the summit, the Turkish president noted.

"There are six groups [within the G20]. There is a businessmen group, labor group, non-governmental-organizations' group. There is a group called, 'Young-20' and B20. We've also added Women 20 to these groups in our term."

Erdoğan said the W20 was one of the first; and the summit would also cover the topics of energy, small-to-medium enterprises (SMEs), food security and climate change, in addition to international terrorism, which would be discussed over a working lunch.

Noting that each G20 has its own specific headlines, Erdoğan listed Turkey's priorities as "inclusiveness, investment and implementation".
Erdoğan said that youth, women and SMEs were within the scope of inclusiveness.

"Infrastructure investments are another important topic. Our goal for 2030 in this regard could surprise some people. What is this goal? An investment worth $80 to $100 trillion. So how will this happen? Here, the co-operation between the public and private sector is of great importance. If this step is taken with their co-operation, then there will be no problem.

"You cannot have superstructure without infrastructure investments. Therefore, the public and private sectors should work together in less-developed and developing countries... Turkey is one of the most important, and best, examples in this regard.

"We achieved this in the last 12 years, and will continue to do so in the same manner. What we call 'participation banking' in Turkey, some say it is Islamic banking. When we look at Islamic finance, I believe it would be a significant contribution if they got into this. Works in this regard are ongoing," he said.

Noting that the other priorities did not make sense without "implementation," Erdoğan said: "Who will be implementing? The executives. They should display a sound will at this point so that we can get results."

Stating that one of the working dinners on G20 will be about climate change, Erdoğan said:

"We made remarks about climate change under the leadership of the UN Secretary General with a conference system. During the remarks, there were the German Chancellor and myself on one side and esteemed [French President Francois] Hollande and the president of Peru on the other... By giving statements we will elaborate it in a detailed way at G20."

Erdoğan continued: "And of course here the emissions issue is very, very important. There are the ones who pass the limit and the others who don't. But while taking the real step (it must be considered) to succeed in a level of less developed or developing countries' level, developed countries should give financial support so these countries to take necessary steps against the elements that threaten climate change. As a matter of fact 30th November Paris Summit is a finale. In that summit these issues will be elaborated and the resolutions that come out of there will help to clear a step that threatens the future of the Earth, I believe, and we can get rid of a threat."

Stating that the G20 meetings have been mostly settled, Erdoğan said the program will start by Nov. 13.

Erdoğan said they will have bilateral and committee meetings with Japanese Prime Minister Shinzo Abe and they will host them at dinner.

"The meeting here will mostly finalize our meeting with Japan. After that, on the 13th and 14th of November we will have finished most of our bilateral meetings in Antalya. Nov. 14 -as you know-is not the starting day of summit but we will have enriched that day with the leaders who will come earliest and we will have made a use out of that day. I will host a dinner for every leader and their spouses that have managed to come on the night of Nov 14. On the 15th of November I will have my first bilateral meeting with Mr. [Barack] Obama. Before that, of course, I will address businessmen and the unions. These are the things we will do in the morning. Following that, we will have meetings with committees and even some international establishments. So I think that there will not be any leader that we have not met out of the leaders that arrive. We will try to meet all of them." the president added.

Erdoğan added that the rest of the meetings will be finalized during the summit.
Last Update: Nov 13, 2015 5:41 pm