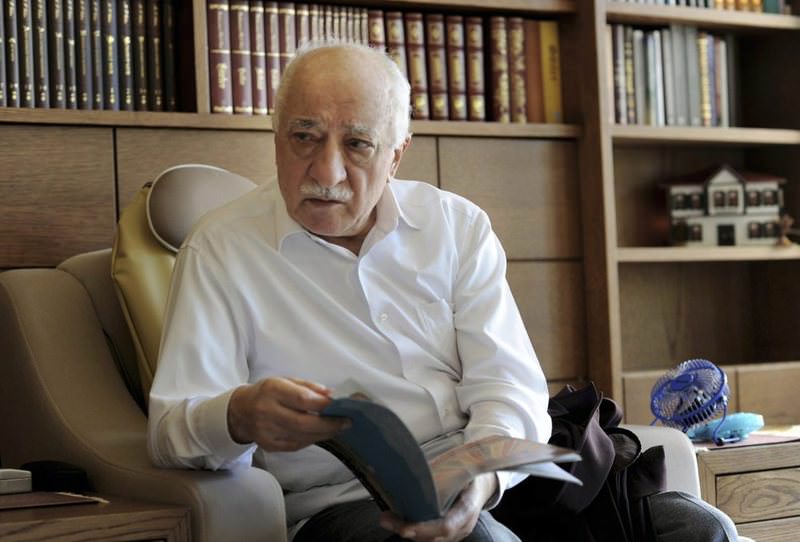 The Gülen Movement, which refers to itself as a peaceful movement involved in educational activities, is accused of committing serious crimes, including attempting to overthrow the government through the infiltration of state institutions and illegal wiretapping activities

The Leader of the movement, Fethullah Gülen, was born in Korucuk village in the province of Erzurum in 1941 and his movement started to shine out in the 1970s, especially in the western provinces of Turkey.

He had obtained a green passport in 1990, which is issued to high-ranking officials. Later on it was revealed that the documents were being obtained through irregular means and the Erzurum Governorship canceled the passport in March 2014.

It is not a coincidence that he started to appear in the media beyond him being a Directorate of Religious Affairs (DİB) official and in 1994, he participated in the founding of the "Journalists and Writers Foundation" and was given the title "Honorary President" by the foundation that was established by his followers.

On the eve of the post-modern coup on Feb. 28, 1997, the Gülen Movement had caused eyebrows to raise in many conservative circles by covertly siding with the military and it is salient that thousands of institutions linked with the Movement, including schools and prep schools, weathered the storm almost safe and sound, while imam-hatip schools and women with headscarves faced tyranny coming from the military tutelage.

Gülen's stinging remarks on the elected government led by the Welfare Party (RP) and True Path Party (DYP), even hit the headlines of newspapers, saying, "You could not deal with it, leave!" Not only siding with the stagers of the post-modern coup, he also wrote letters to top army generals, saying the movement is ready for their service.

Living in Pennsylvania, U.S. since 1999, his movement started to expand its network by opening charter schools, civil society organizations and movement-linked institutions. Opening its first school in the U.S. in Ohio in 1999, the movement now operates a vast network of schools on six continents, operates a large number of charter schools in the U.S. and several other countries.

He is now accused with leading a terrorist organization in which the members are seeking to overthrow the government and infiltrating top state institutions, including the police and judiciary, and wiretapping thousands of people including senior officials, journalists, actors, heads of nongovernmental organizations and others.

Gülen has three arrest warrants in three different cases. One of them is over illegal wiretapping in the Selam Tevhid case, in which the network led by Gülen is accused of wiretapping senior Turkish government figures, including the prime minister, National Intelligence Organization (MIT) chief, Cabinet ministers, as well as journalists through serving state officials. Also, on Oct. 19, Istanbul's High Penal Court issued an arrest warrant for Gülen and his aide Sinan Dursun for "attempting to stage a coup, establishing and masterminding an armed organization and political espionage" in Turkey. On Feb. 24, a Turkish criminal court in Istanbul issued an arrest warrant for Gülen and senior Gülenist figure Emre Uslu, again related to the FETÖ probe.

Istanbul's 13th Criminal Court had also issued a red notice on him and he is also on the list of Turkey's most wanted terrorists, pledging rewards for those who supply intelligence about him.

Chairman of the Fenerbahçe football club, Aziz Yıldırım and six other suspects had been accused with match-fixing in the 2011-12 season and later on have been acquitted of all charges. Yıldırım was released from prison two years later and he said that the case is "a plot" against him by the Gülen Movement.

The movement also targeted the Tahşiye group, known to be a branch of the Nur Movement and its members were imprisoned with false evidence and labeled terrorists by suspected Movement-linked police officers and prosecutors. The group and its leader, former imam Mehmet Doğan, are known for their opposition to the Gülen Movement and have a firmer stance against interfaith dialogue than other movements.

Gülen first targeted the Tahşiye Publishing House in 2009. In a speech, Gülen had alleged that the Tahşiye group had links with extremist organizations – including an al-Qaida-affiliated group – Hezbollah in Turkey, and the Islamic Great Eastern Raiders Front. Following his speech, the Gülen-linked Zaman daily made references to the issue on its pages along with other media outlets close to the movement while the Gülen Movement-affiliated channel Samanyolu TV depicted the Tahşiye group as a terrorist organization in the television series "Tek Türkiye" (One Turkey).

The Gülenist infiltration has also been accused with forging evidence in the Sledgehammer case, in which the Turkish Supreme Court had sentenced the defendants to a six to 20 year imprisonment in September 2012, who had been accused with attempting a military coup.

All defendants were freed after the Constitutional Court's verdict in June. The defendants had claimed that all documents implicating them in the case were forged. One of the most striking allegations about the forged evidence is that an allegedly authentic Microsoft Word document detailing the coup plan conceived in 2003 was written in a 2007 version of the word processing software.

The Movement has also long been claimed to be behind a murder plot and was accused of trying to shift the blame for the murder to Ergenekon, an alleged gang of generals, journalists and several prominent figures imprisoned in a trial conducted by Gülenist prosecutors.

Illegalities at schools in U.S. and lobbying efforts

Previously a published USA TODAY story revealed details of 200 suspiciously funded trips arranged by the Gülen Movement. The investigation found many relevant congressional disclosures that were apparently false. USA TODAY said, "A dozen different Gülen groups have sponsored congressional travel since 2008 and have filed forms with the House certifying that they were paying for the trips. The House Ethics Committee approved all the trips in advance based on the forms the Gülen groups submitted."

The Gülen Movement's schools have faced criticism from different circles, and the FBI previously raided the Kenilworth Science and Technology Charter School in Louisiana. In 2014, the Federal Bureau of Investigation raided 19 charter schools affiliated with the Gülen Movement in Ohio, Indiana and Illinois for reasons allegedly related to crimes linked to education tenders. Another charter school was shut down in 2011 for bribery charges.

Currently, the Gülen Movement operates 140 charter schools in 26 states in the U.S.

On Oct. 26, the international law firm of Amsterdam & Partners LLP in Washington announced their engagement on behalf of the Republic of Turkey to assist in the investigation into the global activities of the movement.

Intolerant of criticism, several prosecutors close to the movement had jailed journalists Ahmet Şık, Nedim Şener and former Police Chief Hanefi Avcı for releasing books critical of the Gülen Movement. Released after prolonged jail terms without reasonable cause, Şık, Şener and Avcı claimed they were targeted by Gülen Movement-linked prosecutors and judges who leveled charges of being members of a terror network without any concrete evidence.

On Aug. 15, Gülen Movement-affiliated figures commented on the increasing likelihood of early elections after coalition talks failed, making allusions to coup attempts to end the impasse. On her Twitter account, Sevgi Akarçeşme, a columnist with Zaman and Today's Zaman, posted a tweet that said: "Thanks to AKP for proving the argument that Islamists come with elections but do not go with elections!" Bekir Çınar, a Gülen Movement-affiliated academic, responded to her, saying: "The AKP leaves power either by streets or military intervention." In April, fabricated Gülenist media reports targeted Uighurs, who were forced to seek refuge due to the Chinese government's religious, cultural and language restrictions as well as ethnic discrimination policy. In the report, it was claimed that ISIS was given more than 100,000 fake Turkish passports under the government's authorization and these passports were used by Uighurs escaping to Turkey to enter Syria and join ISIS.

The Movement, which has infiltrated key governmental bodies for years, was uncovered for the first time in the Feb. 7 operation when Istanbul's specially authorized prosecutors, Sadrettin Sarıkaya and Bilal Bayraktar, who are considered followers of the Gülen movement in the judiciary, issued a summons for MİT Chief Hakan Fidan for collaborating with the outlawed PKK organization.

The Movement is also accused with overthrowing the government in the Dec.17 and Dec.25 investigations and former Zaman daily columnist and senior figure of the Gülen Movement, Hüseyin Gülerce said the Dec. 17 and Dec. 25 operations were "an all-out attack," and added that he tried to stop Gülenists from conducting the operation. "[The Dec. 17 and Dec. 25 operations] were never bribery and corruption investigations for me. It was the third step after the Feb. 7 MİT [National Intelligence Organization] crisis and Gezi Park protests. I have a clear conscience about that," Gülerce said.

The Gülen Movement's promotion of superstitions, sorcery and dreams have been particularly criticized as many critiques claim the movement is withdrawing from reality to avoid facing the fact that their strength is decreasing as they are economically, socially and psychologically shrinking.

Last year, leaked recordings of Fethullah Gülen's phone conversation with an official from pro-Gülenist TUSKON (the Turkish Confederation of Businessmen and Industrialists) became controversial. In the phone conversation, the official tells Gülen that the Prophet Muhammad told him to double the amount of tweets, and Gülen responded affirmatively and said "do whatever he tells you to do."

His followers have also claimed that the Prophet was present at the Turkish Olympics organized by the Gülen Movement. This claim was published in an online article, which stated that Fethullah Gülen received many letters about the Prophet attending the Turkish Olympics. "Believe me, our beloved Prophet has honored our organization" Gülen was quoted as saying.
RELATED TOPICS