Survey: Support for AK Party at 54 pct, HDP below threshold 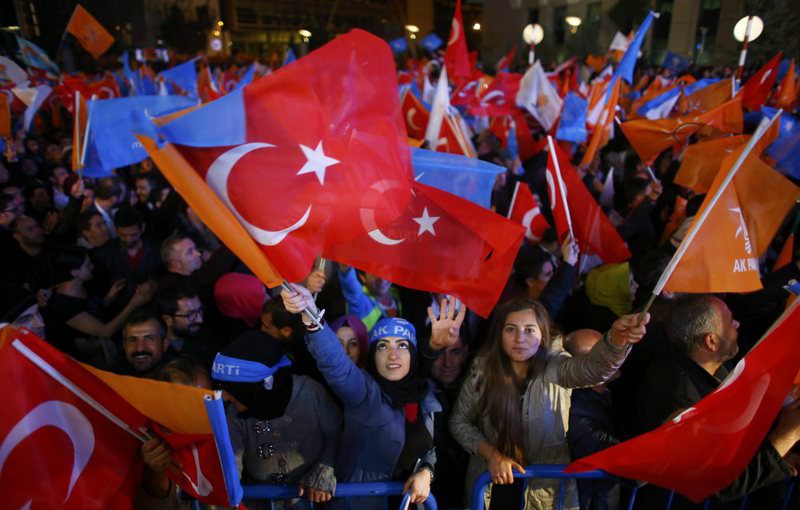 A recent survey conducted by the ORC revealed that if elections were held today the AK Party would take 54 pct of the vote while the HDP would not cross the 10 pct threshold. 90 pct of the participants also want a new constitution

Shortly after the Nov. 1 elections, the Ankara-based Objective Research Center (ORC) conducted a public survey regarding the political agenda of Turkey and released its results on Friday. The report suggests that more than 54 percent of participants would vote for the Justice and Development Party (AK Party) if there were another election held today.

The survey further revealed that 76 percent of respondents were satisfied with the recently held elections in which the AK Party achieved a landslide victory, claiming 49.5 percent of the national vote. Though the survey companies were slightly off with their election predictions, the latest ORC survey indicates that the Peoples' Democratic Party (HDP) would not pass the electoral threshold in the case of a new election.

As intra-party turmoil continues within both the Nationalist Movement Party (MHP) and the Republican People's Party (CHP) due to multiple election defeats, the latest public survey indicates that 22 percent of MHP voters participating in the survey voted for the AK Party in the recent elections, while nearly 3 percent of CHP supporters voted for the AK Party.

The survey shows that support for MHP dropped from 12 percent to 10.5 and support for the CHP saw little change.

Ipsos, a Paris-based research institute also released the results of a recently conducted study on which showed significant changes in the major political parties' share of votes. The research was prepared for private broadcaster CNN TÜRK and conducted in the all 81 provinces across Turkey with 1614 voters over the age of 18. The research which has an error margin of 2.4 percent indicates major changes in the voters' decisions after the election results were announced.

In the research, the voters were asked whether they would change their decisions if they had seen the results beforehand. While the social democrat Republican People's Party (CHP) and pro-Kurdish Peoples' Democratic Party (HDP) voters seemed uncompromising as the percentage indicated the same figures for the both parties, 25 and 11, respectively, conservative Justice and Development Party (AK Party) and Nationalist Movement Party (MHP) votes seemed to differ from the unofficial results of the November 1 snap elections.

3 percent of the MHP voters said that they would not vote for the party, which is significant as a 9 percent of total votes would deter nationalist deputies from entering the parliament and that would give AK Party extra deputies especially from the provinces in central Turkey and the Black Sea region.

The number of AK Party voters seemed to increase by 4 percent, putting the party to 53 percent. On such an occasion, with the MHP below the 10-percent electoral threshold, AK Party would muster a super majority with approximately 345 deputies in the 550-seat parliament, enabling it to go for a referandum to make constitutional changes, as the election simulation below shows.