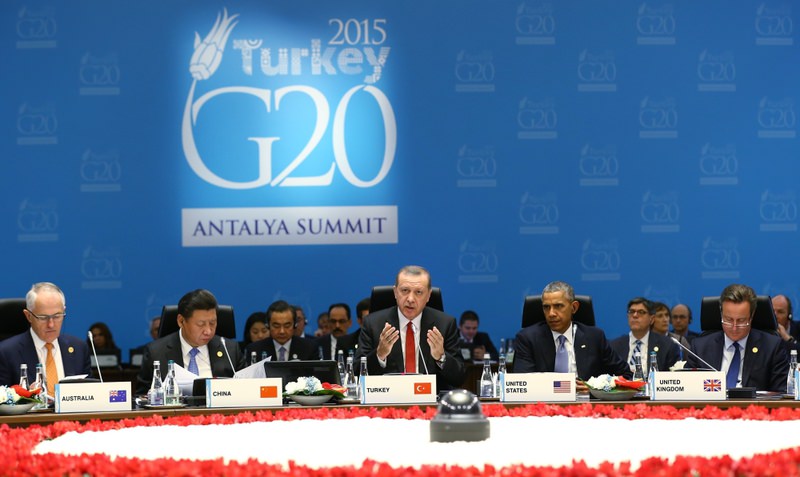 As the G20 summit brings the most important political leaders together to focus on the most significant issues afflicting the world, President Erdoğan welcomed everyone to Turkey and laid strong emphasis on the need to tackle international terrorism, saying: ‘Terror has no religion, nation, race or motherland'

Welcoming leaders from around the world one after another to Antalya for the G20 Leaders Summit, President Recep Tayyip Erdoğan reiterated Turkey's sensitivity to terror and urged the world to join its forces in the fight against all kinds of terror. Explaining that Turkey has been struggling with terror for a long time, Erdoğan said: "We are sensitive to this matter as a country that has been fighting against terror for 35 years. We are a country that knows quite well what it brings and what it takes away." Giving his view on terror, Erdoğan said he believes terror is collective and the world should carry out the fight against terrorist attacks in the form of coalition.

"We were already going to talk about what can be done against international terror at the G20 summit, yet this incident [in Paris] has brought up a whole different agenda," Erdoğan said. Saying that there should be a joint platform for the fight against terror, Erdoğan argued that the Paris attacks that claimed the lives of at least 129 people and wounded well over 200 prove its necessity. He also talked about the twin suicide bombings in Ankara on Oct. 10, which was the deadliest attack in Turkey. "As you know, 102 of our citizens were the victims of a terrorist attack in Ankara in early October. Nearly 300 citizens were also wounded and some of them are still receiving treatment."

He said Turkey has previously experienced bitter terrorist attacks as well and asserted that the fight against terror continues. "In the same way we experienced similar incidents in Suruç, Gaziantep and Diyarbakır, our fight against terror continues partially on a daily basis because we know that terror has no religion, nation, race or motherland."

As president of a country that has been reeling from terrorist attacks whether by the Islamic State of Iraq and al-Sham (ISIS) or the PKK, Erdoğan has often called on the international community to take a clear stance against terror. Erdoğan warned world leaders days before the Paris attacks, saying that there cannot be a good or bad terrorist. "If a principal stance is not presented against terror, this fire will spread all over the world," Erdoğan said, adding that those fueling the fire in Syria could find themselves burning in that very fire. Erdoğan wrote an opinion column for Project Syndicate, which is an international association that provides commentaries and surveys from around the world, in which he called on G20 countries to confront "our era's geopolitical challenges." He also mentioned the Paris attacks: "The terror attacks in Paris have brutally reminded us, once again, that global challenges such as terrorism, the war in Syria, and the refugee crisis require truly global responses."

Erdoğan called for an end to the civil war in Syria. "The Syrian civil war, now well into its fourth year, must be brought to an end, and a fair and sustainable political transition must be ensured," he said.

While the world suffers greatly from ISIS and the biggest refugee crisis since World War II, Erdoğan pointed to Bashar Assad's regime as the greatest reason. "The conflict and the brutal state terrorism of Syrian President Bashar Assad's regime is not only the cause of terrible suffering in Syria and the death of more than 360,000 people, it is also the root of the refugee crisis and the emergence of ISIS – a threat to all countries," Erdoğan argued.

He urged the international community to address the refugee crisis and brought up Aylan Kurdi, who washed ashore on a Turkish beach and whose image shook the world. "[M]any more like him are dying every day in the cold waters of the Mediterranean and the Aegean," Erdoğan said.

Repeating that Turkey is home to over 2 million refugees, who fled the war in Syria, and has spent more than $8 billion in this regard, Erdoğan reiterated: "The international community must agree on a mechanism that ensures the burden is fairly shared."
RELATED TOPICS