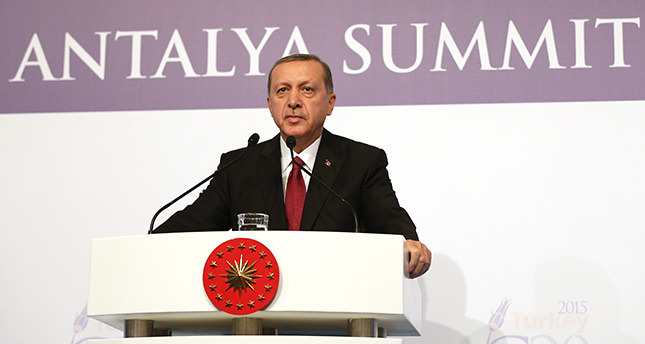 President Recep Tayyip Erdoğan at a press conference Monday to announce the results of the G20 summit in Antalya said it is impossible to overcome terrorism and the refugee problem caused by the ongoing Syrian war without a solution that everybody in the country accepted. Erdoğan said one of the most important outcomes of the summit is G20 countries' indicating a firm stance on the fight against terrorism and that they agreed to fight against terrorism without distinction. "Terror has no religion, nationality, race and country," he reiterated.

A joint statement on the fight against terrorism issued by G20 leaders the same day reads: "We unequivocally condemn all acts, methods and practices of terrorism, which cannot be justified under any circumstances, regardless of their motivation, in all their forms and manifestations, wherever and by whomsoever committed. We reaffirm that terrorism cannot and should not be associated with any religion, nationality, civilization or ethnic group." Erdoğan also said that Turkey is ready to shoulder the fight: "We are a country that knows well what terrorism is and faces its heavy results since the 1970s. We are ready to do our part at the point of international cooperation in the fight against terrorism."

Regarding cooperation, the joint statement said: "We are resolved to address this threat by enhancing our cooperation and developing relevant measures to prevent and tackle this phenomenon, including operational information-sharing, border management to detect travel, preventive measures and appropriate criminal justice response. We will work together to strengthen global aviation security."

Erdoğan said those who associate terror activities with refugees are trying to evade responsibility, and added: "We need to carry out work in the fight against terrorism and find a solution to the refugee crisis together. Moreover, we should not confuse the refugee crisis and terrorism. We need to be sincere in our solidarity in the struggle against this humanitarian crisis. We must set an example as G20 countries."

He also said that Turkey as a neighboring country to Syria with close links to Syrians has suffered from the long-standing crisis in Syria since the beginning. "We are hosting 2.5 million refugees. We have opened our borders for those people, regardless of their faith. This is a humanitarian duty," he said, adding that the crisis is so big that a single country can no longer overcome it by itself.

President Barack Obama says putting large numbers of U.S. troops on the ground to combat the threat from the DAESH would be "a mistake." He says that's not just his view, but the view of some of his closest military and civilian advisers. The president says the fight against the DAESH terrorist threat requires participation of the people in Iraq and Syria to push back against ideological extremes.

U.S. President Barack Obama rebuked some political figures in the U.S. that suggested a test for refugees to determine their religious views or strictly rejected the idea of hosting refugees. "Suggesting a religious test for fleeing refugees is shameful; it's not American," Obama said.

Obama also stressed that people fleeing Syria are the most harmed by terrorism. "It is very important that we do not close our hearts to these victims of such violence, and somehow, start equating the issue of refugees with the issue of terrorism," he added.
Last Update: Nov 17, 2015 9:12 am